After a few days of city hopping, Sean and I were ready to commune with nature. We spent the morning and early afternoon of our fourth day on the South Island in Oamaru before driving approximately 200 kilometers (125 miles) to the Mount Cook Village.

Mount Cook, also known as Aoraki, is the tallest peak in New Zealand. It rises 3,764 m (12,349 ft) above sea level. According to Maori legend, Aoraki was a young boy who, along with his three brothers, were the sons of Rakinui, the Sky Father. On their voyage around the Papatuanuku, the Earth Mother, their canoe became stranded on a reef. Aoraki and his brothers climbed onto the top of their canoe. However, the south wind froze them and turned them to stone. Aoraki, the tallest, became the highest peak, and his brothers created the rest of Southern Alps.

The drive along Lake Pukaki to Mount Cook Village is absolutely stunning if you’re able enough to catch it on a clear day. Mount Cook is notoriously shy and often covered in mist. We were lucky, though, and as we drove north from Twizel got our first glimpse of this breathtaking mountain. 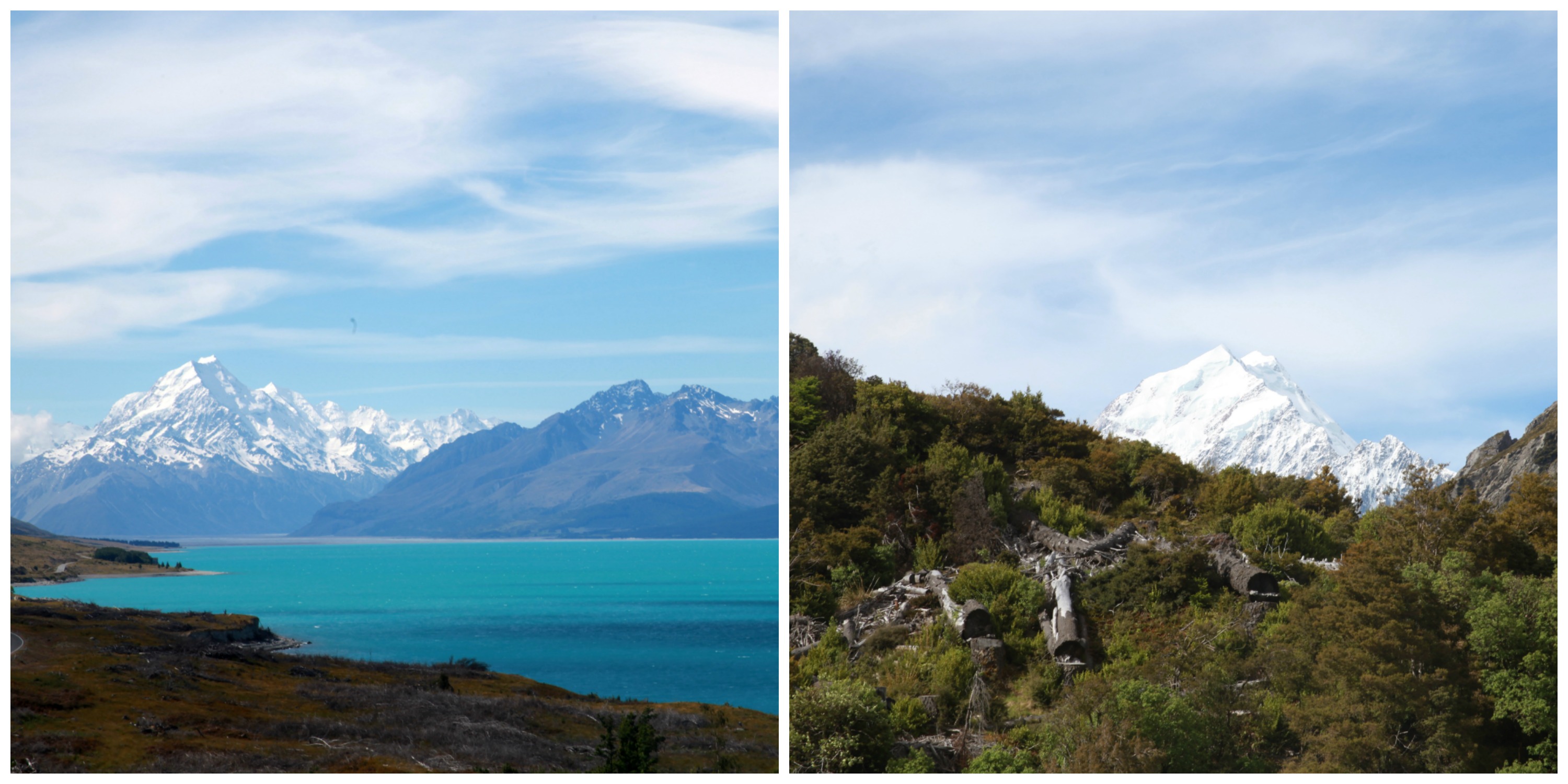 Even though we arrived to our hostel quite late (6:00 p.m.) we were still determined to hike the three hour Hooker Valley Track that evening. One great thing about the South Island in the summer is that the sun stays out quite late and we had about three more hours of daylight to work with. Just enough time for the Valley.

Hooker Valley Track is a fairly easy hike that winds its way to Hooker Lake which happens to be full of pieces of glacier. The only thing that made this hike a tad crazy was the winds. Gusts reached about 30-40 mph and it really felt like we were going to be blown off the path a few times. As we returned to the start, the last few rays of sunlight cast a pink hue on the peak which I was eager to capture on film. 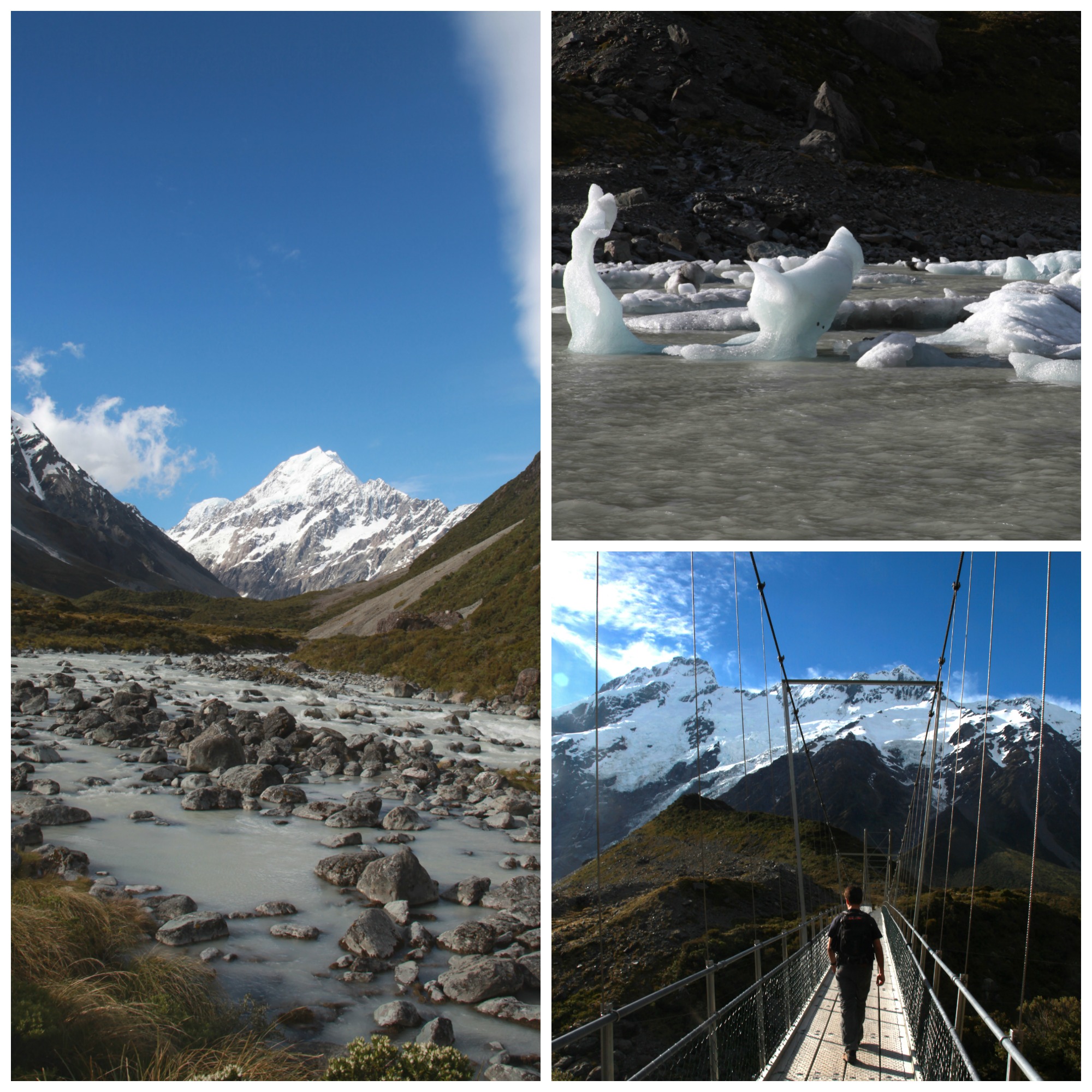 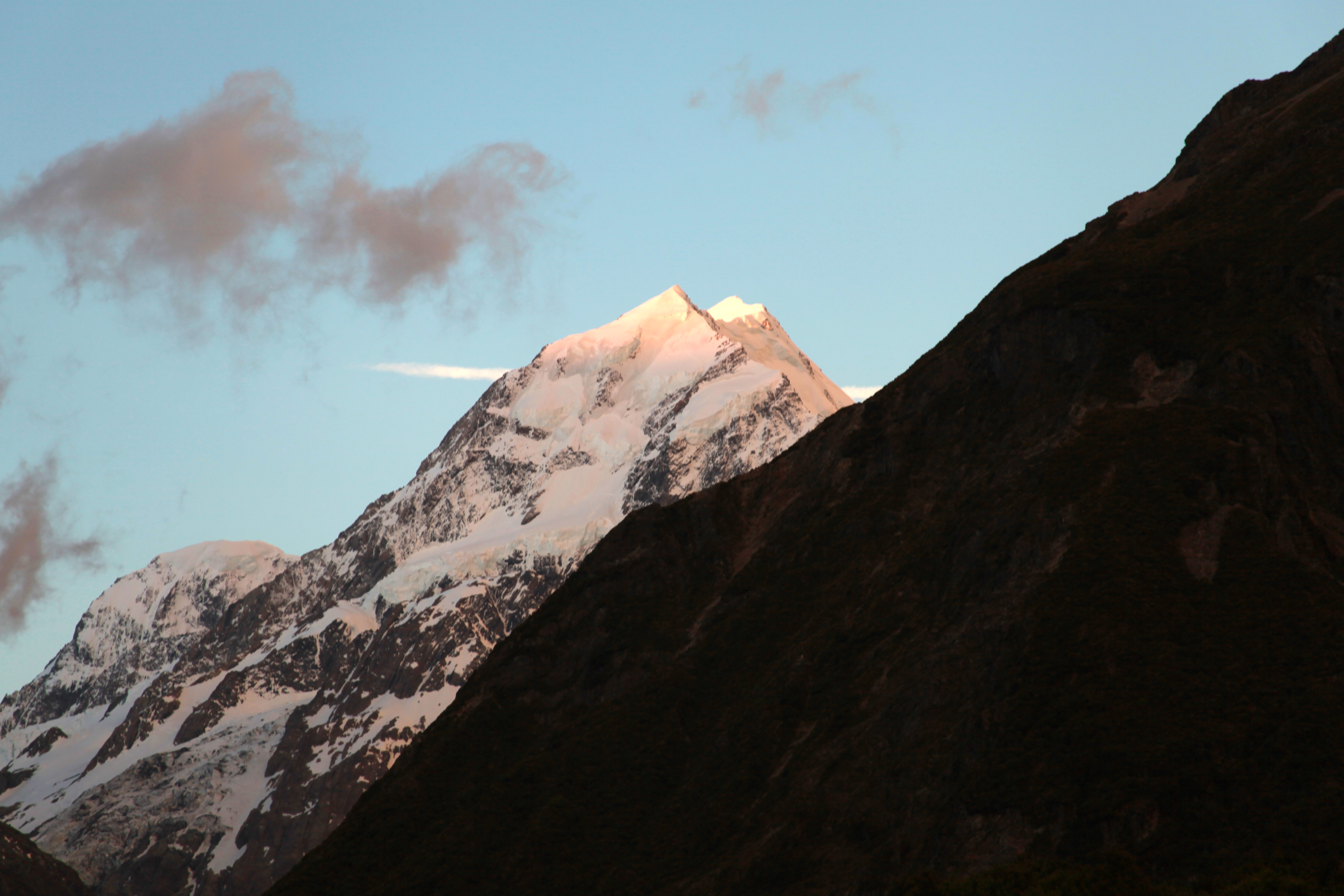 Unfortunately, the weather did not work in our favor the rest of our time in the Mount Cook Village. We were supposed to do a stargazing tour that night, but those strong winds had blown a band of high clouds into the area and our trip was cancelled. The tiny bit of sky we could see was beautiful, but the guide didn’t feel like the full tour was worth it.

The next day we were supposed to do the Muller Hut hike. It’s one of those tracks where you spend the day trekking up, stay overnight, then return the next day. We woke up that morning to rain and wind and a sense of foreboding. As we entered the visitor center to check in, we were greeted with this warning: 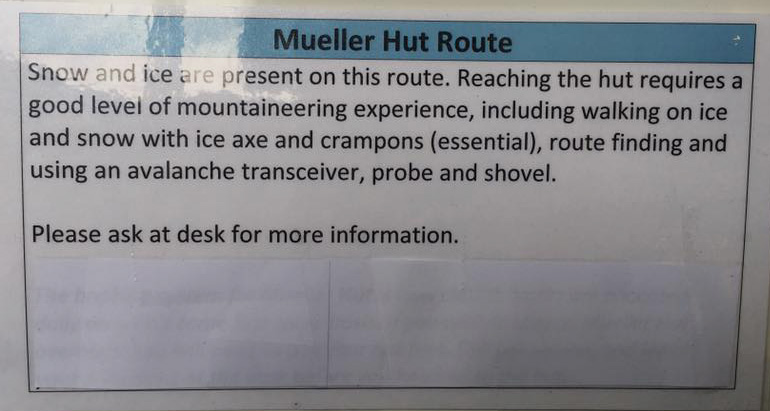 Choosing life, we cancelled our stay at Mueller Hut and set out for Lake Tekapo and Christchurch. This was the one issue with our jam-packed itinerary: no room to improvise.

Lake Tekapo is home to one of the largest dark sky reserves in the world. They have a university-run observatory on top of Mount John. We didn’t have time to tour the observatory, but we did drive up for the cafe. Here I ate the most amazing salmon bagel ever. My mouth is watering just thinking about it.

Lake Tekapo has a few unique sights. The first, of course, is the lake itself. Shockingly blue water that seems to stretch forever. On the bank, sits the tiny and old Church of the Good Shepard which features a huge picture window over the alter. I’m not sure how anyone can concentrate with that view. Surrounding the lake, thousands of purple lupine flowers bloom. These famous weeds are another defining feature of the stunningly beautiful Lake Tekapo area. 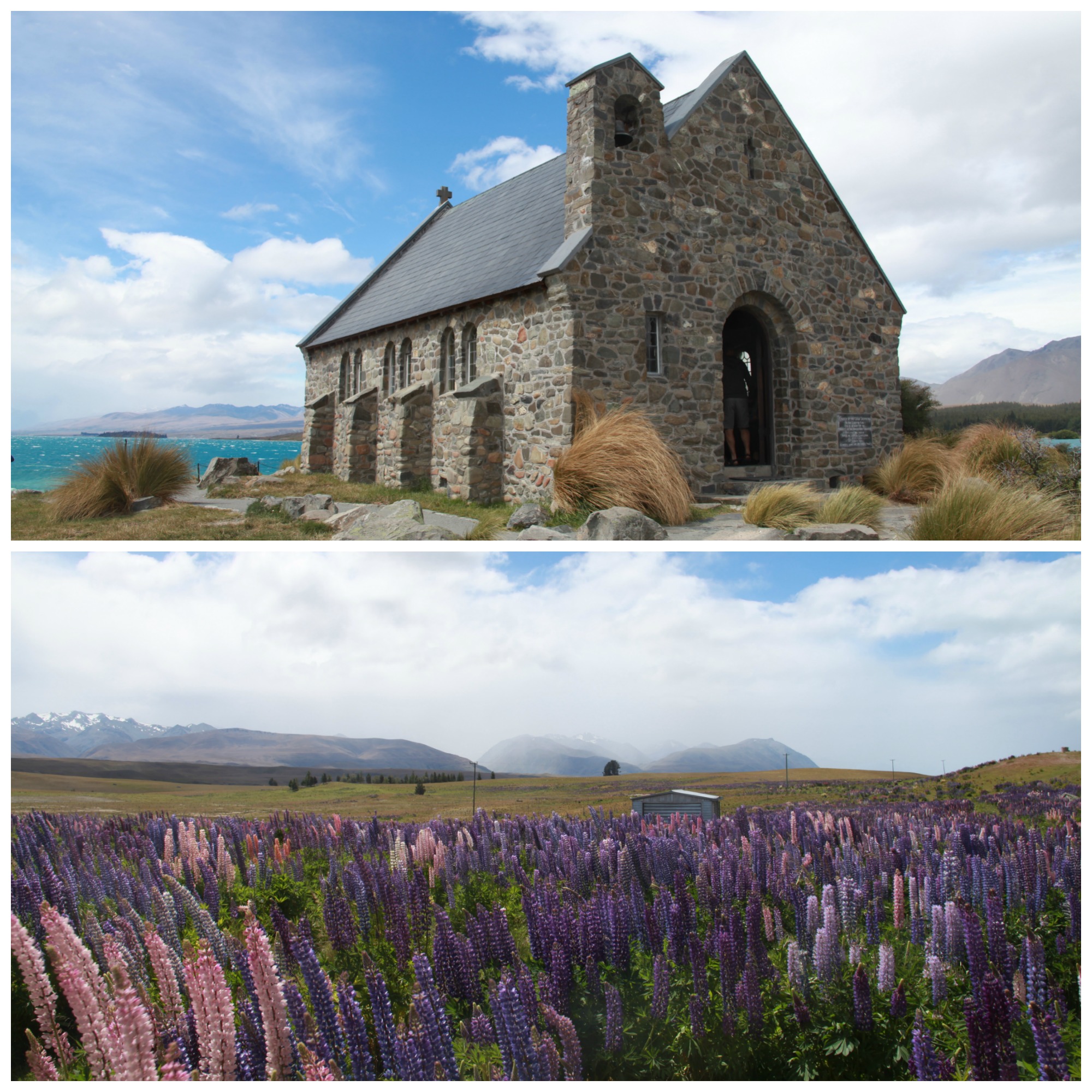 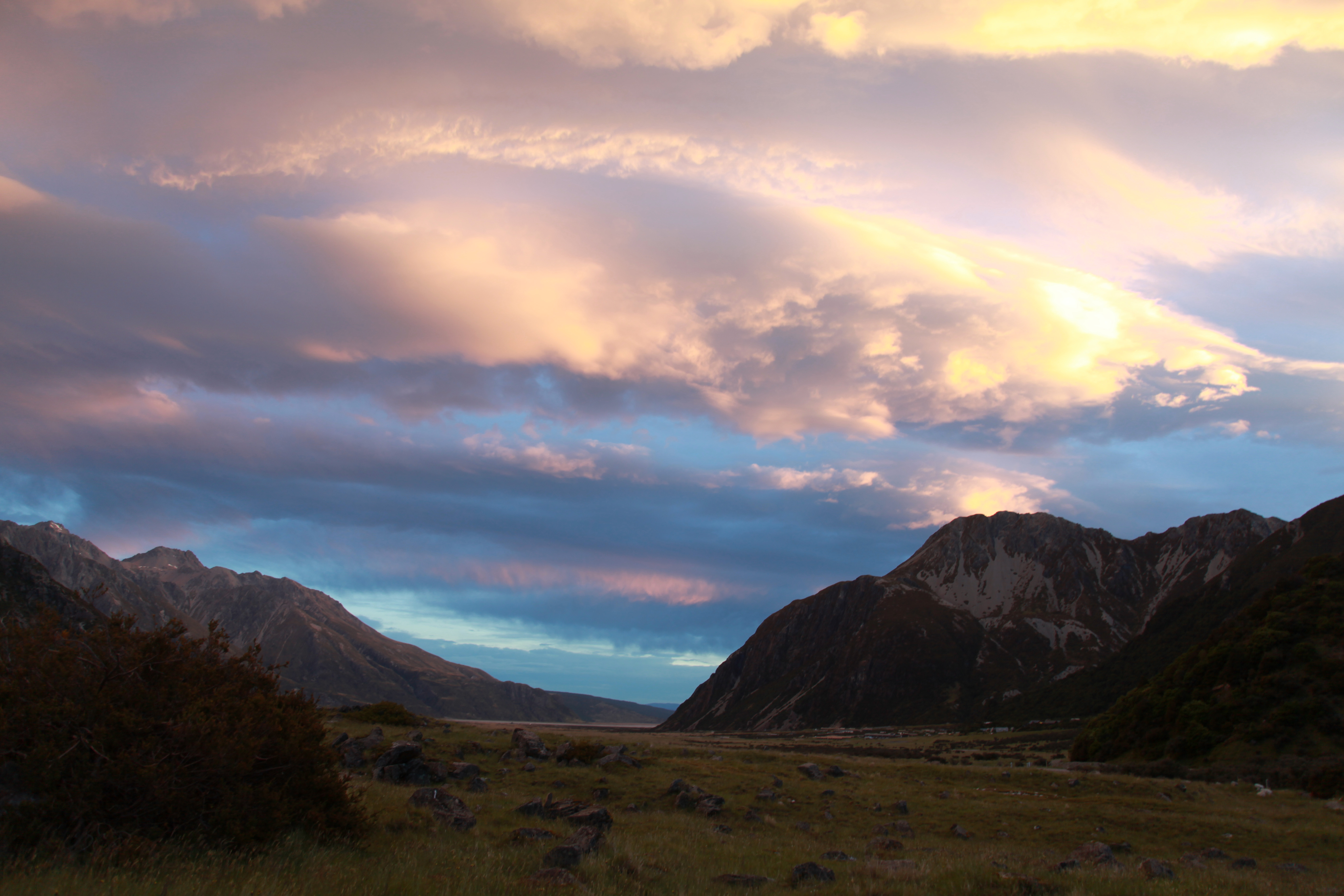