We have three crazy dogs. I love them to pieces but boy, do they drive me insane on a daily basis. I went from never having a dog before to suddenly having three in little over one year. I had no idea what I was doing, plus we kept acquiring new little puppies that as soon as a routine was established it got blow apart all over again. It was chaotic to say the least.

Fast forward to today. The girls are both three and Renny-roo is two. And all three of them have behavior issues to put it mildly.

Izzie is the best behaved of course. She had the most time with both of us working diligently to train her properly. She also had the luxury of beginning life in the U.S. so she was relatively healthy when she came to us. No scary wounds or a belly full of worms to deal with, just a bee sting and spay scar. Easy. We were also able to walk her safely around the neighborhood so she’s leash trained. The biggest issue with her is when the husky side of her personality takes over and she doesn’t feel like listening. That, and her princess act about going potty any time the grass is even a little damp.

Soya is my timid girl. She came to us a sick tiny puppy, and getting her healthy in Tajikistan with sub-par veterinary care was challenging. She’s never been without her sister since, and though they aren’t attached at the hip, Soya is definitely more comfortable with Izzie to keep her company. She didn’t get much leash training as a puppy because our neighborhood in Tajikistan wasn’t exactly safe for dogs. The one time we tried to walk Iz people growled at her, lunged at her, and kids threw sand into her eyes. Not exactly something we wanted to repeat.

Soya also suffers from my overprotective attitude towards her. She’s SO STINKING CUTE so when she’s scared or “unhappy” I want to comfort her. So of course this instilled a sense of “if I act scared mommy will pet me and pick me up and snuggle me, so I should do that all the time.” Super annoying now that every single noise she can’t immediately identify sets her into a barking frenzy.

And then there’s Ren. He’s my sweet boy, and my biggest challenge. He came to us extremely sick and extremely hurt. We honestly didn’t know if he could be saved, but luckily he was not so far gone that he was a hopeless case. Due to his early life trauma – and perhaps some of the treatment he got while in Tajikistan – he navigates the world in his own way. He’s never been easy to train. It took probably two months for him to understand sit, and even longer to understand that us petting him was a sign of affection, not an attack. In the six months between rescuing him and me finally admitting he was our dog, he bonded with us so strongly that now he’s the most cuddly, loving, 70 pound lapdog you’ve ever seen.

His loyalty comes at a price, however. He’s decided that anything that isn’t his sisters is a threat to mom and dad. Squirrels, birds, other dogs, people, anything he could see moving outside was clearly out to murder us. This behavior intensified in Maryland when he could see the street from our front windows, and whenever we tried to walk him. Trying to control a dog going berserk is difficult enough, but then make him 70 pounds and he just about pulls my arms out of my sockets. Not a great look walking around our neighborhood with this boy.

I’ve wanted to enlist the help of a trainer for a while now. I’ve tried everything I can think of and every technique I could find to control them, especially Ren, but I’ve had no luck on my own. But trainers are expensive in Maryland, and our schedules were always changing. It just never worked out.

Luckily, we are now living in a country that not only likes dogs, but has facilities in place like established veterinary care, doggy hotels, and, most importantly, trainers. Monday was our first try with a trainer, Denis, and it was an eye-opening experience for me.

For starters, Denis managed to subdue Ren in about 1.5 seconds. He also told me not to hold him back and let him run up to people to say hello. It would help him not to be aggressive. As Denis began correcting behaviors, I could also see that Ren WANTED to learn. It’s like he wanted Denis’ approval and tried so hard to do things right. I was so proud of my boy.

Soya, who usually loves people, decided she was terrified of Denis and barked her head off at him for approximately 30 minutes. Once he manged to get close enough to pet her, she was still very timid and afraid of everything when he tried to walk her around the neighborhood a little bit. This was probably the first walk where she wasn’t with her sister for support, but even so, it’s clear we need to socialize her on her own a lot more.

Izzie was, of course, a champion. Her biggest behavioral issue is that she doesn’t want to listen to other people. He’d call her over, and she’d refuse, but then if Sean and I told her to come, she’d prance over. What can I say? She’s a proud girl.

So now, we have homework. Since Sean works and I have mornings relatively free, I’ve taken it upon myself to be their primary teacher. Yesterday I took everyone out for their first walk around the neighborhood, and with a few tricks I picked up from watching Denis, it went relatively well. The girls were curious and a bit intimidated, but once we got through the first 10 minutes they fell into line relatively well. 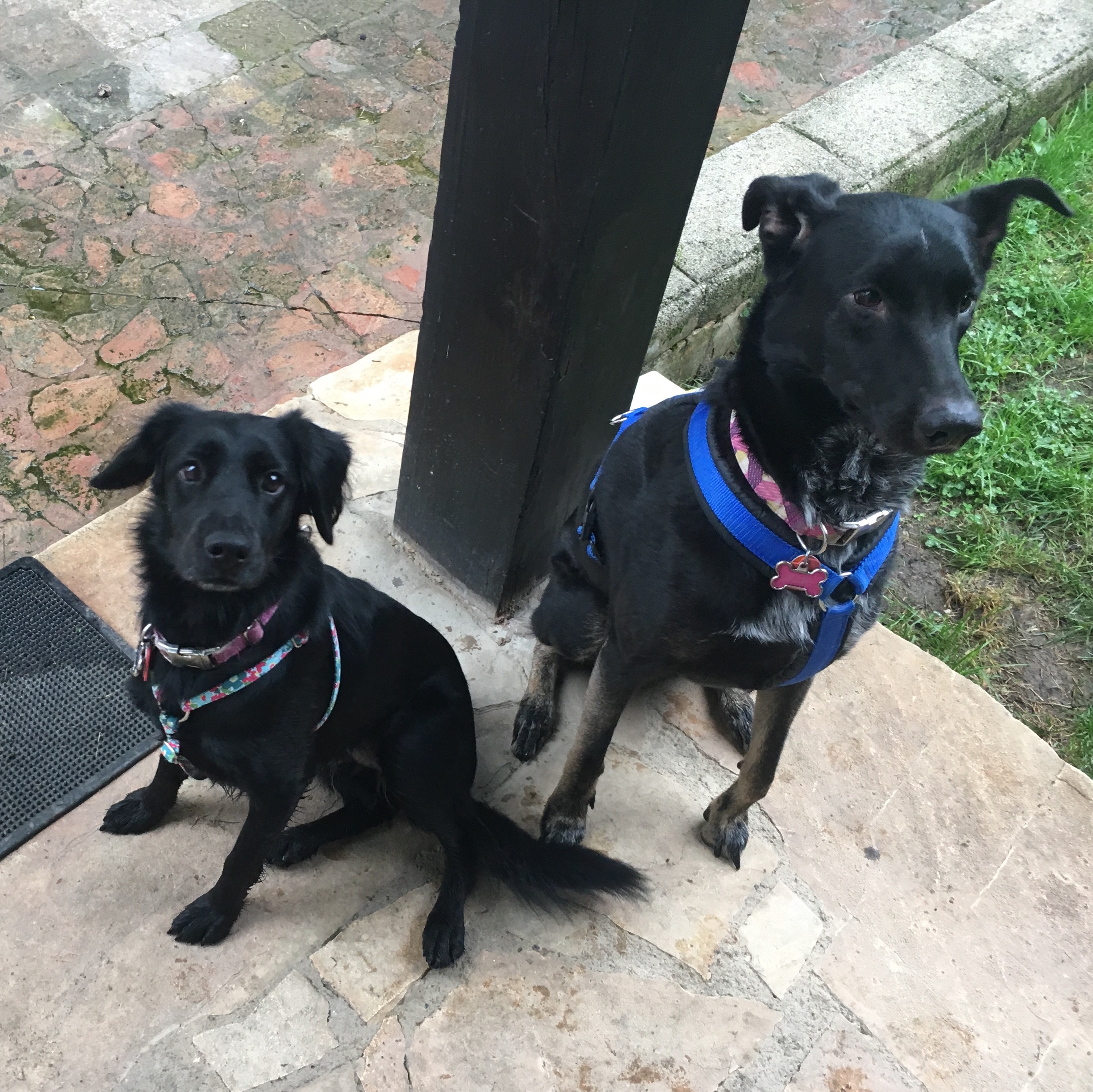 Renny was the most surprising. After watching him work so well with Denis on a few behaviors, I wanted to see how he would respond to me. And oh man, does this boy think he can take advantage of his mother. We’re trying to get him to sit and wait if we need to open the front door, and he fought me all the way. He wined, yawned, looked away, and it took such a long time to get him to actually LISTEN to me. Naughty little man. Once I was satisfied with his work in the courtyard, we ventured out for a walk. I held my breath.

HE DID SO GOOD! He walked straight, head up, and right at my side. I didn’t even have to keep the leash taught for most of the walk. We encountered a bunch of people and he ignored everyone. The only minor issue was a momentary encounter with a loose dog (I don’t think he was a stray, just outside his house wall). In the States that probably would have resulted in a huge scene, but after a single bark and growl, he went right back to happily walking alongside me. I’m so proud of him.

I know it’s going to take a lot more painstaking work with these dogs, but I finally feel empowered enough to effectively train them. It’s also reassuring to have dog people meet these three nutcases and hear things like “they’re maybe a little spoiled, but they’re fine,” or “they’re just dogs being dogs!”

Perhaps their mom didn’t screw them up to badly after all. 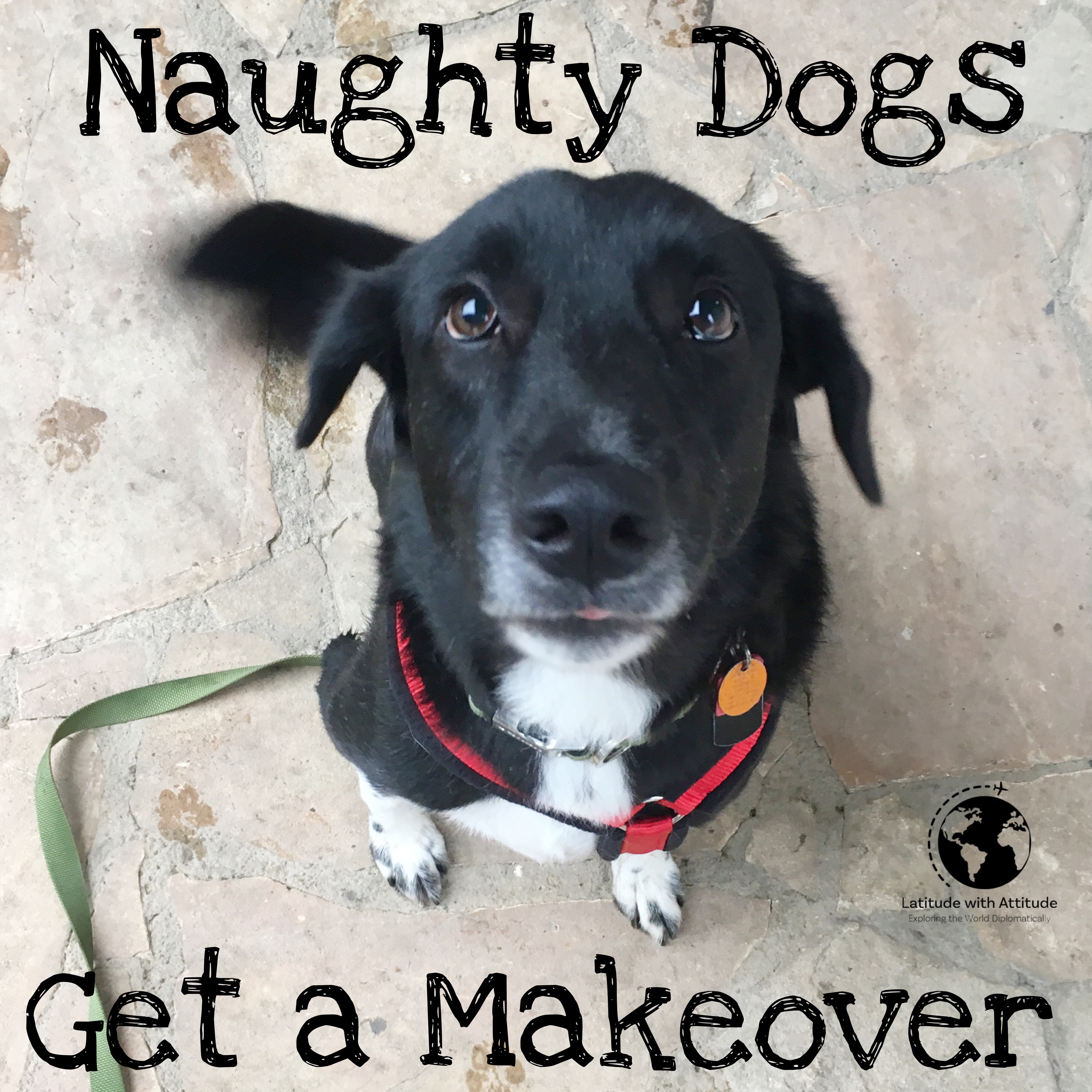 One thought on “Naughty Dogs Get a Makeover”