I’ve said it before a few times on this blog, I’m not a very strong skier. I learned late, I’m uncoordinated, and I simply don’t get enough time on the slopes to ever get comfortable. My last skiing experience was Shymbulak in Almaty, Kazakhstan, and I absolutely hated every minute of it. I spent more time with my face in the snow than anything else, and the whole experience left a sour taste in my mouth.

Trouble is, I’m married to a person who’s been skiing since age two. And now, we live in a country with several excellent ski destinations within a few hours drive from our house. I knew there was no escaping the inevitable: sooner or later I would have to put on my big girl snow pants (and too-small ski boots) and try again.

Oddly, I’ve been the one bugging Sean about skiing since December, but we kept getting sidetracked. On Christmas Eve, we had two extra puppies in the house. I was in Geneva for the ski meet up in January. And after long hours at the office, Sean will always choose a relaxing day at home over an early morning wake-up followed by a two-hour drive on unknown roads in a foreign country. It seems to have become a pattern over the years: by President’s Day weekend we suddenly realize “holy crap it’s already mid-February and we need to just effing go skiing already!” 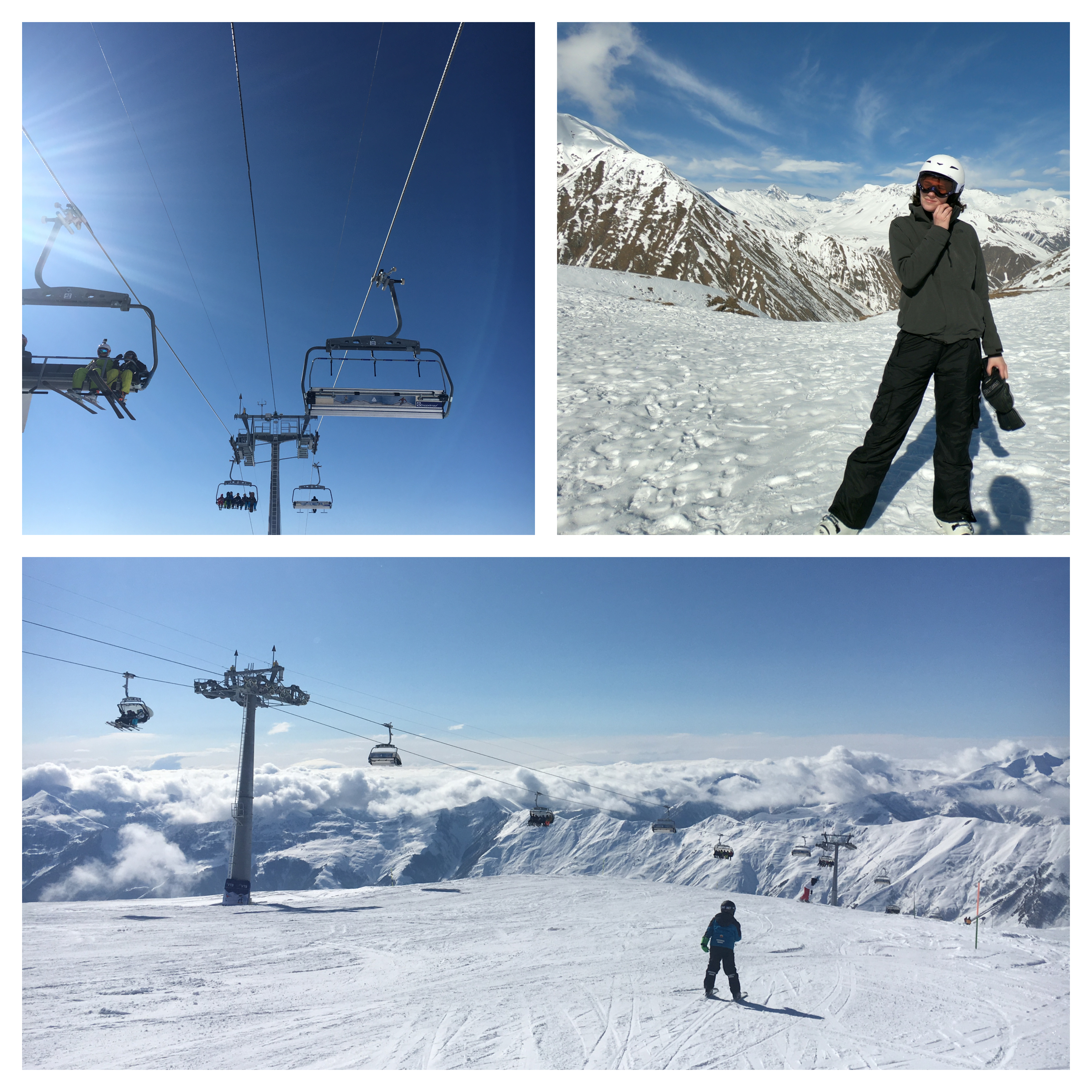 Georgia may not be the first place you think of when you consider a ski destination, but upon closer inspection, it definitely makes a case for itself. The Caucasus Mountains stretch between the Black Sea and the Caspian Sea and define Georgia’s northern border with Russia. There are four main ski resorts in Georgia: Gudauri, where we went last weekend, Mestia, Goderdzi, and Bakuriani. All of them have multiple lifts/gondolas, groomed runs, and even a bit of backcountry.

Gudauri is the most developed ski town offering a wide array of terrains for just about any skill level. Eleven lifts and 18 runs criss-cross up and down the mountain making for interesting skiing. Aside from the groomed runs, there are virtually no trees, so more experienced skiers, like Sean, can pick their way down the mountain in a more challenging way. I always enjoy a “choose your own adventure” type of ski environment. I’m able to stay on easier terrain, he can go off and do his own thing, and we are able to meet up at the bottom. This also comes in handy as the runs become more crowded as the day goes on.

After such a disastrous last showing in Almaty, I was a bit nervous and anxious to get my feet under me to try again. We happened to find parking halfway between two ticket windows, so we chose to ski down to the lower one. This allowed me to get a few turns in and get some jitters out before heading up the mountain. After purchasing tickets, we quickly took two chairs up to the second-tallest peak to begin our day. From here, I’m not sure what came over me. Perhaps I’m in better shape. Perhaps it was the absolutely perfect day we were gifted. Perhaps I just refused to fail. Whatever it may be, a feeling of overwhelming joy overtook me, and when I caught up to Sean I was positively beaming. I screamed something to the effect of:

I’m not sure what was funnier, his amusement or the shocked looks I got from several Russians as I sped by. 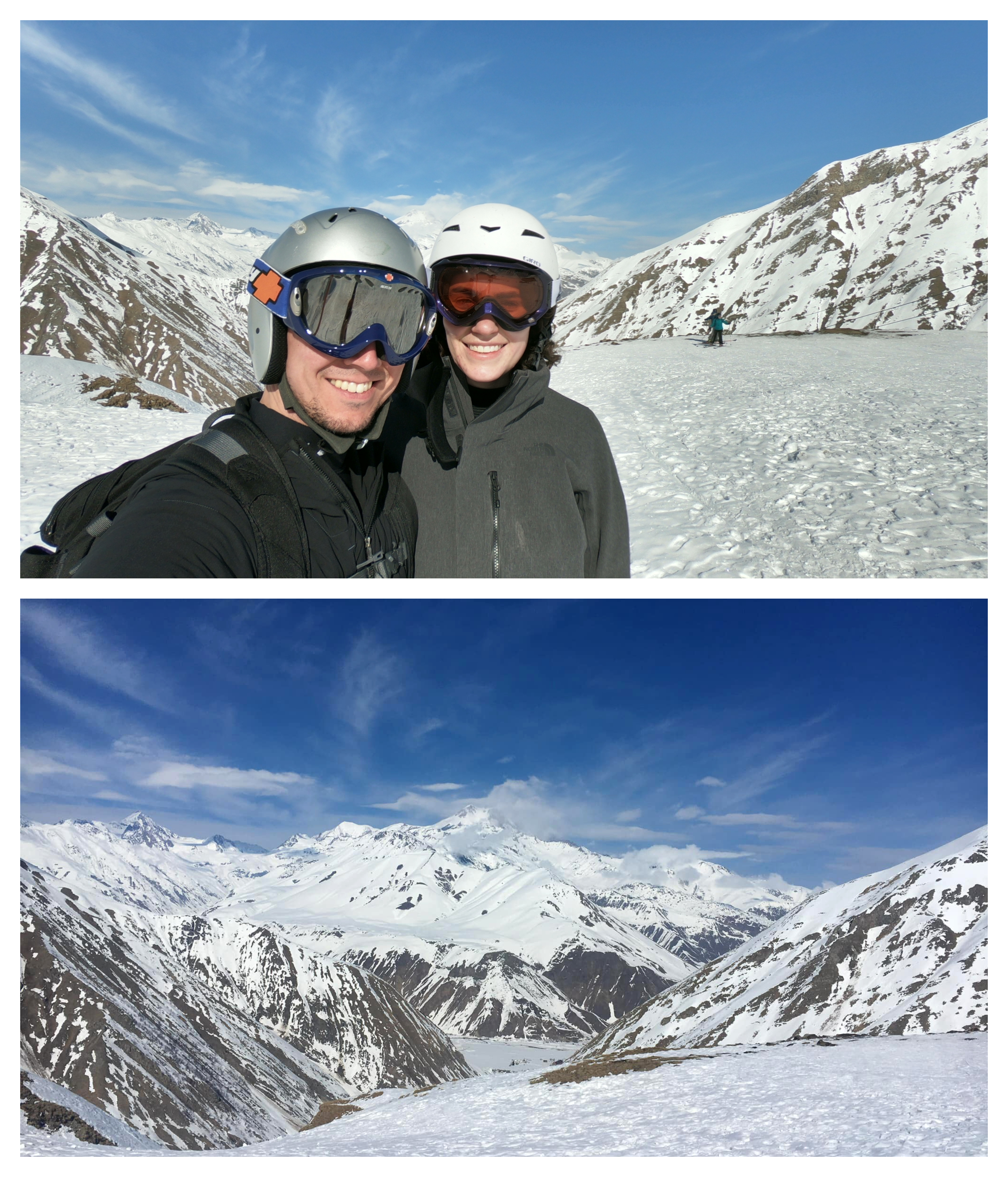 Gudauri is also great for anyone learning to ski. There is an entirely English-speaking ski school, and we saw countless instructors leading groups of all ages all over the mountain. There’s also a plethora of activities for those less inclined to slide down the mountain with boards strapped to their feet. Paragliding, sledding, snowmobiling, and simply relaxing at a cafe or sauna are all available options to pass the time.

For accommodations, there are countless ski-in/ski-out hotels and apartments for rent. We stayed in a cozy apartment literally steps from the lifts. There are also several ski service shops in town for waxing, sharpening, and other repairs. In the evening, several bars and restaurants stay open well into the night. We were exhausted after a long day, so crashed out fairly earlier after a dinner of two full pizzas and some delicious Saperavi.

Unfortunately, that night, the weather took a turn. We woke up Sunday morning to steady winds with gusts easily reaching 20-25 miles per hour (which have not died down since). We waited a few hours to see if conditions would improve, but after an accident last year, I assumed officials would be overly cautious. We had also purchased a three-day pass that is valid until March 10, so I didn’t want to waste a day if we ran the risk of it getting cut short. In the end, we decided to come home and save the passes for some other weekend.

Besides, this way we are forced to go skiing again. 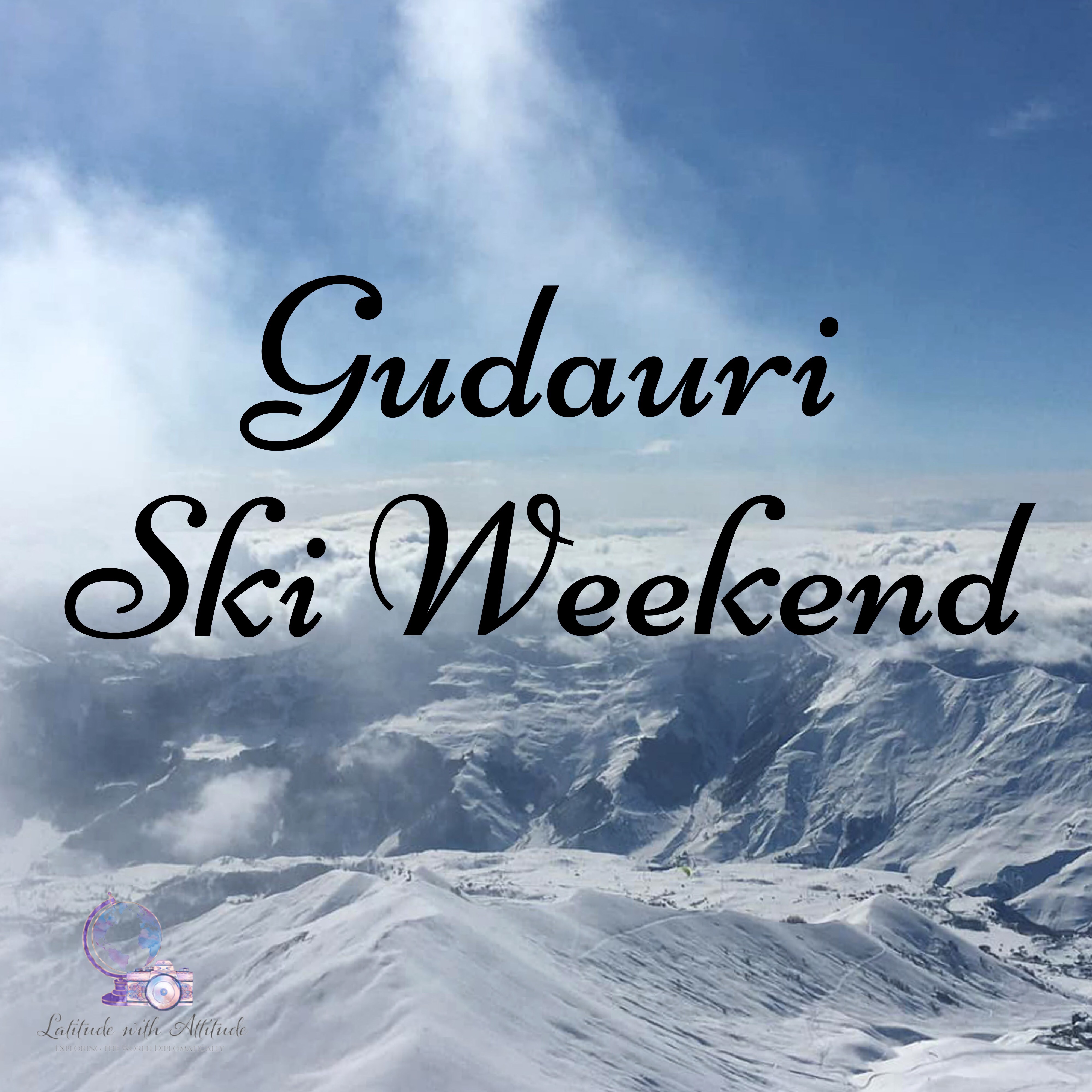