In the early 1900s, the ironclad Russian Empire was beginning to crack. Tsar Nicholas II was in power and was an unpopular and ineffective ruler, who was eventually overthrown during the Russian Revolution in 1917. Meanwhile, the Industrial Revolution began to show significant influence in Russia, but the country remained rural and poor, and those in power disagreed on how to advance the empire into the 20th century.

In 1903, the Russian Social Democratic Labour Party party split into two wings: the gradualist Mensheviks and the more radical Bolsheviks. The Mensheviks advocated for socialism and believed the working class was insufficiently developed. The Bolsheviks, under Vladimir Lenin, supported the idea of forming a small elite group of professional revolutionists to seize power by force. With so much uncertainty at the top, it’s no surprise the stage was set perfectly for propaganda and fear mongering. Enter Iosif Djugashvili, who the world knows as Joseph Stalin. 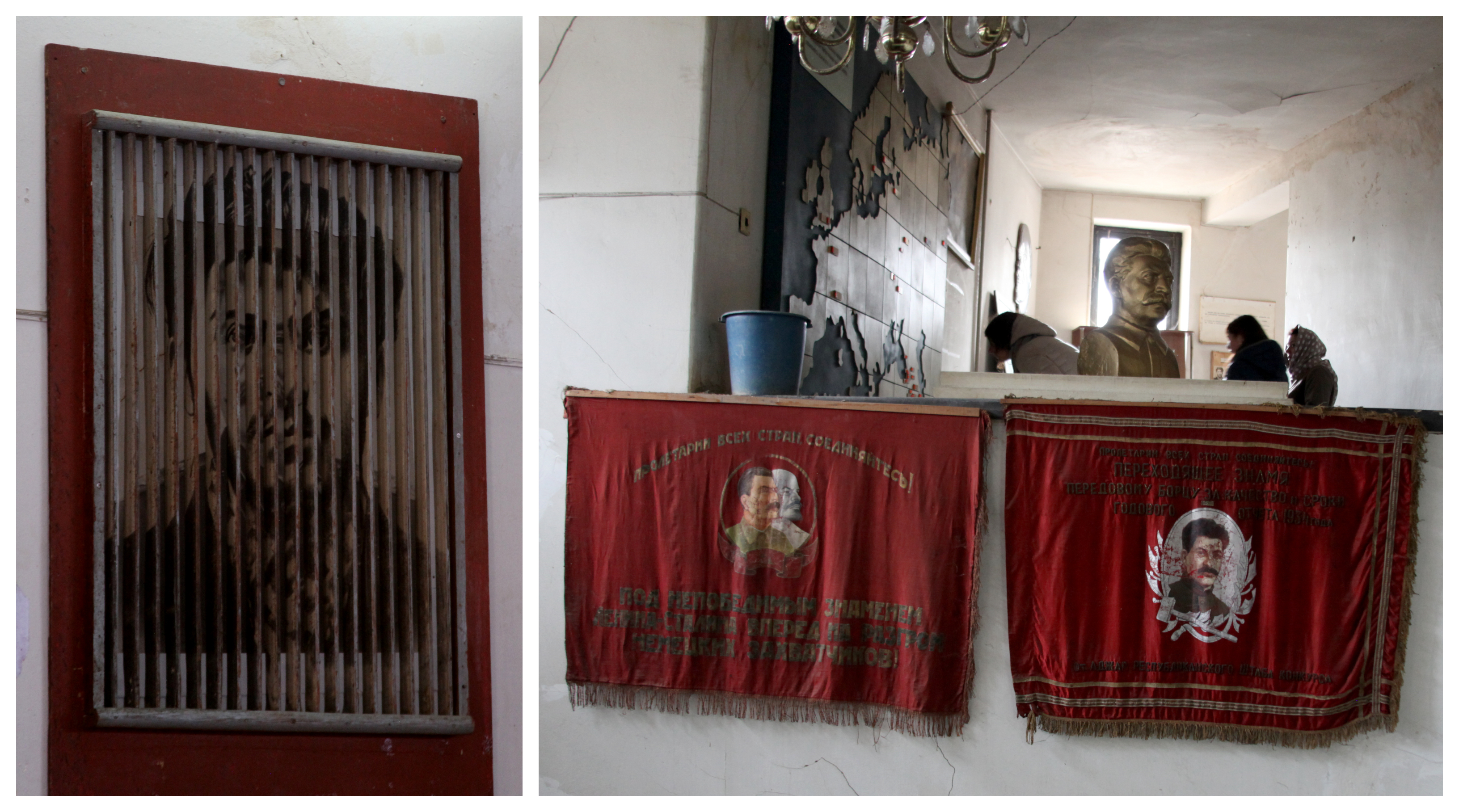 It began in 1904. Fifteen meters below ground, concealed by a nondescript house, an old printing press was smuggled into Georgia piece by piece. Once assembled, Stalin, then a young man, began printing and distributing papers in Georgian, Russian, and Armenian calling for the removal of the Tsar. He did not operate alone. A network of Bolshevik supporters aided in printing, secret-keeping, and distributing these materials all over Georgia and the surrounding countries. A finished stack of papers would be delivered secretly to a pre-determined stall in a market, then, later, another person would retrieve them for distribution. They used the trains to ensure their messages were spread as wide as possible. 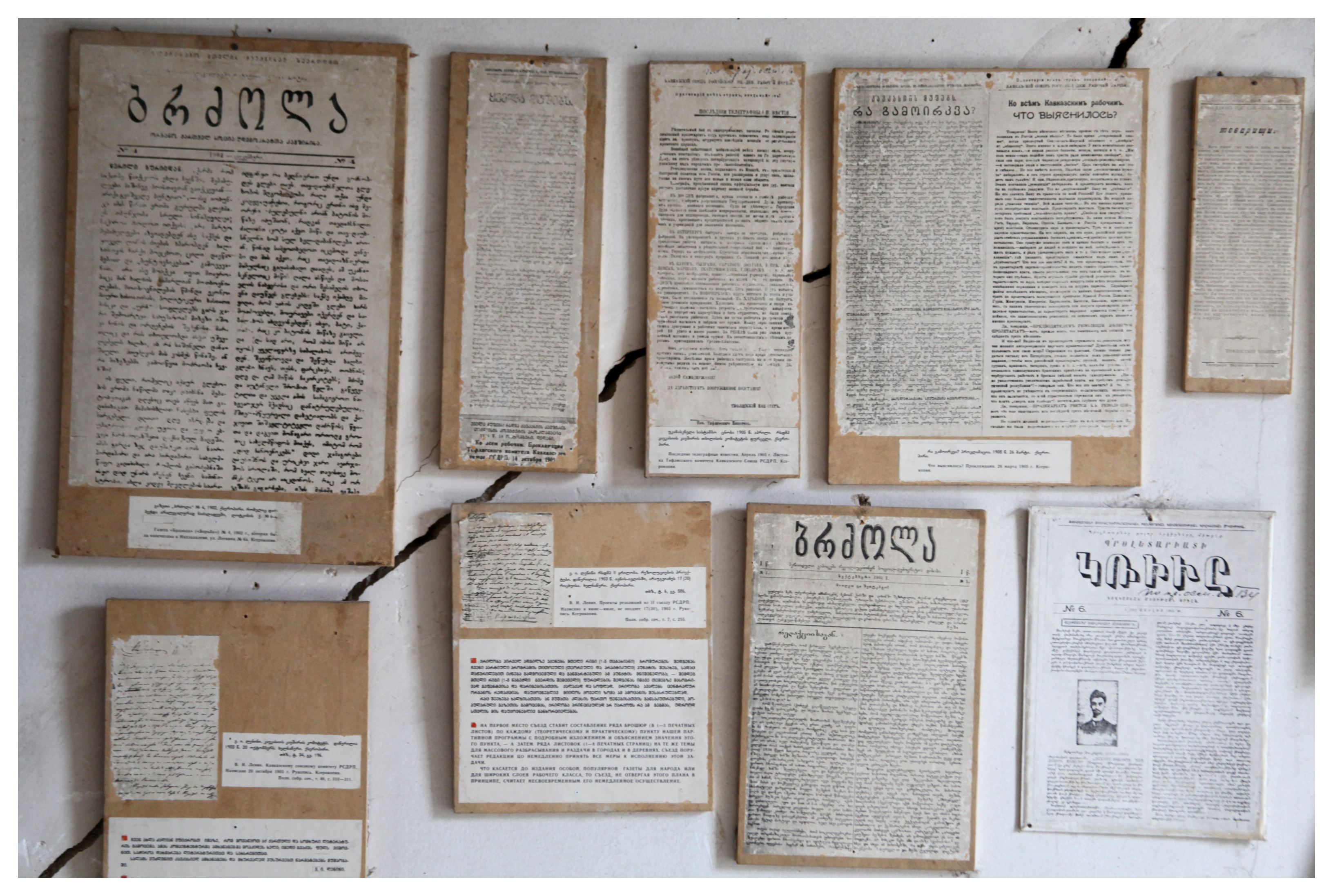 For three years this press cranked out communist propaganda until it was discovered and destroyed in 1906. When Stalin consolidated power into the USSR, the printing press was recovered and restored into a museum. During the Soviet Union, the museum was a popular attraction, well-maintained with a movie theatre to screen Soviet films. In 1991 when the Soviet Union dissolved, the museum was mostly abandoned.

Today, the museum is run by the Communist Party of Georgia. A highly unpopular and repressed group, the party’s main goal is the restoration of the socialist system. They receive no funding from the Georgian government, and displaying their flag in public is illegal.

The museum itself is in complete disrepair. Large cracks run through the walls and ceilings. Years-old water damage stains the floor. Broken stairs and uneven surfaces everywhere. Anything metal is completely caked in rust. There was no heat in the building and very minimal lighting aside from sunlight. 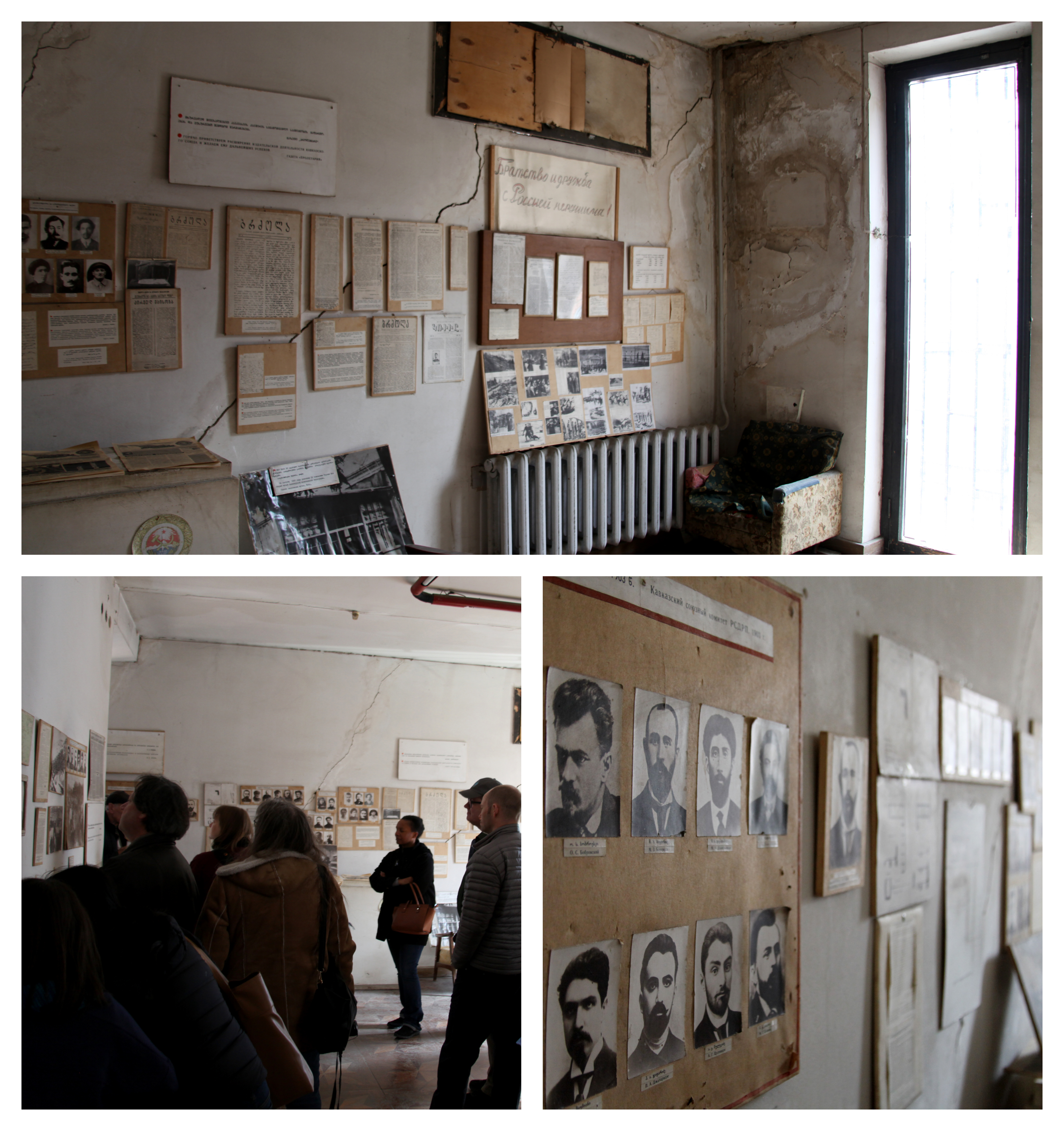 Our tour was lead by the current party leader, Zhiuli Sikhmashvili, a lively 79-year-old man who has been committed to communism for nearly 50 years. He opened our visit by proudly declaring NATO and the United States as “aggressors on the world stage” and showcased a photo of himself stopping on the NATO flag in Batumi. From the entryway, we moved upstairs to the museum which displays photographs of workers, reproductions of papers once printed here, the illegal communist party flag, and a few letters and paintings. We were then shown to a reconstruction of the house which stood directly above the labyrinth of underground tunnels where the printing took place. Some of these tunnels were meant to be escape routes in anticipation of Russian raids. We saw the original entrance, and the shaft used to hoist papers to the surface once they were completed.

We then descended the rickety, decaying stairs to a dimly-lit, sub-terranean room housing the original printing press. To me, this part of the tour was worth the guide shouting at us about communism for 20 minutes in the beginning. This creepy tunnel with a singular bulb illuminating the entire room seemed to maintain the secretive essence of the operation once housed here. 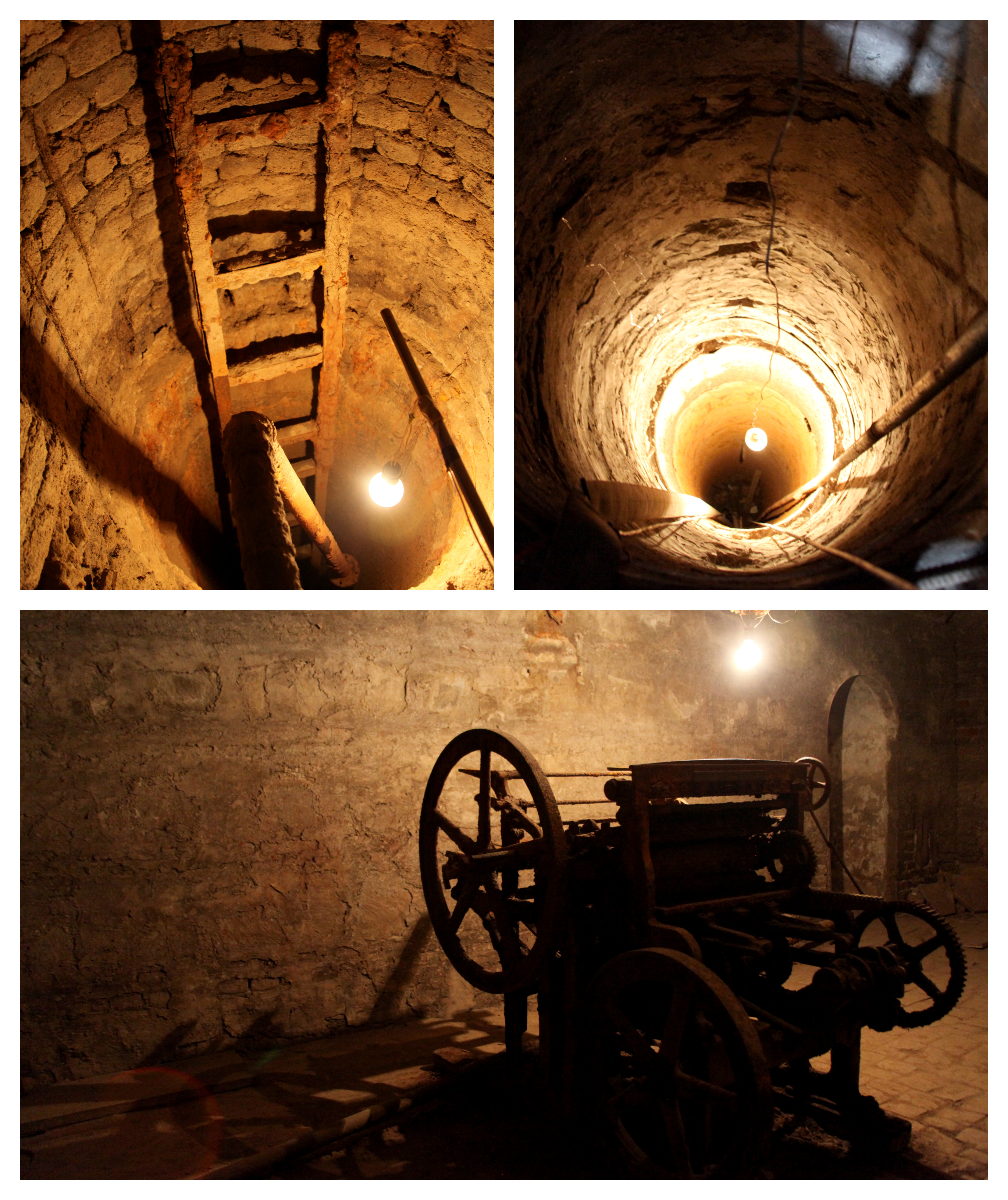 No matter your political viewpoints, I think Stalin’s Printing Press Museum is worth a visit. While our guide’s stance on major issues was at times uncomfortable, it was fascinating to get a small glimpse history from the other side. 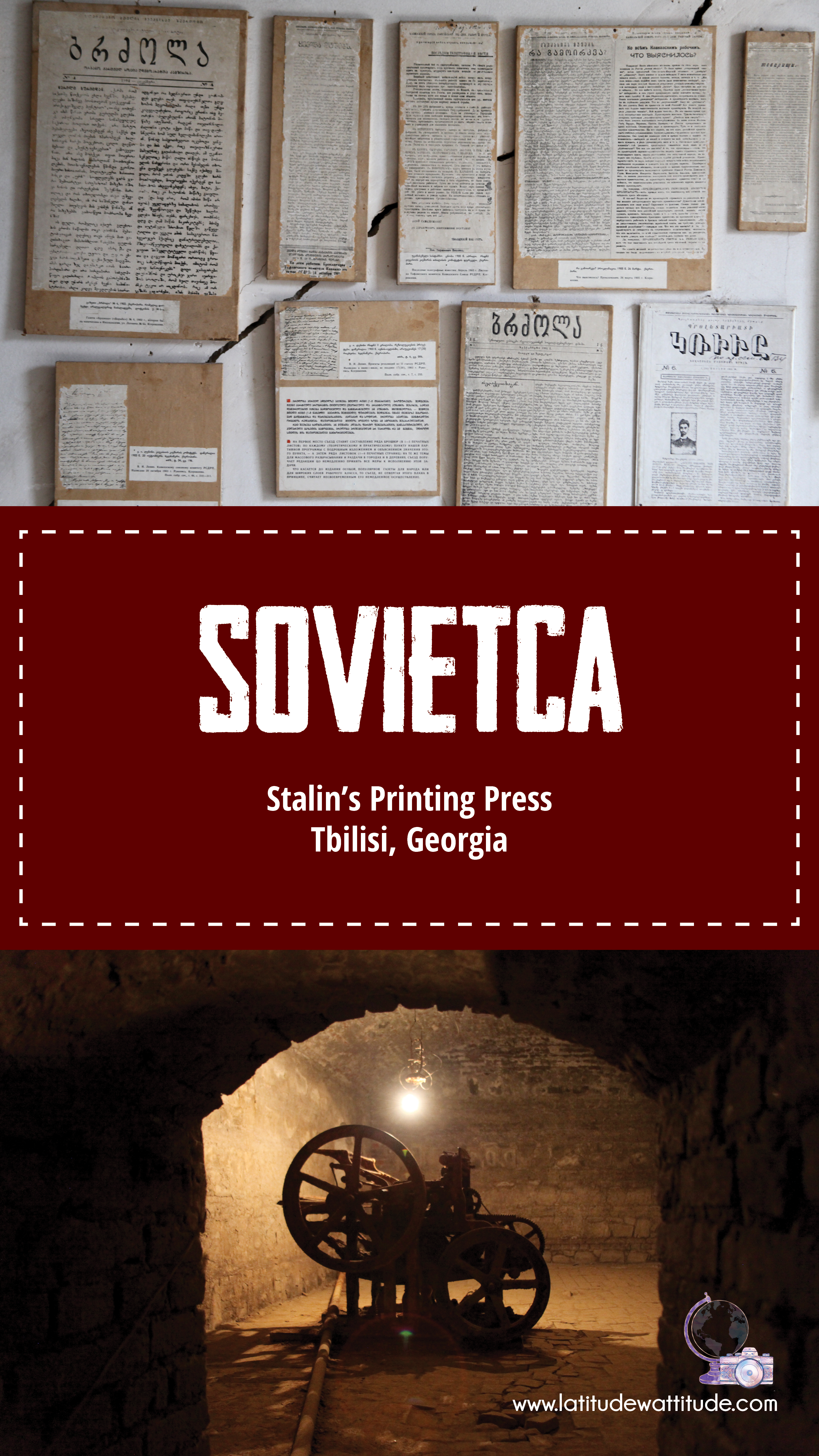