Baku is only a short and smooth 55-minute plane ride from Tbilisi. I did only the tiniest bit of research before this trip since we were going to be at the track for most of our time, and I figured since Azerbaijan is Georgia’s neighbor, they would be at least relatively similar.

I was so wrong. 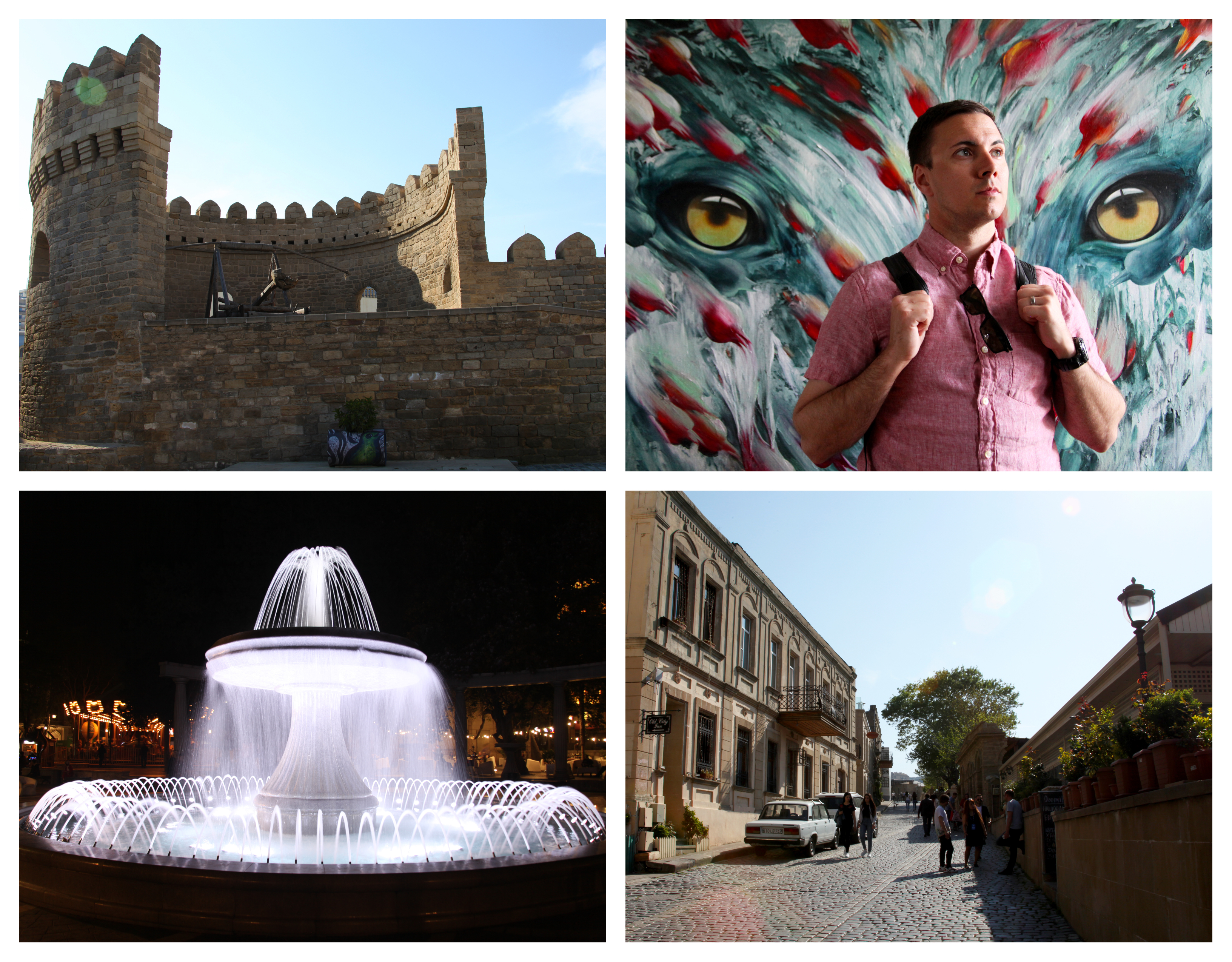 In Azerbaijani, there is a phrase Odlar Yurdu which eloquently translates to Land of Fire. This phrase refers to both the geographical features of the country as well as the culture regarding the metaphysical realm of mortals. In terms of geography, throughout the countryside, the phenomena of burning hillsides can be observed as gas seeps through fissures in the earth. In the spiritual sense, “Azer” translates to “fire,” and the people of Azerbaijan are historically worshipers of fire. Additionally, the region has been home to Zoroastrian fire temples since the Persian Empire.

Today this influence of fire is alive and well in Baku. Dominating the skyline are the impressive Flame Towers, a trio of skyscrapers paying tribute to the Ahura Mazda god in Zoroastrianism. At night these three towers treat the city to a brilliant light show with thousands of multi-colored bulbs on timers to create beautiful illusions. We never managed to see these lit up close – one night we tried to wait for them to turn on, but it got cold, and I got hangry – but from afar they are still stunning. 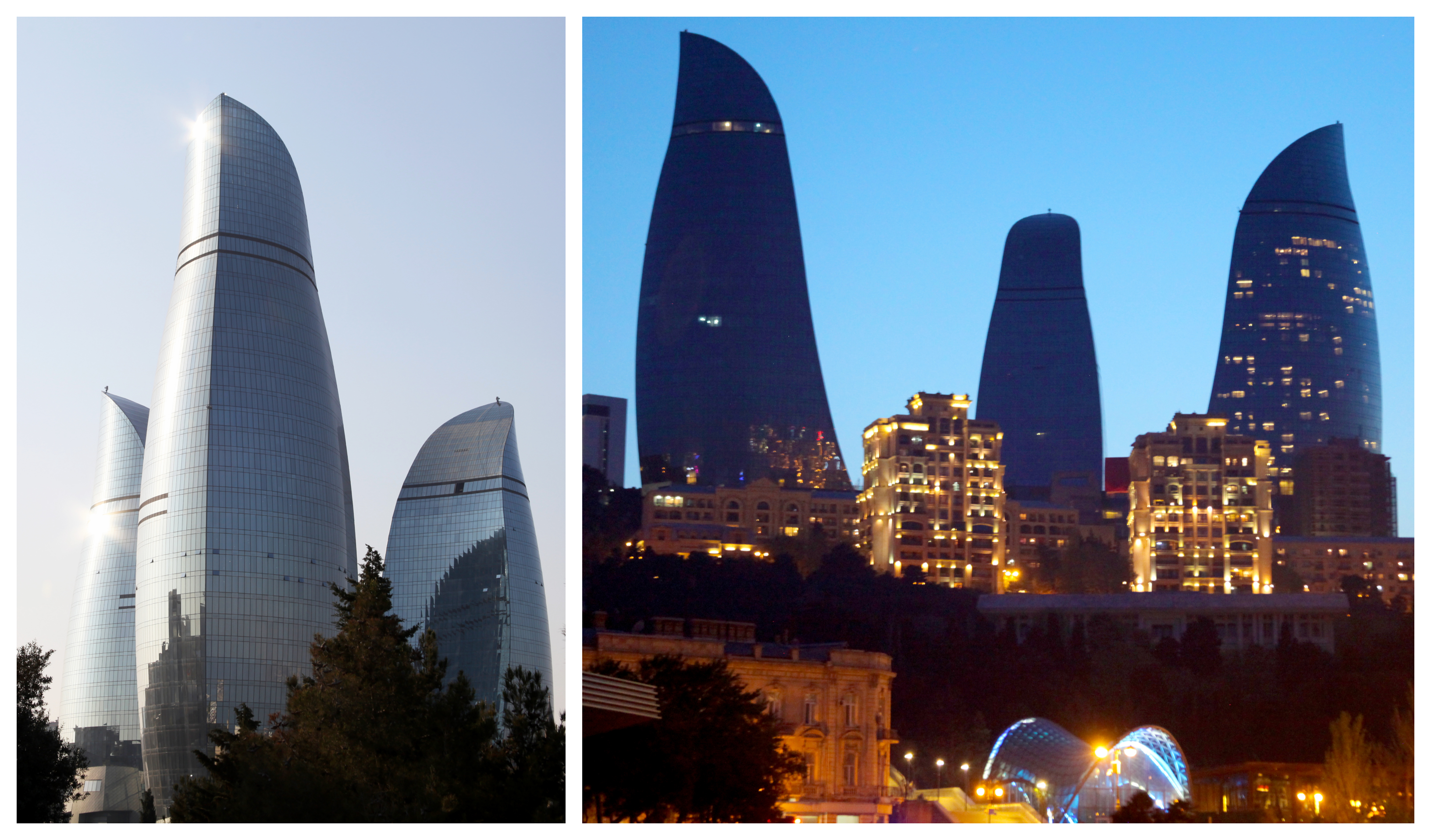 Though they are neighbors, Tbilisi and Baku are very different. Baku is very beautiful and has more modern flair than Tbilisi. Many of the buildings in the downtown area are glass and made specifically to reflect the sun, further adding to the Land of Fire concept. Baku at sunset is simply stunning and seems to glow from within. At least when we visited, the air seemed to hold more dust than in Tbilisi, which contributed to a strange sense of closeness. Sean at one point remarked how he couldn’t distinguish the sky from the sea with how thick the air seemed. It was eerie but in a good way. 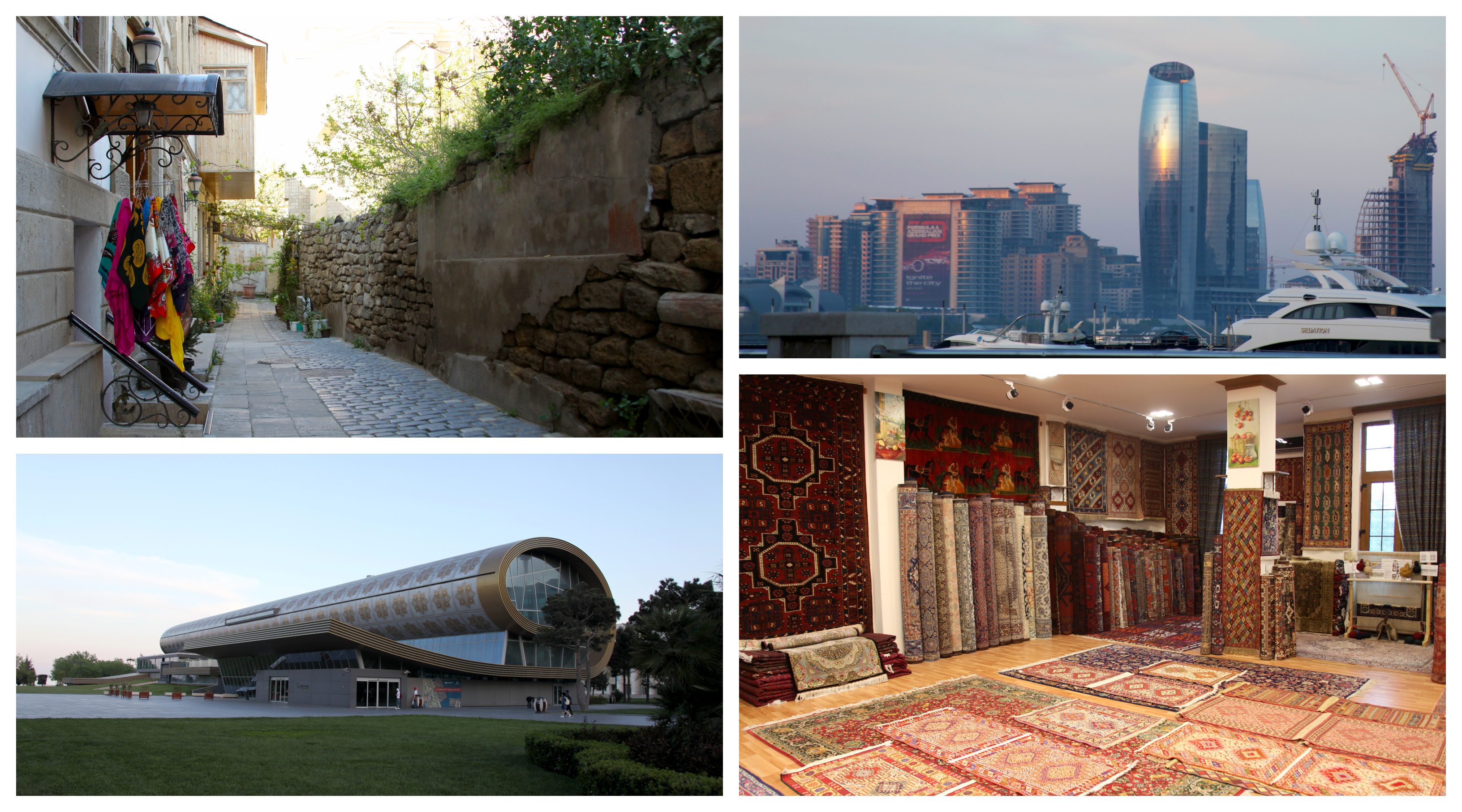 We spent the majority of our days exploring Baku in the Old City, the historical core of Azerbaijan. Here you’ll find cobblestone streets, charming historic buildings, unique restaurants, and excellent souvenir shopping. Of course, we stumbled into a carpet shop and purchased a small Sumakh which Nona has claimed as her own. We visited the Palace of the Shirvanshahs and Maiden’s Tower, two of the must-see historical sites in Baku. We also spent a morning at the Carpet Museum which details the many unique styles of Caucasian weaving with hundreds of examples reaching back to the  17th century. The building is even shaped like a gigantic rolled-up carpet. It was definitely a highlight for both of us.

It’s no secret if you’ve followed this blog for even a second that Sean and I like to eat, and Baku’s restaurant scene did not disappoint. The Turkish and Arabic influences were very apparent in their cuisine, and we enjoyed sampling both traditional food as well as modern fusions. We even ordered plov – something I have not eaten since Dushanbe, for many reasons – and enjoyed it immensely. 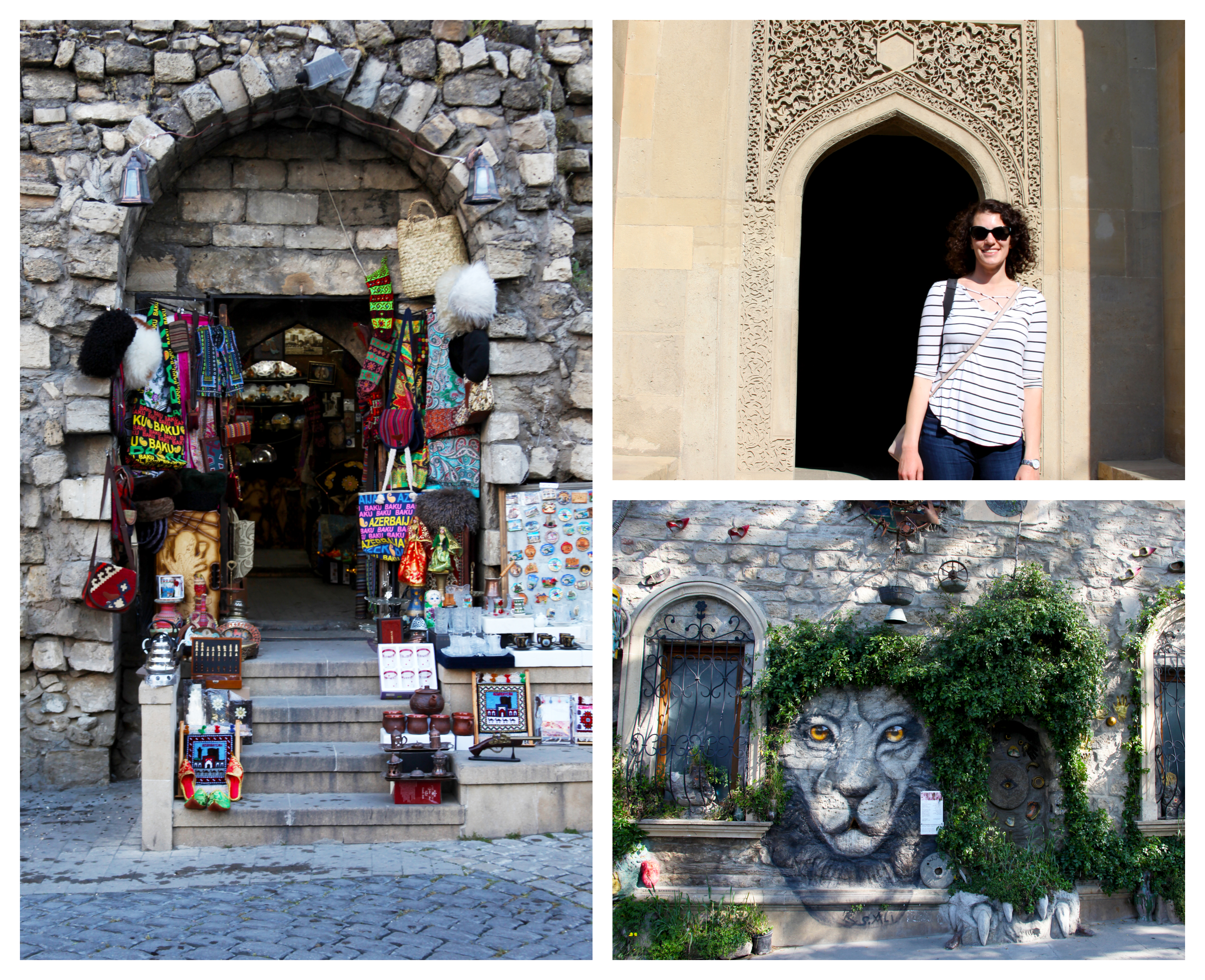 I’m sure we will return to Baku or at least Azerbaijan before we leave Tbilisi. We didn’t manage to make it outside the city this trip, and I’m so curious to see the fire fields and boiling mud and other weird geographical features that Azerbaijan has to offer. 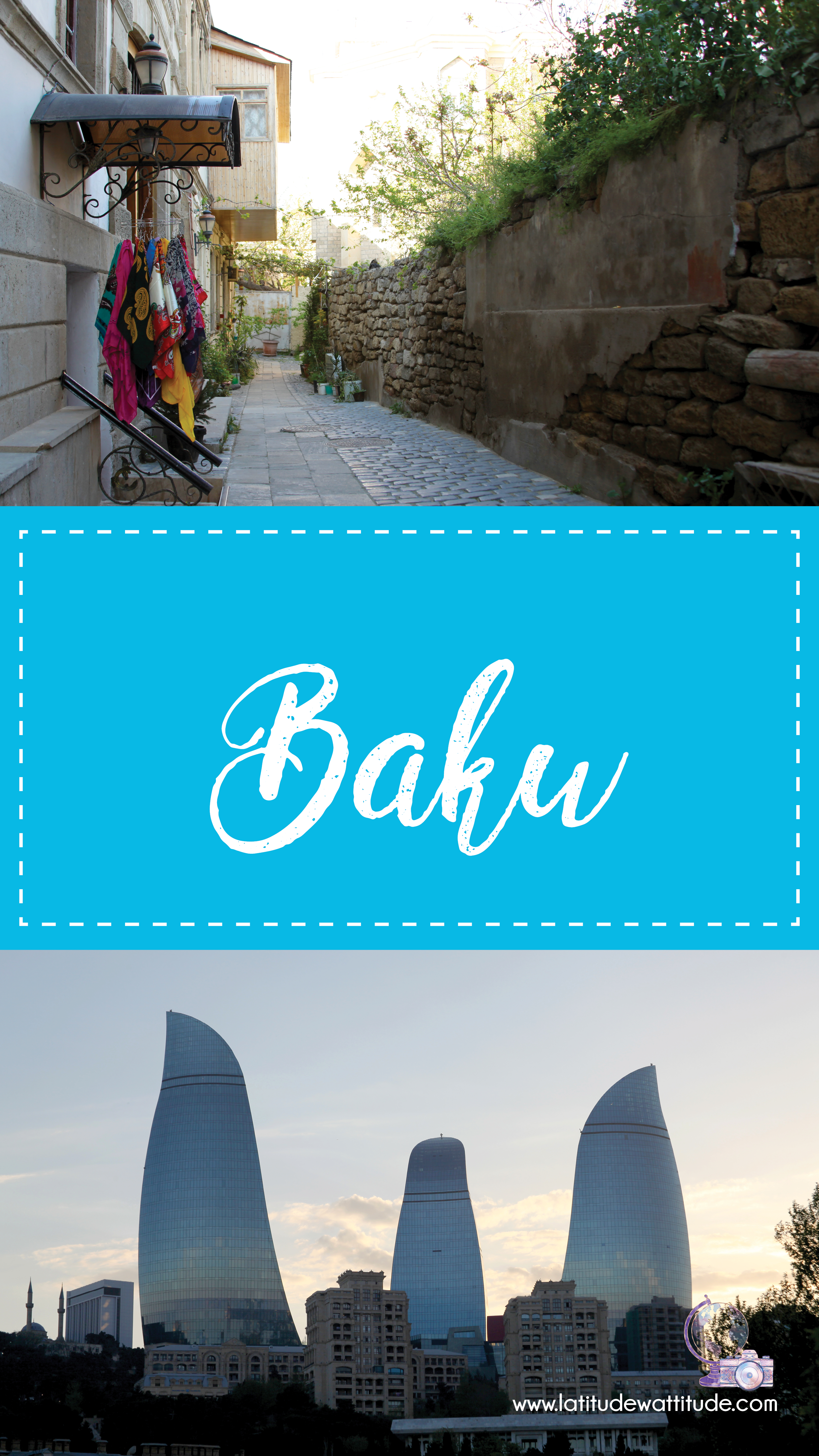