Georgian food is quite unique. Some things feel very familiar – like dumplings or cucumber salad or kebabs – and some things are entirely new to me. This series on Latitude with Attitude will explore local delectables in detail so anyone traveling here for the first time will know what they are getting into. I’m hoping to continue this style of post occasionally since there’s no way I can list every single menu item all at once.

Georgian food is distinctly unique but does carry some influences from other Caucasian countries, Eastern Europe, and the Middle East. Each historical province has its own distinct culinary tradition. Georgian cuisine is full of meat dishes, but also offers a wide variety of choices for vegetarians.

Today I’m going to start with five of my favorite Georgian foods. I’m not sure if I want to call them “basics” since Georgians love to eat and a wide variety of food is always present at any event.

But anyway. Without further ado, let’s get this deep dive started. 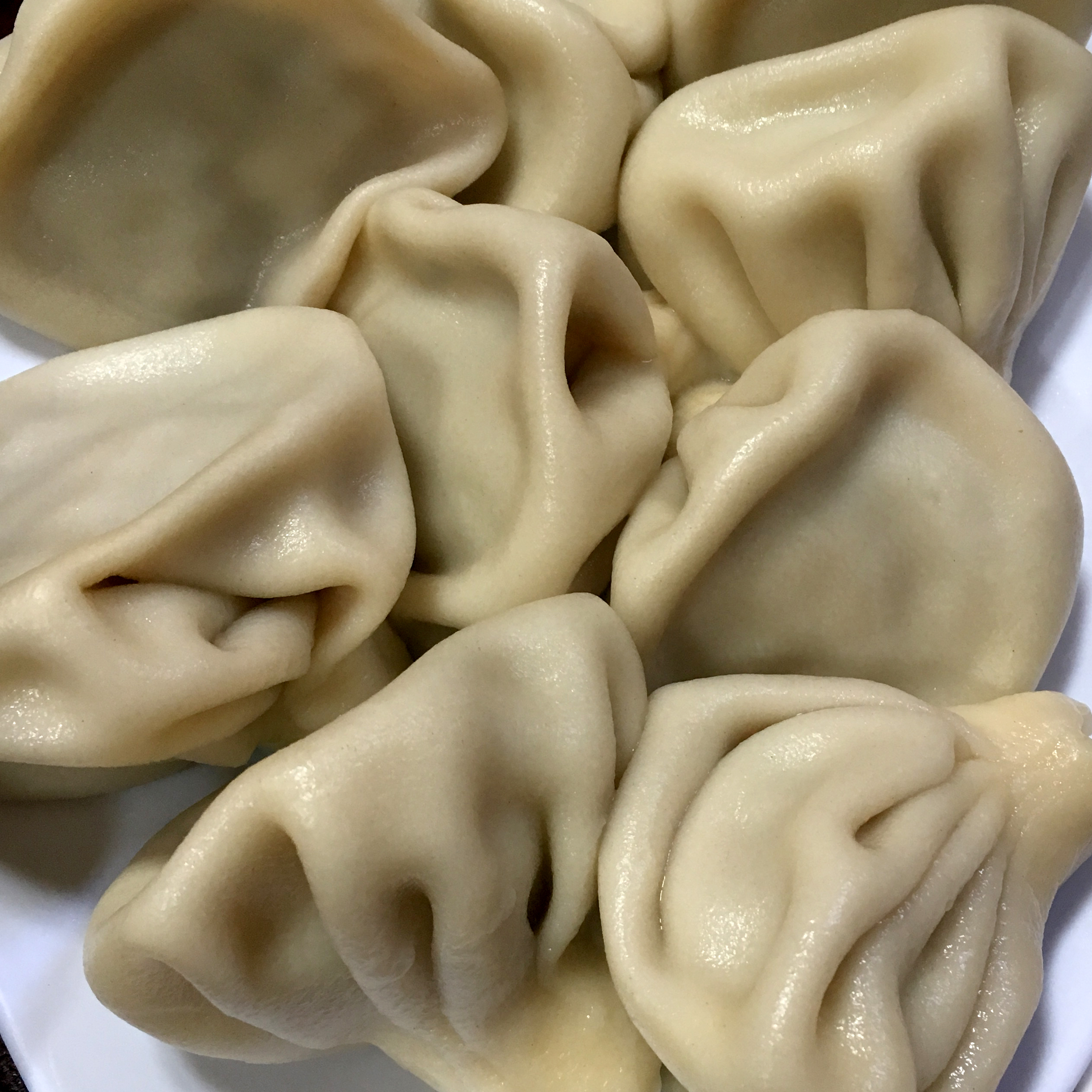 This is probably one of the most quintessentially Georgian foods there is. Aside from only eating it, Georgians feature khinkali on magnets, in artwork, on traditional patterns, just about everywhere. It’s a staple. Khinkali are large dumplings filled with traditionally with meat, usually a mixture of lamb or beef and pork and a few spices. I’ve also seen some filled with mushrooms, potatoes, and cheese as an alternative. They are very carefully and precisely made, and a perfect khinkali has 19 folds to close off the dumpling. They are boiled and served hot, usually with a sprinkling of black pepper. Eating khinkali is a fun and challenging experience. You hold the nob at the end and bite into the meaty part, all while the juice drips down your arm. It’s not unusual or rude to slurp out the excess fluids. Leftover khinkali is often fried the next day, which is also delicious. 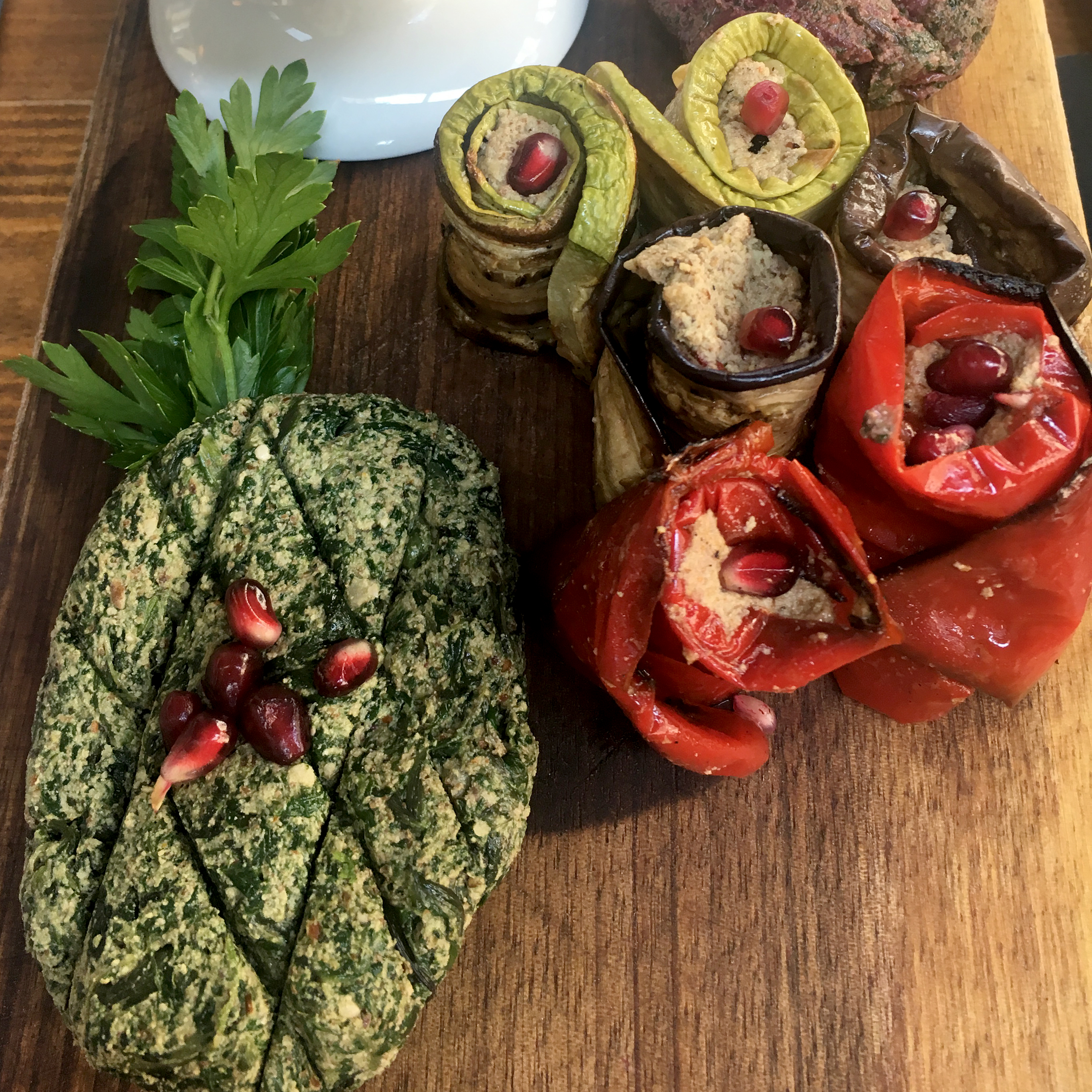 I’m still not sure how to correctly pronounce this one. The p and k next to each other make a sound I can’t quite get my tongue around. But I digress. Pkhali serve as appetizers at a lot of meals we’ve attended, and they are made of chopped and minced vegetables, such as cabbage, eggplant, spinach, beans, or beets, then combined with ground walnuts, vinegar, onions, garlic, and herbs. They are severed in balls or patties and aren’t really solid, but aren’t quite a paste-like consistency. We usually order or are served a variety of pkhali and, oddly, I think beet is my favorite. 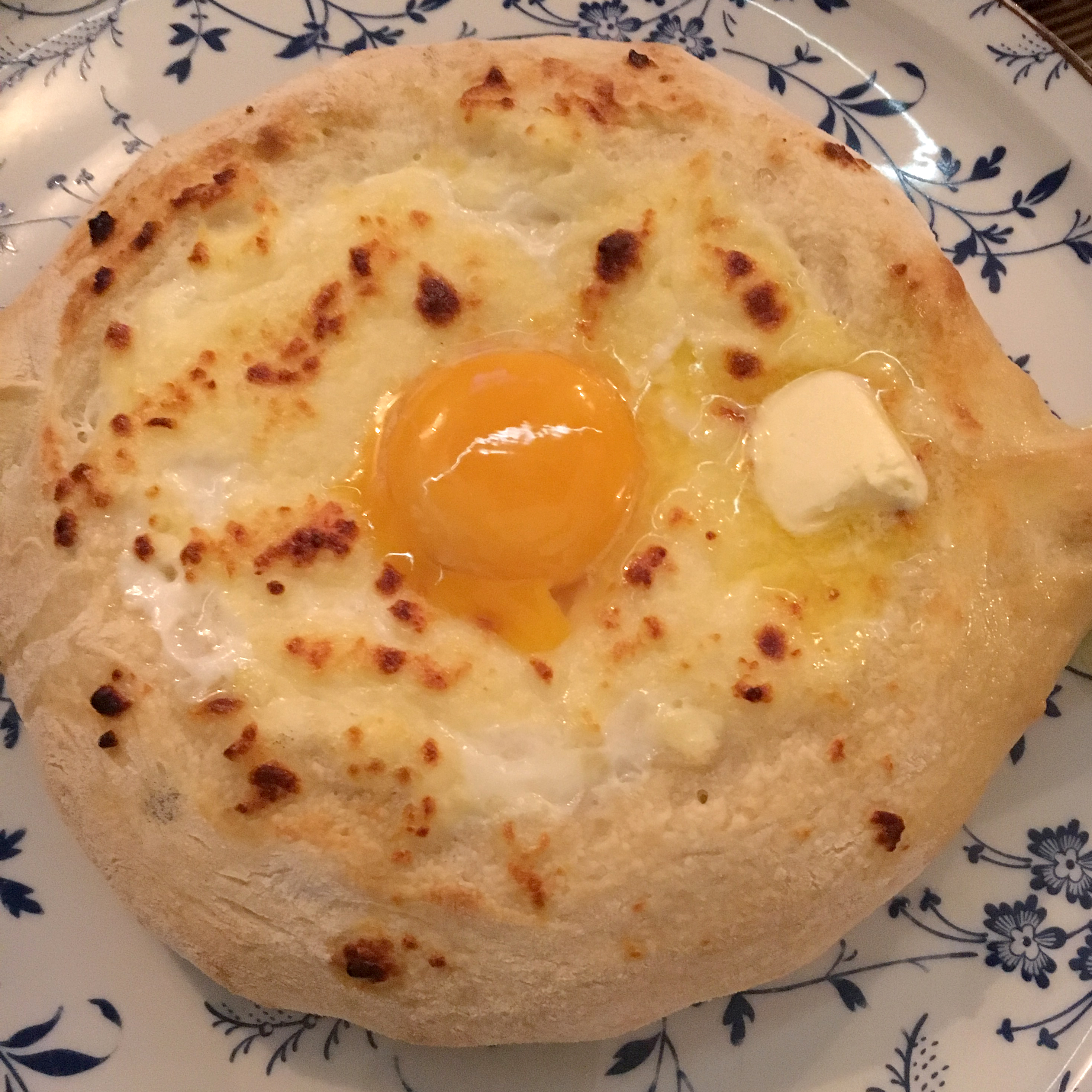 Another staple, khachapuri, is the delicious cheesy bread with several variations found all over the country. According to some sources, there are nine different types, but I’m familiar with only three: Imeretian, Mingrelian, and Adjarian. Imeretian is probably the most common, and it’s made by filling dough – sort of similar to pizza dough – with very salty cheese, forming it into in a round ball and then flattening it with a rolling pin before baking. Mingrelian is similar, but with added cheese on top. Adjarian is my personal favorite and is the type where the dough is formed into an open boat shape, filled with cheese, baked and the hot pie is topped with a raw egg and a pad of butter before serving. I can say I’ve successfully made Adjarian khachapuri, though my egg never wanted to cooperate quite a nice as my teacher’s. 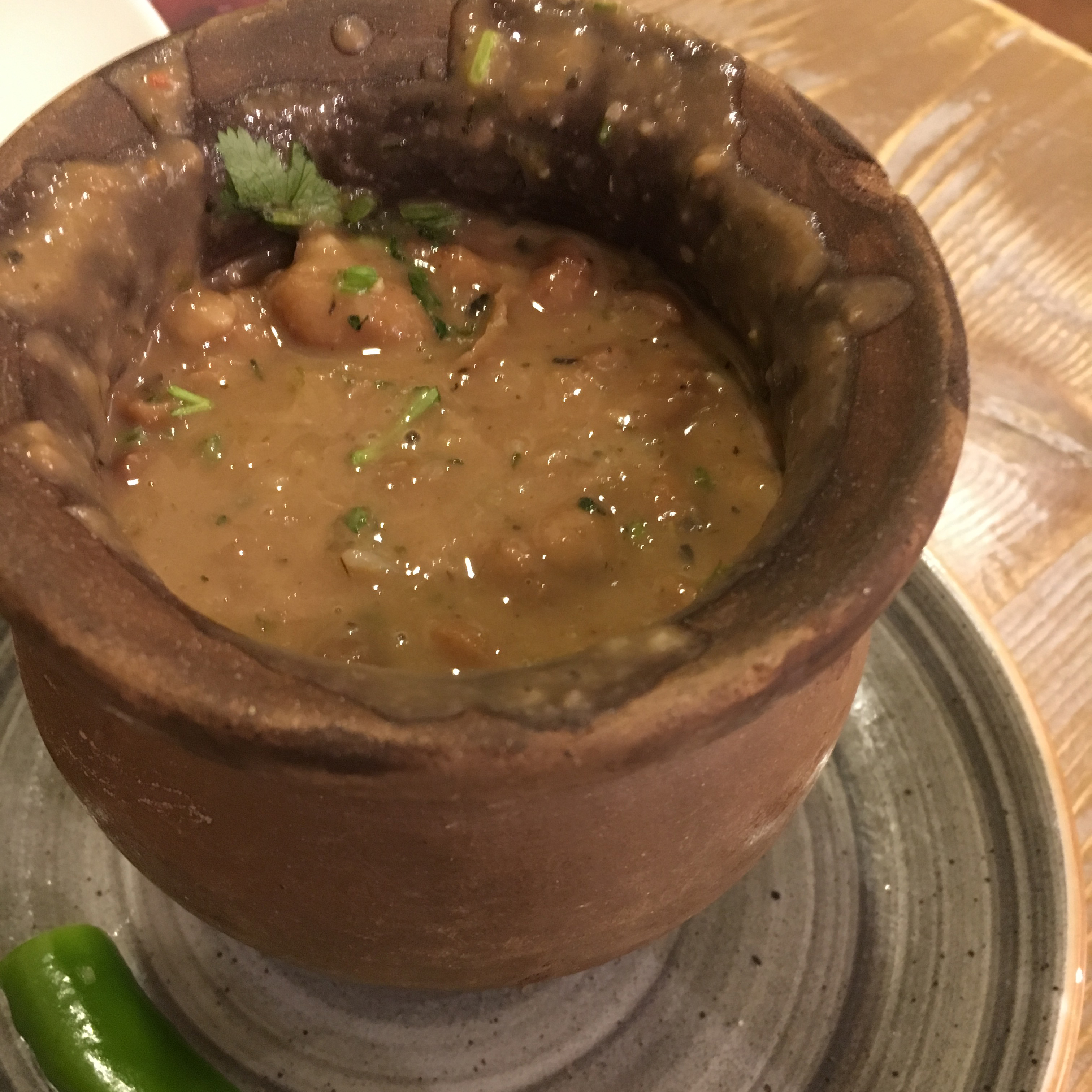 Not to be confused with lobiani, which is a bean filled pie, lobio is kind of like Georgia’s take on refried beans. There are several variations of both hot and cold lobio, and I much prefer this dish served hot. White or kidney beans are cooked and then mashed with garlic, onions, walnuts, coriander, marigold petals, chili pepper, and vinegar, and then marinated overnight. If being served hot, the beans are placed in a clay pot and heated slowly over the fire or a small exposed oven. Sometimes meat and/or vegetables are added as well. 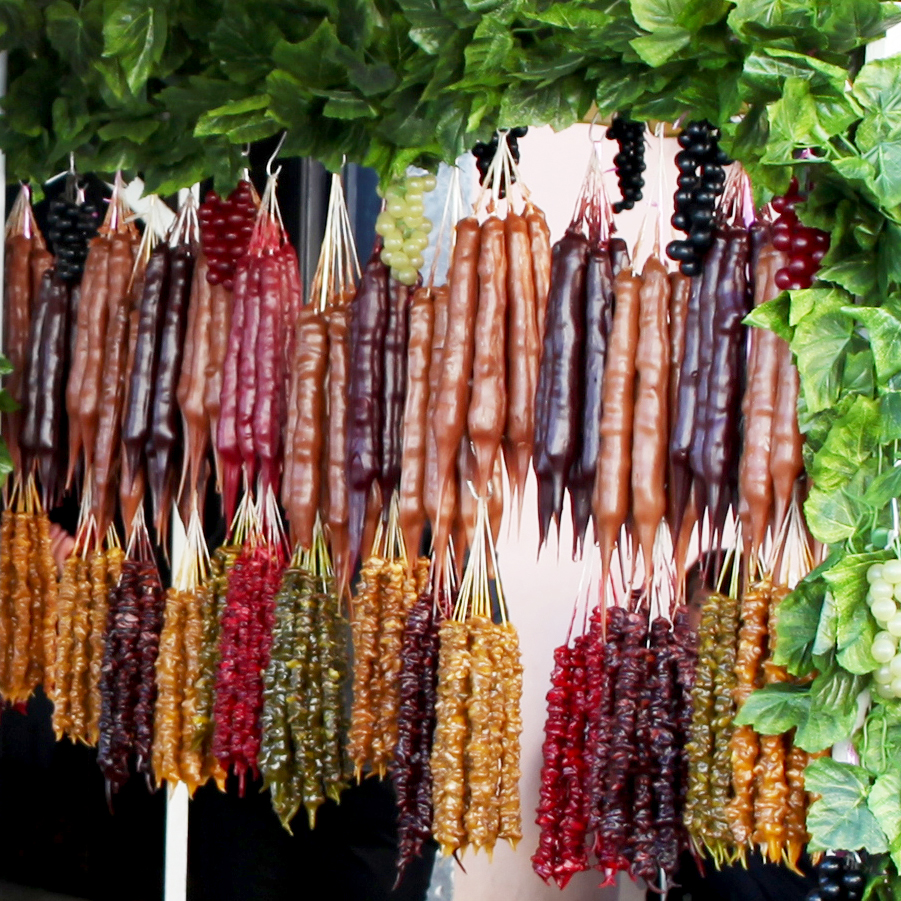 Contrary to popular belief upon seeing these oddly shaped sweets for the first time, they are not candles, no are they NSFW. They are actually a string of nuts (usually walnuts) on a thread dipped into thickened grape juice and left to solidify. Traditionally, churchkhela was used as a source of quick energy for military troops since consuming one of these sugar bombs in its entirety is about 8,000 calories. Churchkhela is now a treat and often a part of New Year’s and Christmas celebration. They kind of taste like Twizzlers with walnuts inside, or, apparently, Snickers bars. (I, unfortunately, can’t verify that personally due to my peanut defect, so do with that what you will.)

It’s no secret that Sean and I love to eat, and this initial list barely scratches the surface. I’ll be back in a few months with another installment, but for now, I hope this list was helpful. Happy eating! 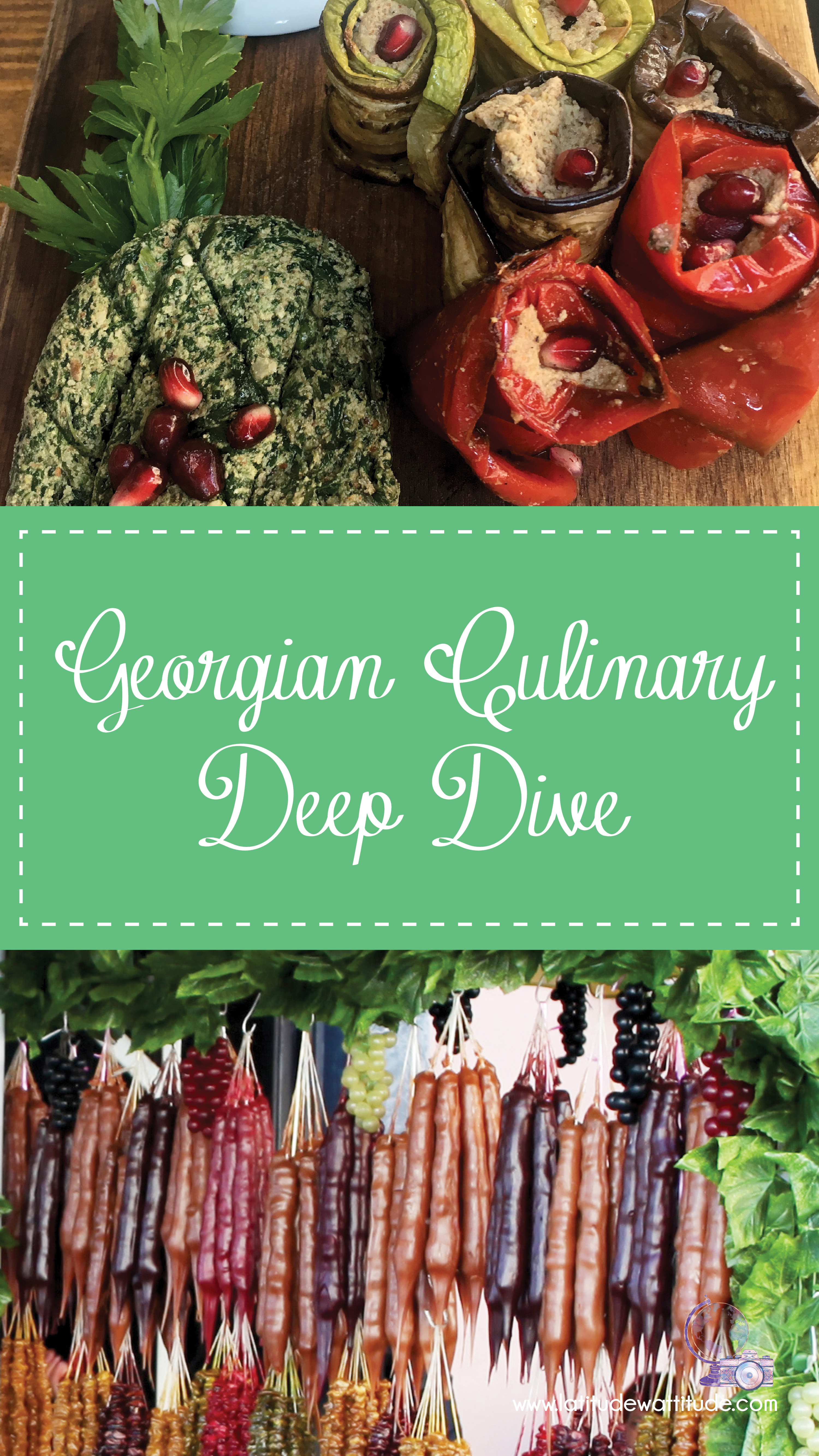