Before I get into this story – that I think is very funny – allow me to offer these two brief disclaimers:

My IUD and I had a good long run. I got it inserted in 2014, and we enjoyed five relatively blissful years. It carried me through our Dushanbe tour – where I absolutely was not going to try to bear children – and halfway through Georgia. I would have liked for it to hang out with me longer, but it was time for eviction. These five years really flew by.

Not only did I want it to stay for convenience, but I also was dreading the removal since I knew it would be a process. Here’s what happened.

When the IUD was inserted (which is excruciatingly painful!), after they cut the strings, it moved. Not in a bad way, but as it was finding its happy little home in my uterus it shifted a bit, and the strings disappeared from view. The doctors said this wasn’t an issue for now, but might make the removal process more tricky since there would be nothing to see and grab on to. While I knew we were in this for the long haul, that fact weighed on my mind slightly for the last five years, “removing this thing is going to be a whole mess….awesome.”

One nice thing about living in Tbilisi is we can use the local economy for medical treatment, and the Embassy has a clinic for OB/GYN appointments they use regularly. I went in last week to meet with the doctor we usually use, and she was very kind, gentle, and thorough with her explanation. After trying to remove the IUD the normal way without any kind of intervention, she stopped and told me I would have to come back for a small procedure next week. She was concerned it would get too painful and she was worried about it breaking. They would have to widen my cervix manually to see what was going on. Luckily, the ultrasound showed it in the right spot, but it was just so happy in there. I guess it was going to put up a fight.

Even though the procedure was not a huge deal and even though the doctors were all very gentle and careful, this kind of news is still upsetting. Anything to do with that particularly sensitive, private, and important part of a woman’s body is a touchy subject. The idea of some kind of complication that could cost me my reproductive health was hugely unnerving. I was a bit teary after leaving that appointment and spent the next week eating carbs and cuddling my animals who must have known mommy was upset.

So on Wednesday, I went back in for the removal. The appointment began with the numbing of my butt…which…was very weird. One shot of lidocaine to each cheek. They said it was in case they needed to use any extra tools or force to get the IUD out it would be more comfortable that way. Incidentally, that’s the only part of my body that still aches two days after the procedure itself.

As I lay on the table waiting for the numbness to take effect, a full team of seven doctors and nurses set up shop. I believe they were using me as a teachable moment – which I’m okay with – but the sheer comedy of having seven Georgian women staring so intently at my lady bits was equal parts embarrassing and hilarious.

Then came the dreaded numbing of my cervix. For anyone who’s not experienced this, you know when you go to the dentist, and they numb your mouth? How you can feel the pain of the needle, and then pain as the medicine works its way in? YEAH. HOW ABOUT THAT BUT IN YOUR CERVIX?! Holy crap did the first injection hurt.

But something funny happened after the second. Apparently, at least for me, there is a direct cervix-brain connection. Immediately after that second injection, my hearing went weird. It sounded like someone turned up the AC in the room, and all I could hear was the fan. But also, I could hear the nurses and doctors? It was bizarre. Then my hands started to feel tingly.

I assessed the situation: am I passing out? My vision is still clear, so no, I don’t think so? I’ve passed out before, and I know my vision is always the first thing to go as it happens. Didn’t explain the hearing loss and tingly fingers though. I continued to monitor myself. Hearing: weird. Speech: ok (I think). Fingers: tingly. Vision: still ok somehow.

I asked the nurse closest to me if it was normal to feel tingly, and she laughed gently and said yes, I was fine.

As I continued to marvel at this sensation which I can only liken to passing out without passing out, suddenly everyone in the room told me to look down: the doctor doing the work was holding my IUD. I actually cheered. I hadn’t felt a thing.

They kept me in the room for about 15 minutes after the procedure to make sure my blood pressure was stable before letting me go. I went back to the embassy and, still loopy on anesthesia, joyfully overshared that MY IUD IS OUT AND IT FELT SO WEIRD GUYS! I think most everyone I talked to was amused, so I’m only slightly embarrassed by my antics.

And yes, I’m aware that this blog is also a gross overshare, but at least this time I’m doing it with a sound mind instead of hopped up on anesthesia.

Side note: Uh. What kind of photos could I possibly use for this topic?! I went with one of the first photos after having it inserted in 2014 and one of the last photos from before removal. Because…symbolism?????? 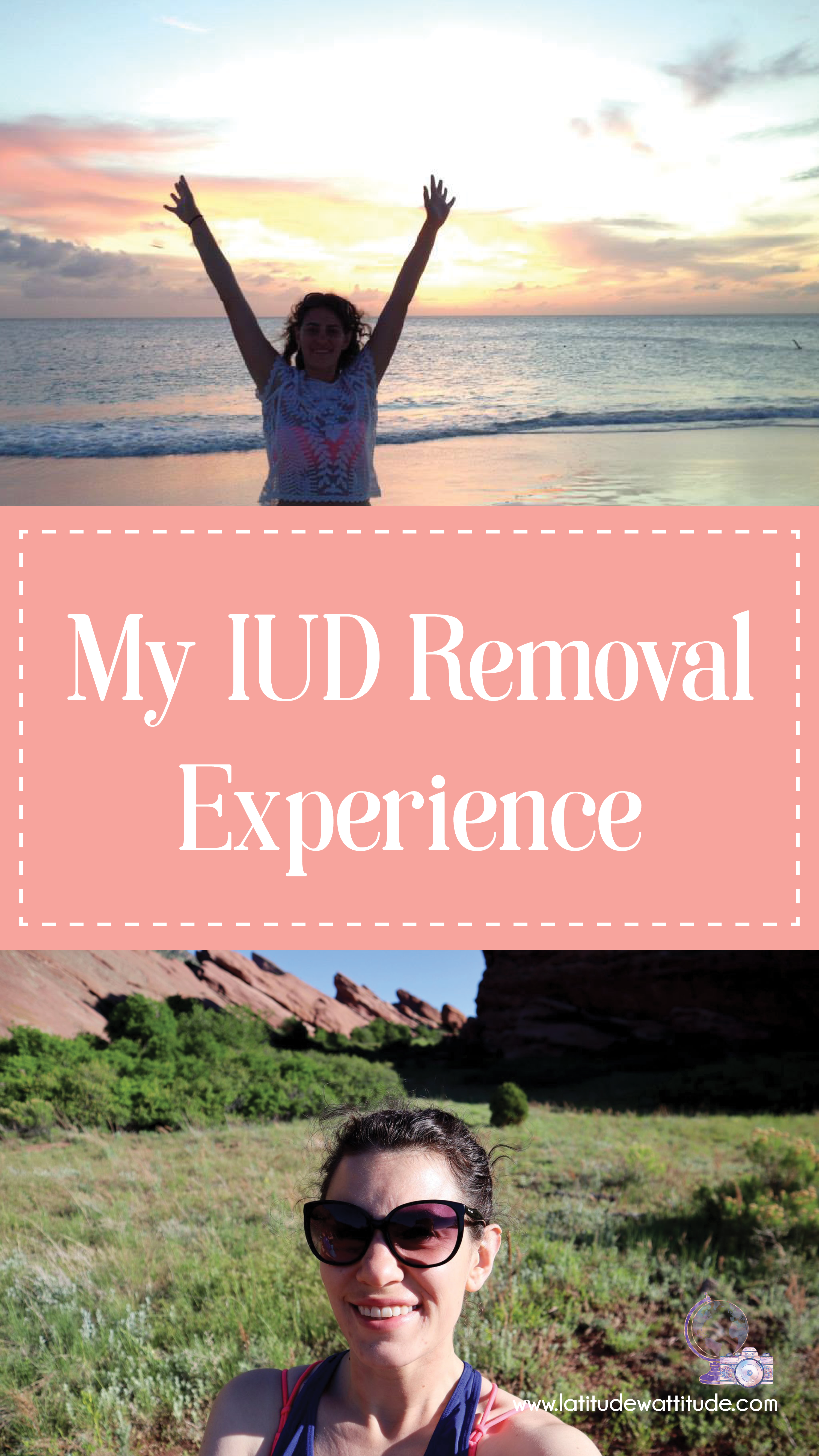 2 thoughts on “My IUD Removal Experience”