Although I spent 23 years living in Wisconsin, yesterday was my first-ever Green Bay Packer football game. I know some people have been wondering why it took so long for me to partake in one of our state’s great traditions. I have several reasons.

For one, my parents are from Chicago, and though my dad doesn’t really care about football (he’s a baseball guy) he vehemently hates the Packers. When we were kids, he would tell us that babies in Chicago were implanted with a chip designed to make them loathe the Packers with a burning passion. Secondly, tickets are expensive and hard to come by. And third, of course, we don’t live here anymore. 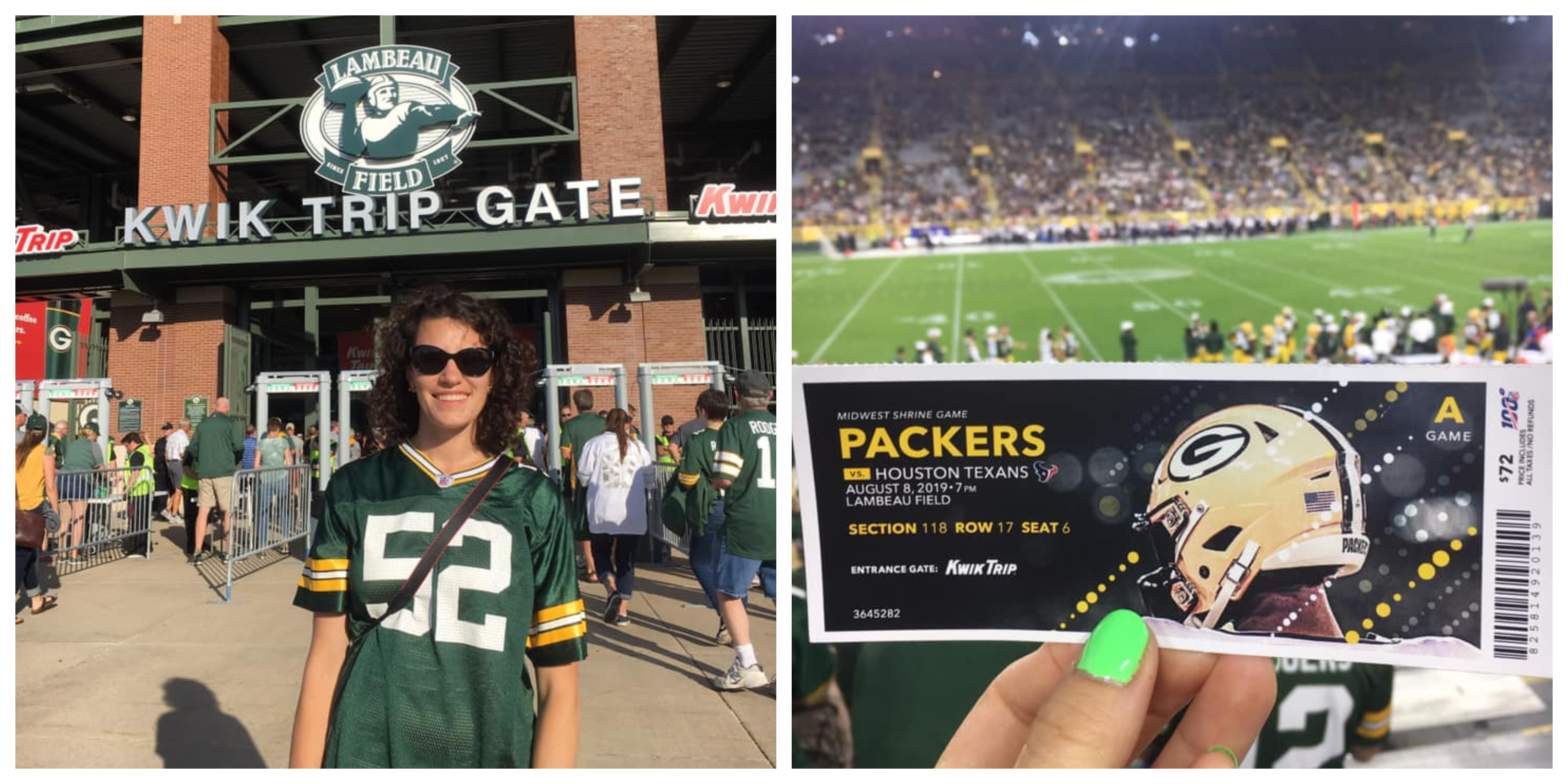 In 1996 I was introduced to the world of Green Bay football. My first-grade teacher was an absolute Packer fanatic. The entire classroom was decorated green and gold, and she used any excuse to incorporate the Packers into our lessons. This was also the age of the horrific Macarena, and of course, Packer fans remixed it into the “Packerena” which is probably the most embarrassing thing Wisconsin has ever done. But, at age 6-7, I knew all the words. Coincidentally, the 96-97 season was a Super Bowl year for the Packers where they beat the Patriots 35-21. It was the best time.

Today I am mildly interested in football. I enjoy going to games and watching them on TV, but when we live overseas, it’s challenging to keep up. Live broadcasts come on at 4:00 am, and even the recordings of games are reliable. Sean and I always make a point to catch up on America’s favorite game any time we are home. 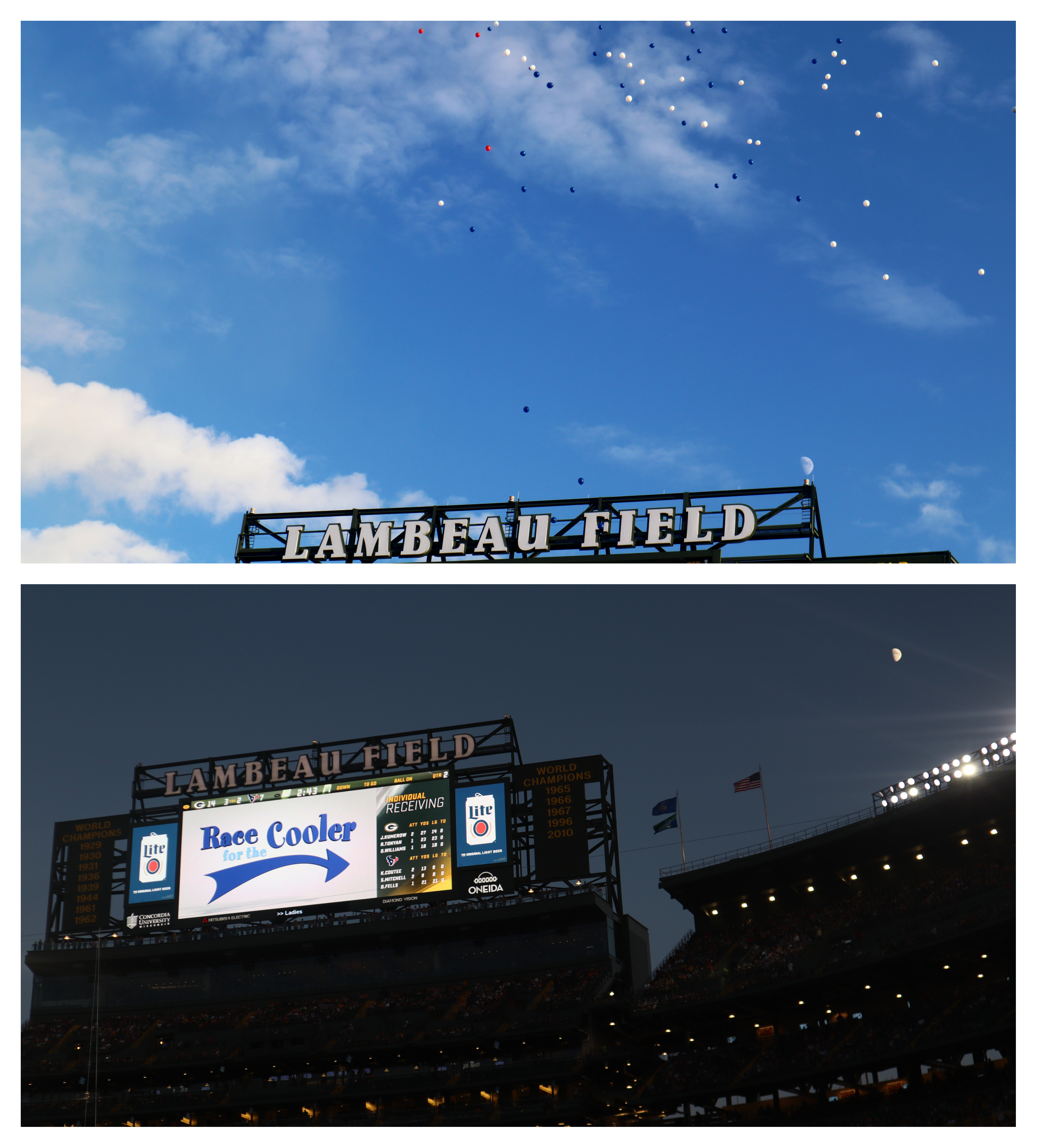 Over the past several years, the stadium area of Green Bay has really built itself up. There’s a new Title Town district with lots of fun activities for kids and adults. There’s a 40-yard dash and playground, live music, several restaurants, and plenty of yard games. It’s like a huge public tailgate. We spent a few hours exploring this new part of town, including dinner at Hinterland brewery. It was a fun way to get into the spirit of things. 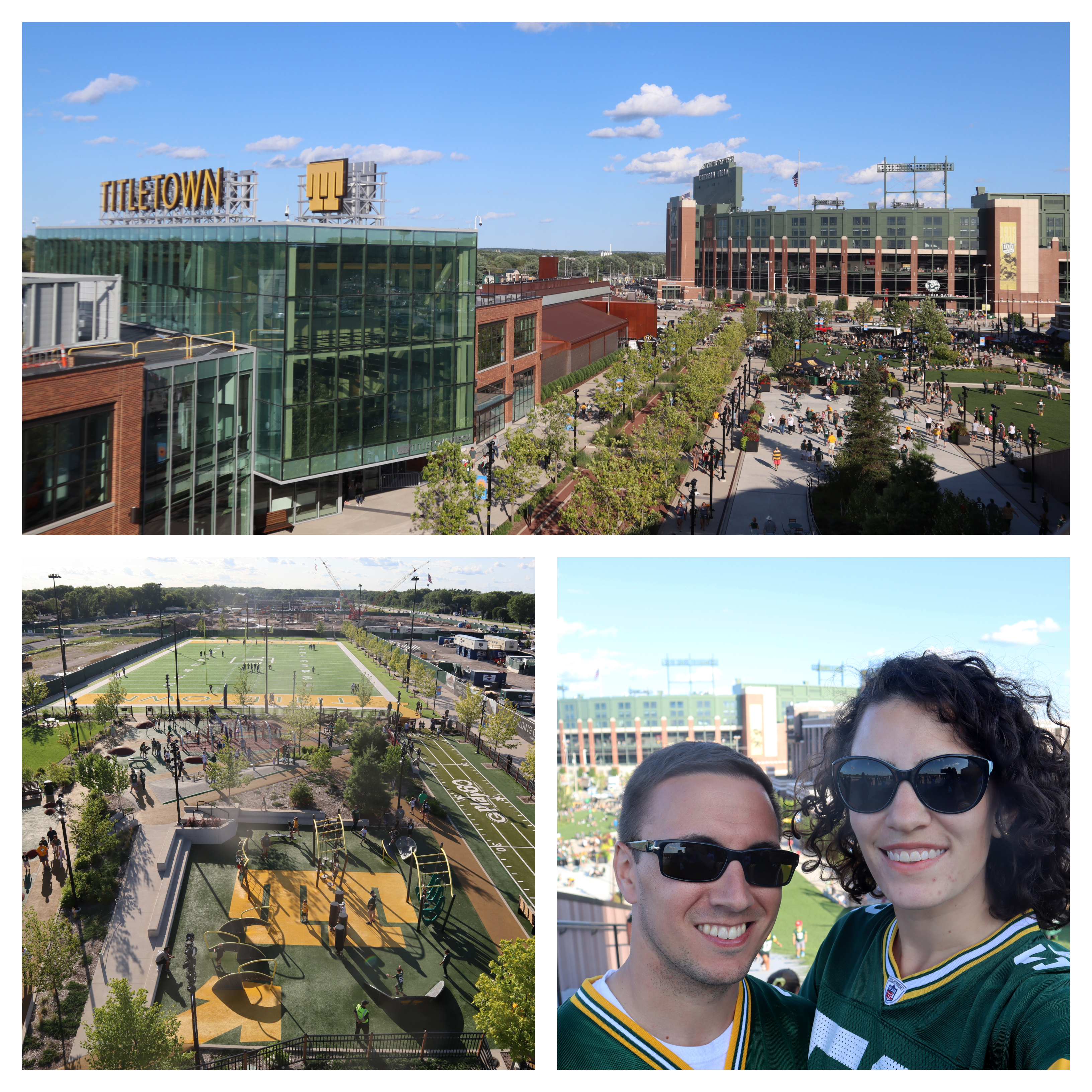 It’s a strange feeling, finally seeing something in person after years of seeing it on TV or from the outside. Lambeau Field is an impressive structure that absolutely dominates the area, but what was so odd was how small the field looked inside the massive bowl. I spent my college years going to Wisconsin Badger football games, so I’m quite familiar with football fields, but it still was odd to me. We had excellent seats – 40-yard line, 17th row, on the Packer side – which made the experience even more surreal. I was actually at a game! Not just watching it on TV. So incredibly bizarre. 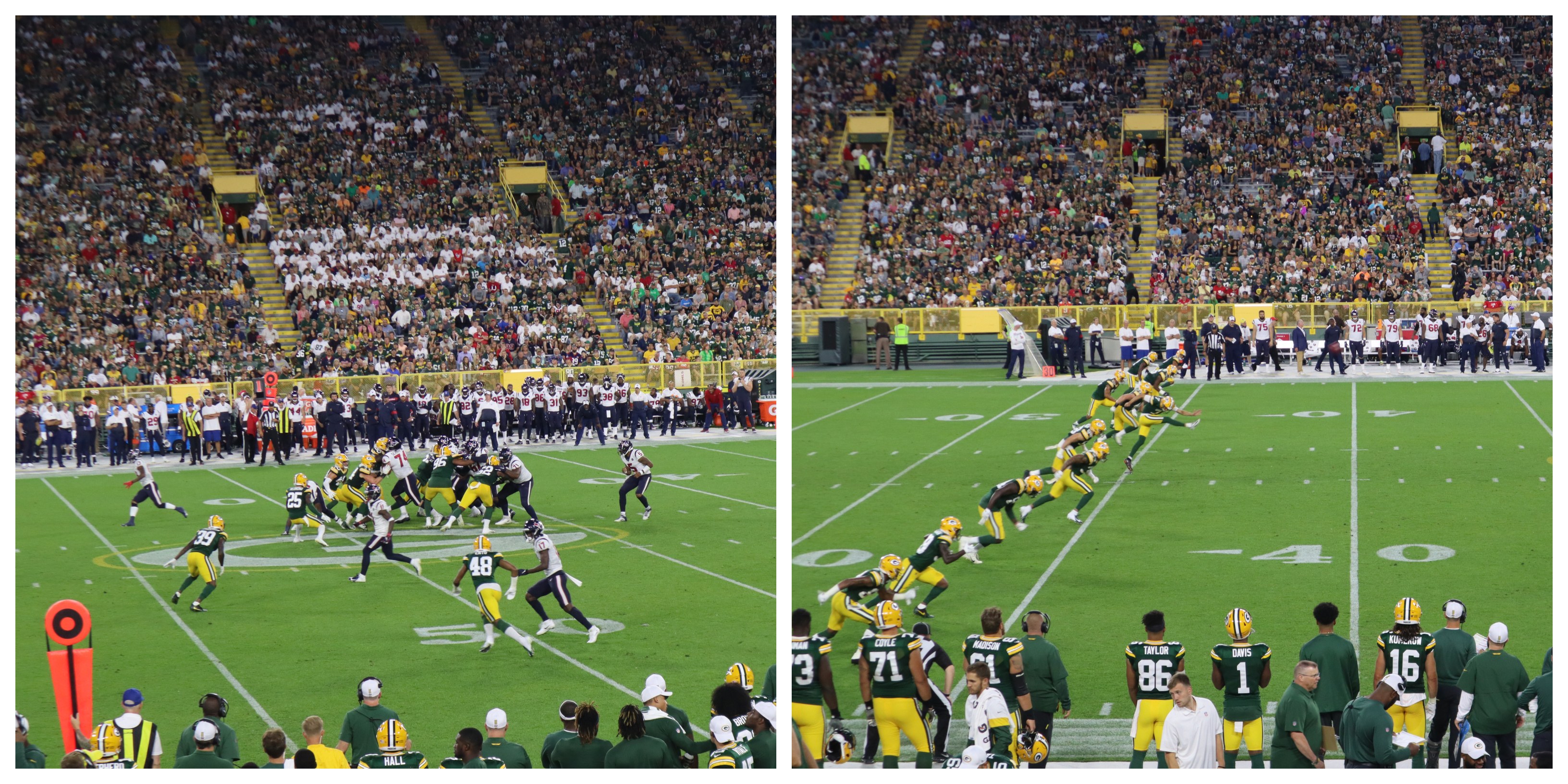 The game itself was fun, but not terribly high-stakes. It was the first pre-season game, so very few starters were suited up. There were some exciting plays on both ends, but the atmosphere was much more casual than I would assume a regular-season game would be. The Packers did end up winning, which was, obviously, the icing on the cake. 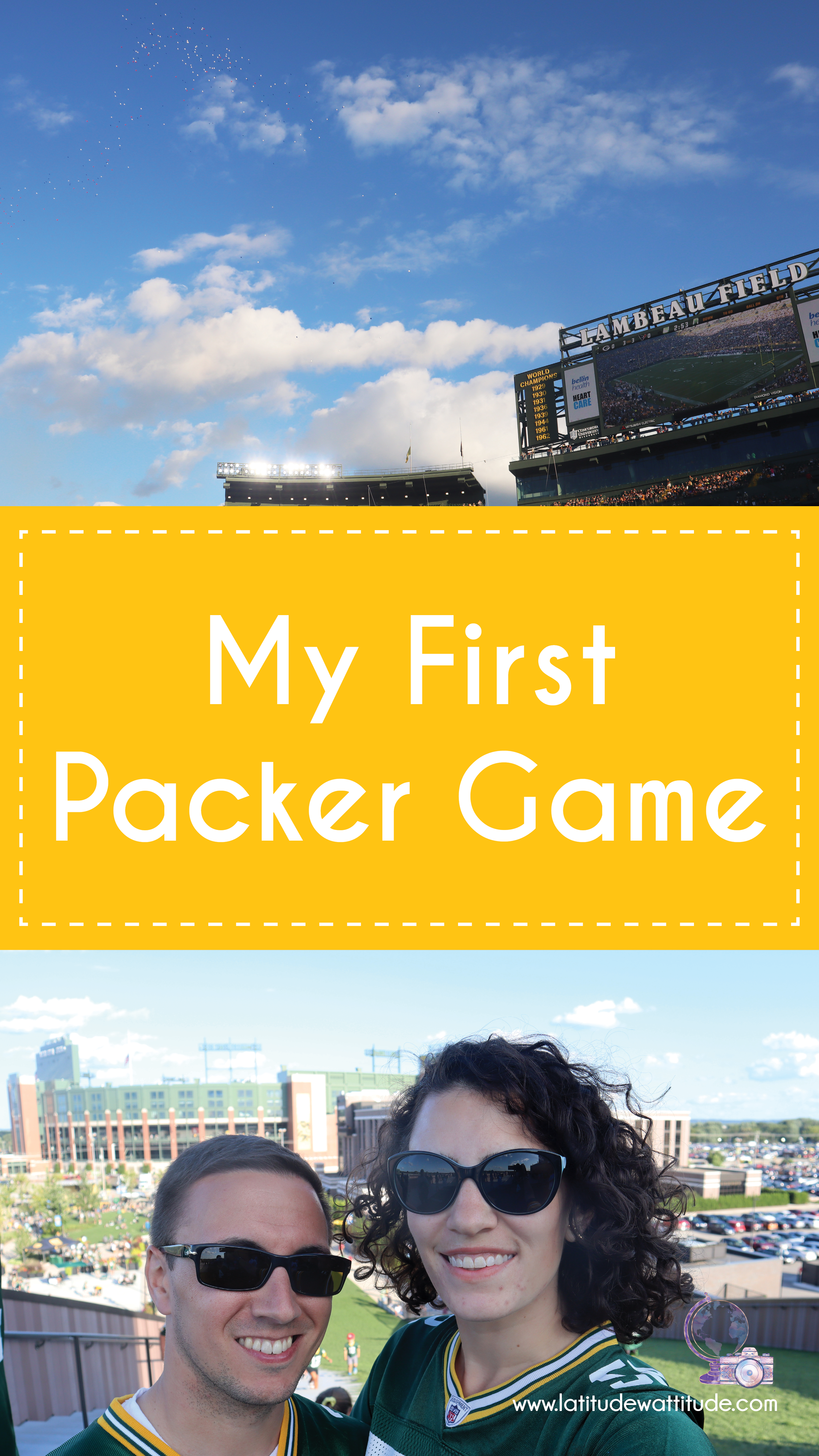