Santorini was always one of those fantastical far-away places I definitely wanted to visit but didn’t know when we would actually make it over there. I learned about Greece and Santorini at a fairly young age when I read The Sisterhood of the Traveling Pants book series. You know, like every other young teenager in the early 2000’s.

Sean also always wanted to visit Greece – more specifically, Sparta – so we often off-handedly discussed going. It was always an option we offered early in planning a vacation, but for some reason, it never came to fruition. I think we often chose a more exotic location, or somewhere that is more difficult to access from the U.S. One major perk of being overseas: having a different jumping-off point for travel.

As my 30th birthday approached, I often joked about needing to take a birthday vacation. Sean and I were both born in 1989, and our trip to the Azerbaijan Grand Prix served as his birthday present this year. However, I knew that the chances of squeezing in an extra trip this fall would be pretty slim. We were home for five weeks in August, and I’m currently sitting in Kansas City for a wedding this weekend. The idea of jamming in another trip in those six weeks in between seemed impossible. 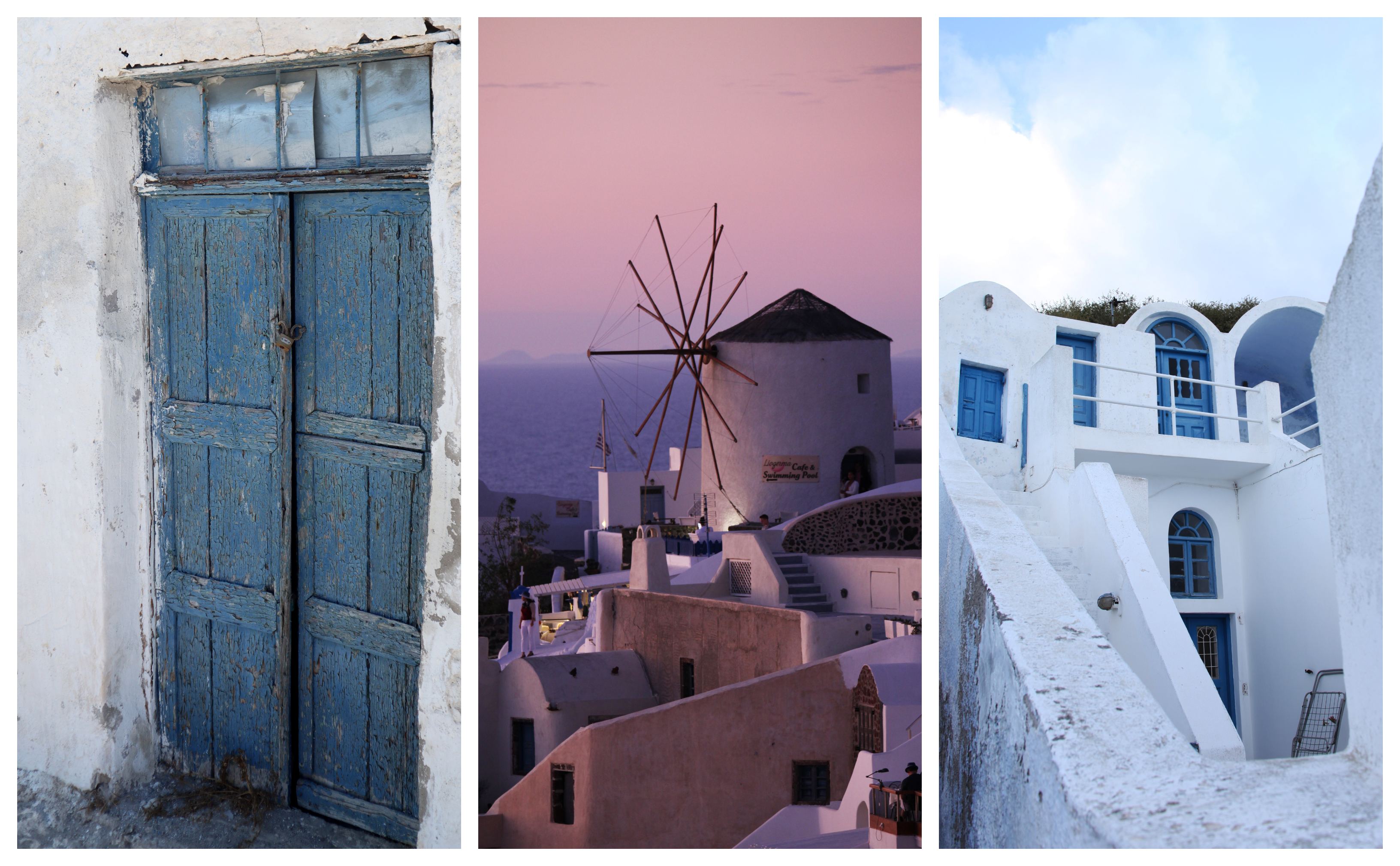 A few weeks ago at a rather casual dinner out, Sean turned to me and said this “I have everything planned, I just need to pull the trigger. Can you take off Friday, October 4 for a birthday trip?” I was shocked, to say the least. Not that he had planned a trip – he’s often the master organizer of our adventures – but that he was suggesting we forego sleep and sanity just for my birthday. I told him I would try to take off, and asked where we were going.

He wouldn’t tell me.

On my birthday, he started leaving me clues. I had three legitimate guesses at this point: Santorini, Barcelona, or the Maldives. He had told me at this point it was a five-hour trip with one connection – which, really doesn’t narrow anything down from Tbilisi. His first clue threw me for a loop and I guessed Italy. On the second, I guessed Santorini and he confirmed that yes, we would be spending three days on this magical island. I tried not to burst into tears on the reWoven tour. 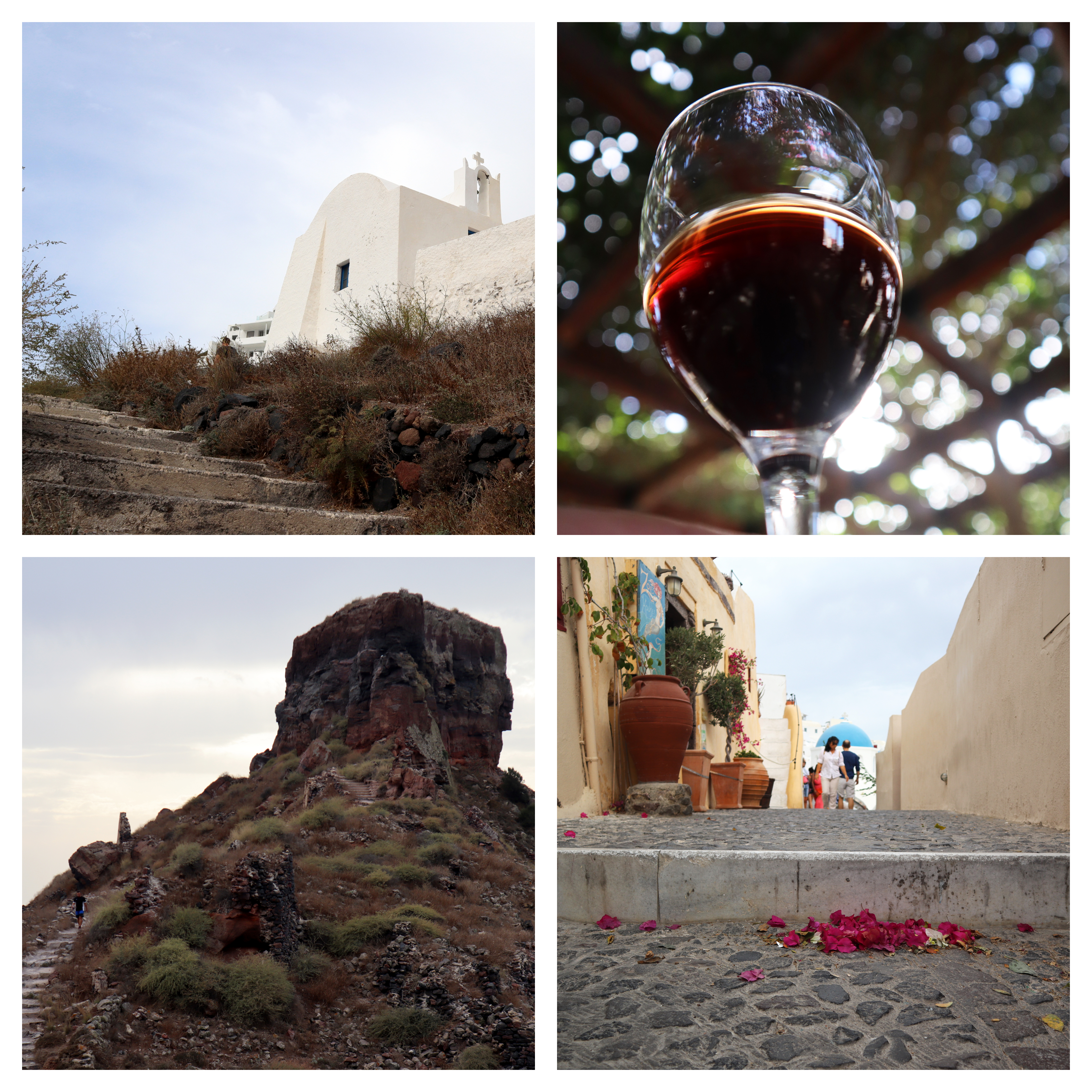 From Tbilisi, Aegean Air flies to and from Athens from the spring to fall and then has multiple connections each day to Santorini. We arrived on the island around 11:00 am and took the public bus to Fira and then Oia. We had meant to get off at Imerovigli, where we were staying, but the operator told us it was a one-way, nonstop bus. No matter, really, it’s Santorini for goodness sake! I was just happy to be there. We enjoyed a delicious lunch and wandered around a bit before making our way back to our hotel.

Imerovigli is a rather small town in the middle of the island which is meant to be one of the best vantage points for Santorini’s stunning sunsets. We stayed at Sophia Suites which was absolutely wonderful. We had a huge room with an indoor heated pool, a private terrace, and a private outdoor pool.

That first night we had booked a private dinner overlooking Caldera. Unfortunately, that evening was cloudy so we didn’t really get to see a Santorini sunset it all it’s glory, but the food was wonderful and the staff did everything they could to keep us comfortable when the rain picked up. 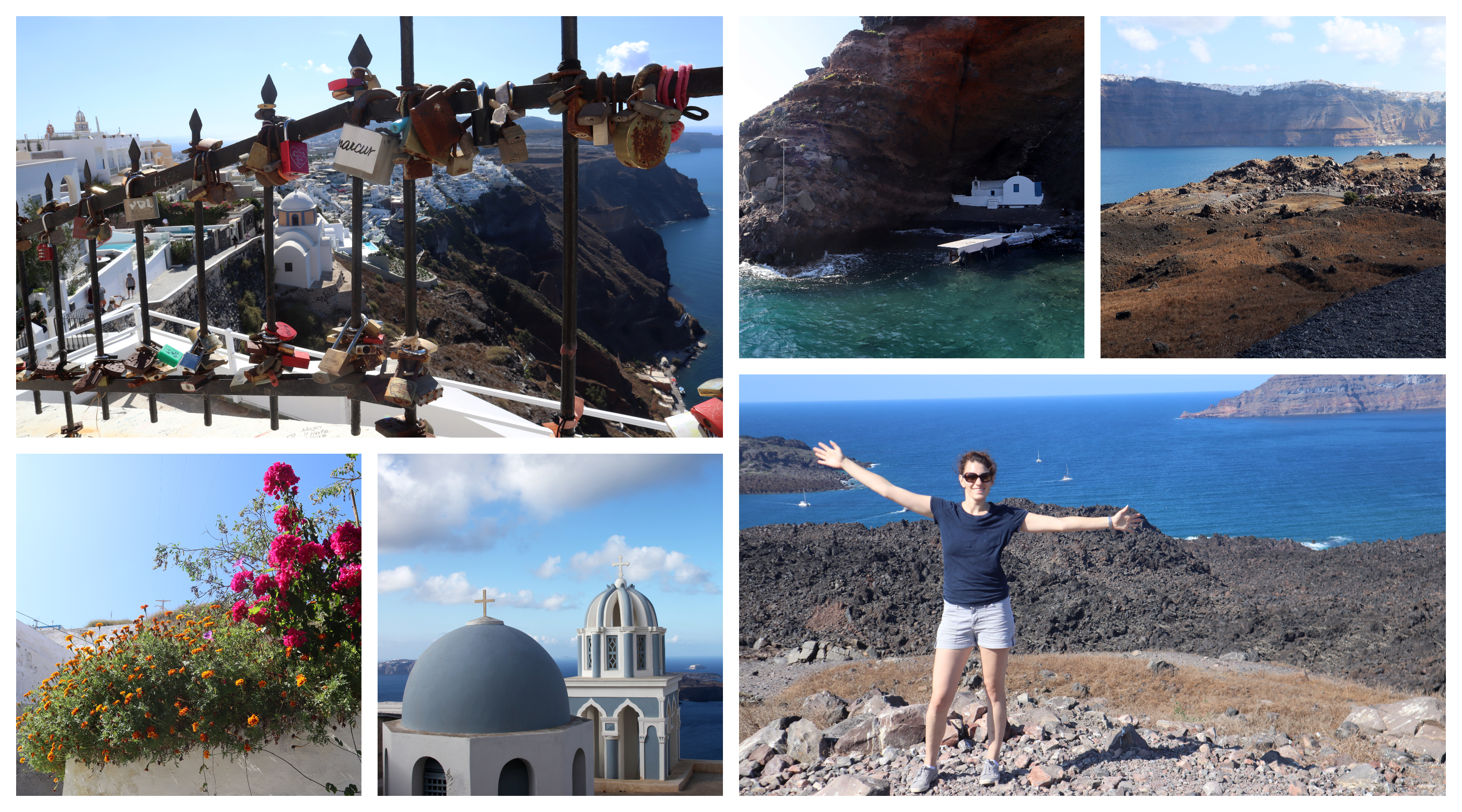 The next day was our only full day on the island and we were determined to make the most of it. Part of the reason Sean told me about the trip a week early – he was toying with the idea of keeping it a secret until we got our boarding passes – was because he wanted my input on a boat excursion on Saturday. As you can imagine, there are a ton of options ranging from catamarans and sunset to full-on hiking adventures. We chose the premium half-day tour from Caldera’s Boats and absolutely loved our experience. Our first stop on the tour was the volcanic island of Nea Kameni in the center of the caldera. We had about an hour to hike all over this still-active volcano. From here, we visited Palea Kameni and had a chance to jump into the Aegean Sea and swim to the hot springs.

Our final stop was the island of Thirasia directly across from Imerovigli. We had about two hours to explore, so of course, Sean and I chose to hike up to the top of the island for lunch. I think that day we hiked 11 miles, 220-ish flights of stairs, and over 20,000 steps. Santorini is not for the faint of heart. When we got back to Fira we decided to let the donkeys do the work and paid 12 euros for a ride up the stairs. For someone familiar with horses, I can tell you that this was a bit of a wild ride. At one point my donkey was definitely running, and he was completely unamused to have a human on his back in the heat. Still, you can’t leave Greece without this experience. 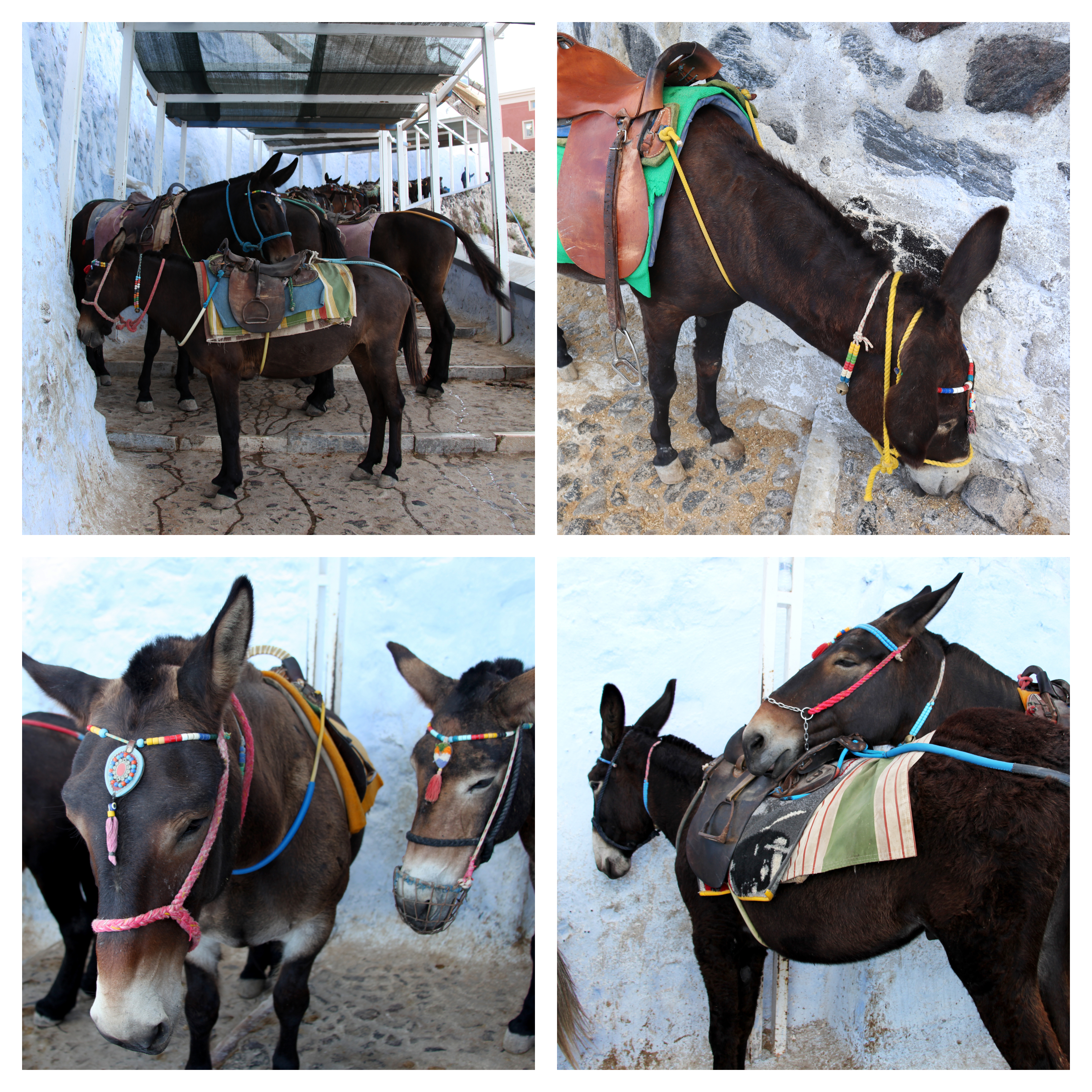 That evening we went back to Oia for the sunset. Normally we would steer clear of large crowds, but the sunset in Oia is something you simply cannot miss. After an unfortunately cloudy evening the night before, Saturday night turned into an absolutely spectacular sunset. We made our way to Oia castle and watched the sun vanish over the horizon with hundreds of fellow tourists. It was magical, especially after most everyone left and we made our way to the front as the sky turned purple and Oia lit up with nightfall. I think I took these photos 100 times over. 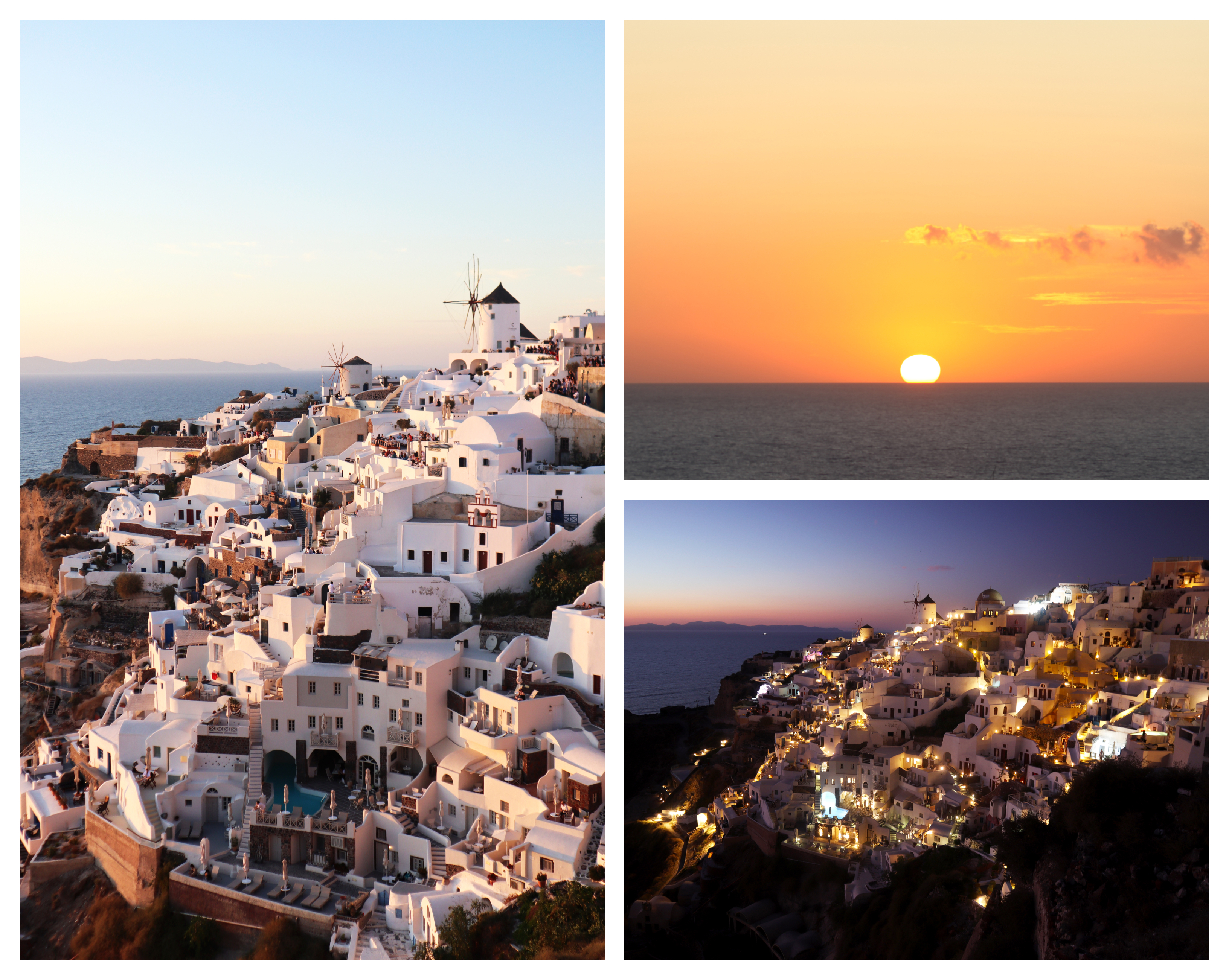 Our third and final day in Santorini was spent away from the coast visiting a few of the island’s wineries. Santorini’s volcanic soil and unique grape varieties make for some very interesting flavors. Sean and I have an old (stupid) joke about Vin Santo wine, so we enjoyed trying the Greek version and learning about the unique cultivation methods used on the island.

That evening, our flight left late so we managed to sneak in one more magnificent sunset. I finally figured out the timelapse setting on my new little camera and managed to capture this beautiful place one more time.

Santorini will always be special to me. I’m sure we will return at some point in our lives. If you ever have the opportunity to visit, I highly recommend doing so. Just make sure you have your step tracker and comfortable shoes. Those stairs are no joke. 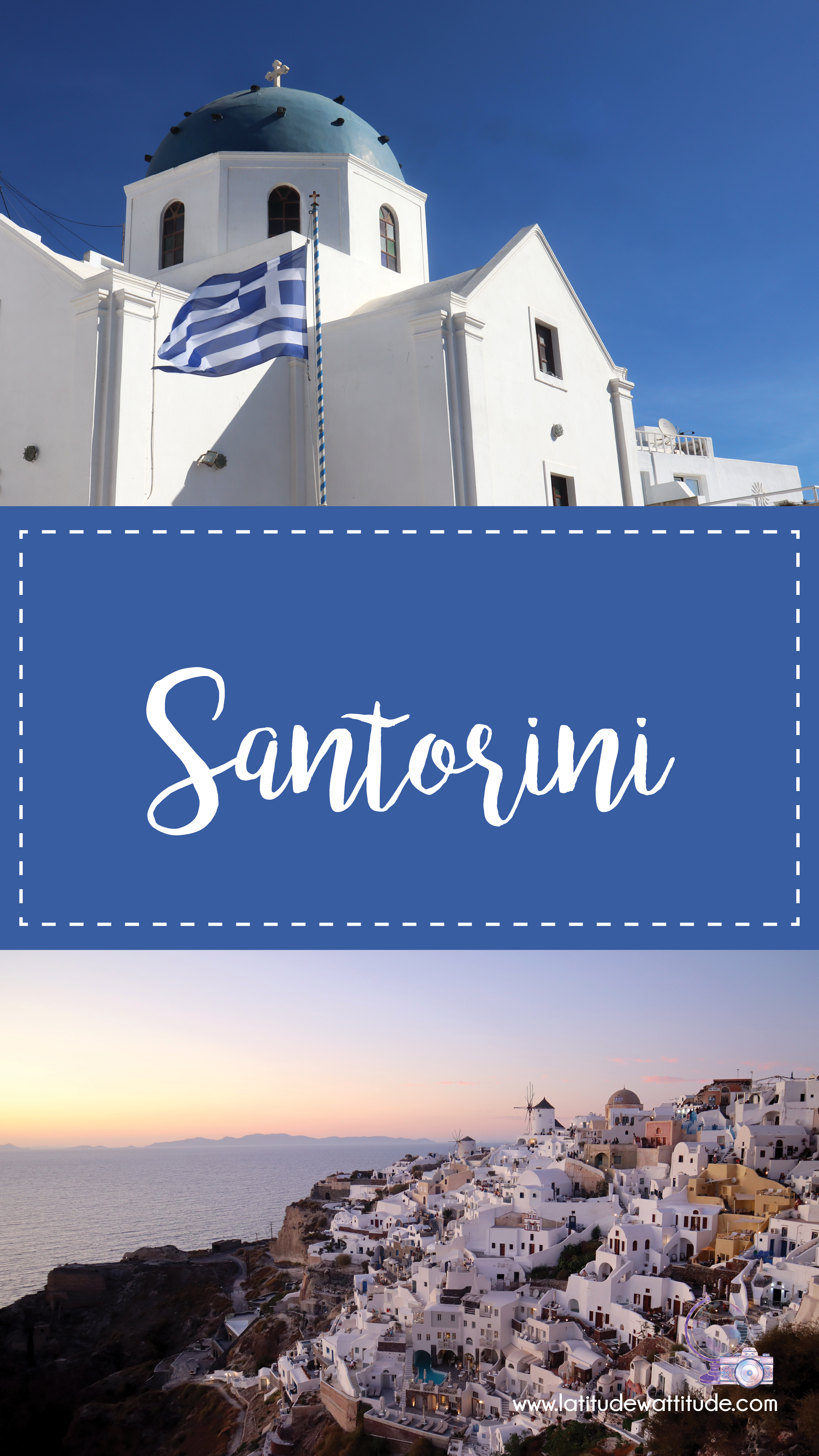