As Georgia is slowly reopening, I wanted to finally write about the trip Sean and I took with my parents in early March. They managed to sneak in and out of Georiga before the craziness with COVID-19 really kicked off for the entire world. While they were here, we embarked on a four-day driving trip out west to see some of Georgia’s iconic scenery. This trip can easily be replicated and wasn’t too jam-packed that we were left feeling exhausted at the end of it.

Day One: Uplistsikhe and Gori, Overnight in Kutaisi

We left Tbilisi on a Thursday morning around 9:00 am and headed about an hour west to the cave city of Uplistsikhe. This cave city dates back to the late Bronze Age and was inhabited until 13th century AD. Between the 6th century BC and the 11th century AD, Uplistsikhe was one of the most important political and religious centers of the region.

Uplistskhe covers an area of almost 40,000 square meters and is divided into a lower, a central, and an upper area. The central area, which contains most of the rock-cut structures, is connected to the lower area by a narrow tunnel. At the top of the complex is a Christian stone basilica, dating from the 10th century. The rock-cut structures include a large hall, called Tamaris Darbazi, pagan places of sacrifice, dwellings, as well as functional buildings, like a pharmacy, a bakery, a prison, and even an amphitheater. The terrain is quite rocky and some parts are steep, so sturdy shoes are definitely recommended. 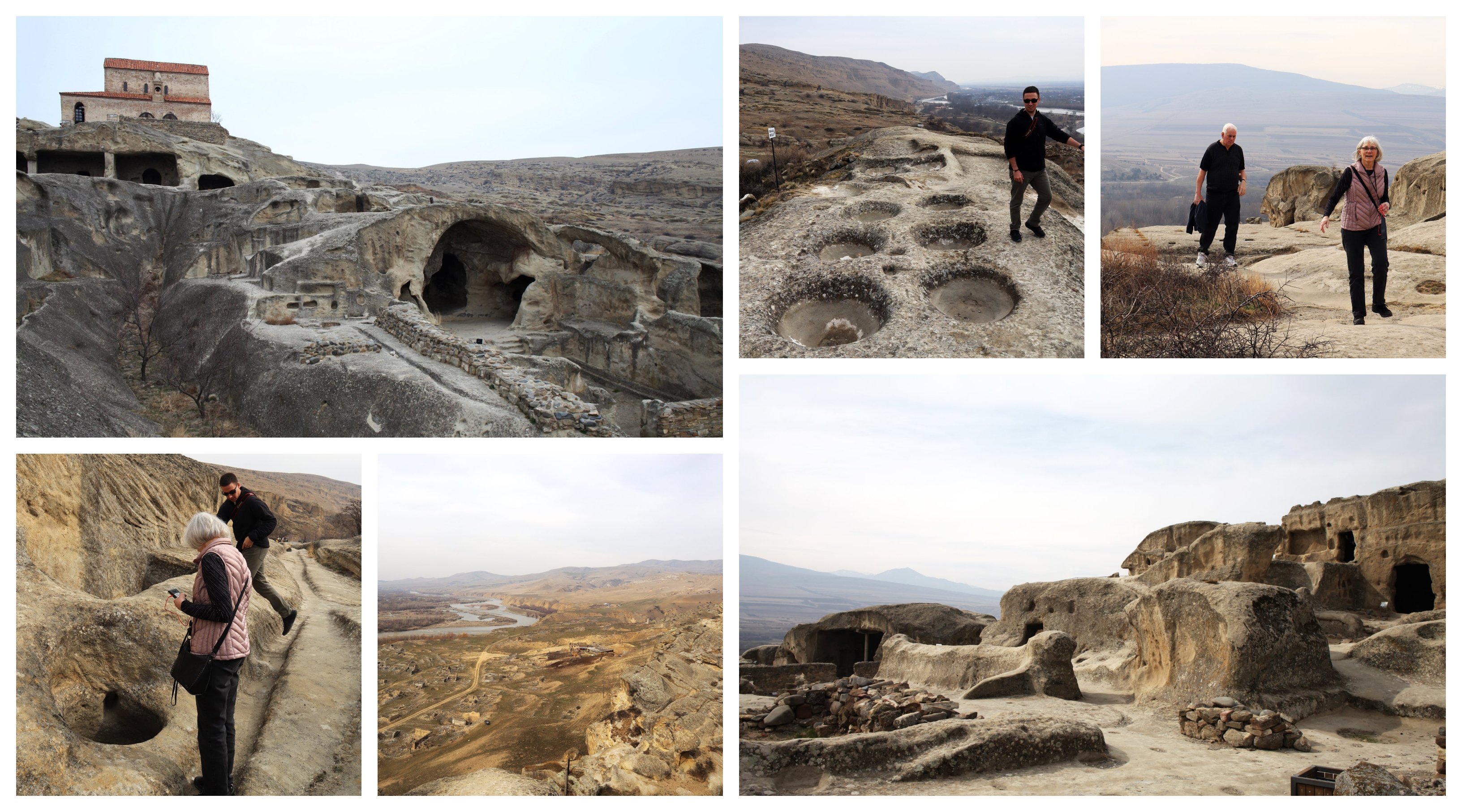 After Uplistskhe, we stopped in Gori for lunch at Chinebuli restaurant which is just off the main square. I saw a few locals order khinkali so we did the same and it was absolutely delicious. Once full, we attempted to visit the Stalin Museum across the street, but since this was the start of COVID-19, it was closed for cleaning. Hopefully, we will manage to see it before we leave Georgia since I’ve heard it’s completely fascinating.

At this point, we departed Gori and traveled 2.5 hours further west to Kutaisi. We arrived right around dinner time and were treated to a lovely spring sunset over the river. We stated at the Best Western. The rooms were clean and comfortable, and the stay also included breakfast and free parking. We spent a few hours walking around and exploring the city. Sean and I have driven through Kutaisi many times, but this was our first time wandering around. It’s a vibrant and lively city and makes for a perfect jumping-off point for exploring the area nearby. For dinner, we ate at Palaty at the recommendation of one of our local friends. The staff was extremely friendly and knowledgeable about wine and food which made for an excellent meal. 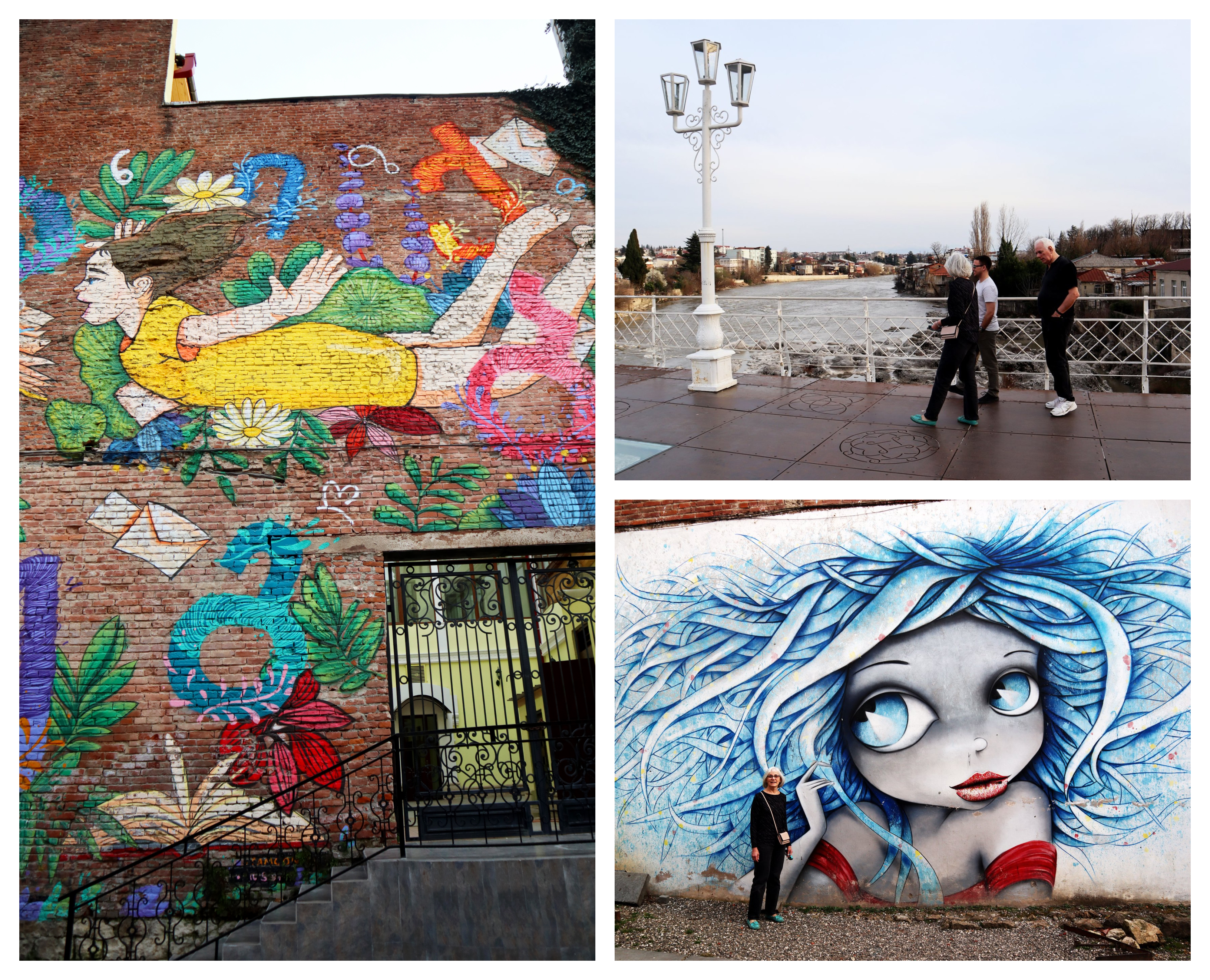 After breakfast at the Best Western, we checked out of our hotel and hit the road again. This day we were headed to Sataplia Nature Reserve to see some dinosaur footprints and one of Georgia’s fascinating caves. The Park was founded in 1935 to protect the newly-discovered cave with its exotic stalactites and stalagmites, the Colchian forest, and, perhaps most importantly, geological and archaeological sites. In 2010 and 2011 the Sataplia Reserve was developed to accommodate tourists with a visitor center, museum, interactive kid’s area, observation deck, and well-lined footpath. We had a guide show us to the dinosaur footprint enclosure, as well as the cave. Her tour took about an hour and then we were left to explore the reserve ourselves. It was a fascinating experience that doesn’t take up a full day which is really nice. 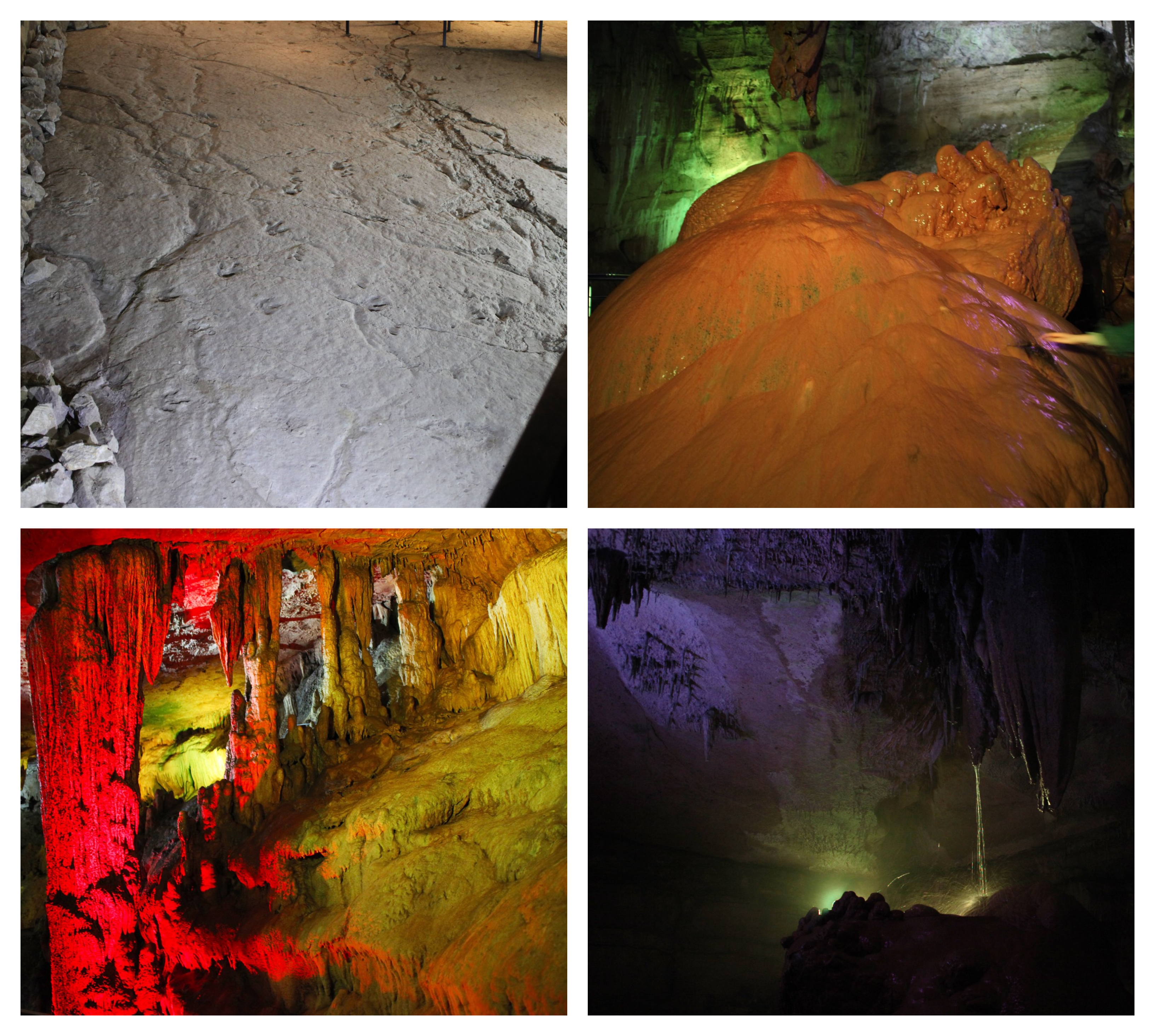 Out in this part of Georiga, there are many other cave systems, as well as several canyons and gorges you can explore. We chose to check out Okatse Canyon before continuing our journey west to the Black Sea. This particular canyon features a steel walkway overlooking the river which stunning views below. You can pay for a van to take you part of the way, but we opted out and hiked through the forest instead. It’s not necessarily an easy hike, but not too terribly strenuous either. The portion of the walk in the canyon itself is fascinating but does require quite a lot of stairs. I’m really glad we did this in March with cooler weather. This would be much more difficult in summer with hotter temperatures. 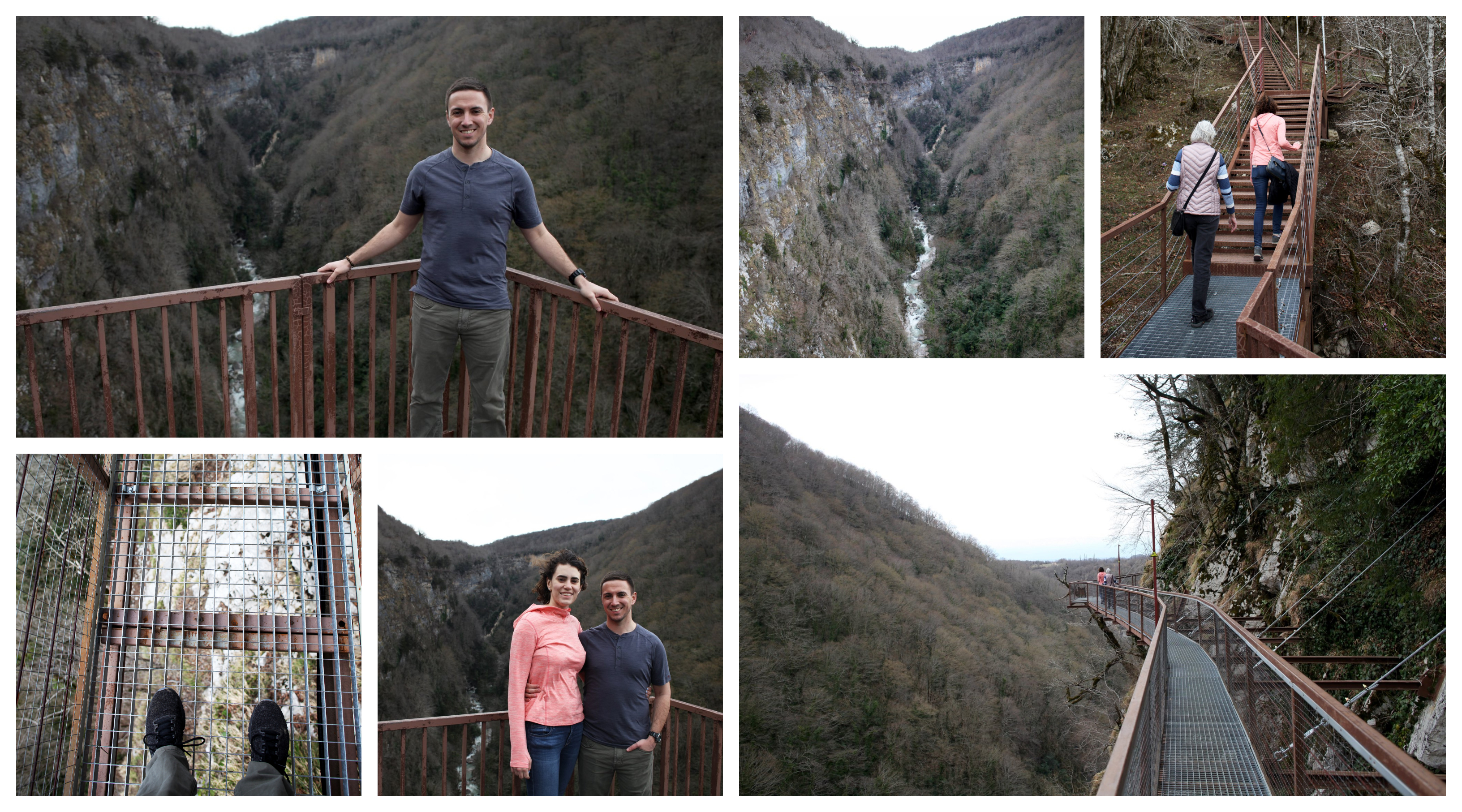 After the canyon walk, we drove two hours further west to Paragraph Resort on the Black Sea. I’ve written about Paragraph several times, and this was my third (Sean’s sixth) visit to this fabulous hotel. The customer service at Paragraph is always suburb, the pools and waterslides are a ton of fun, the food is great, and you can’t beat the stunning views. My mom, who loves all things water, was in absolute heaven. 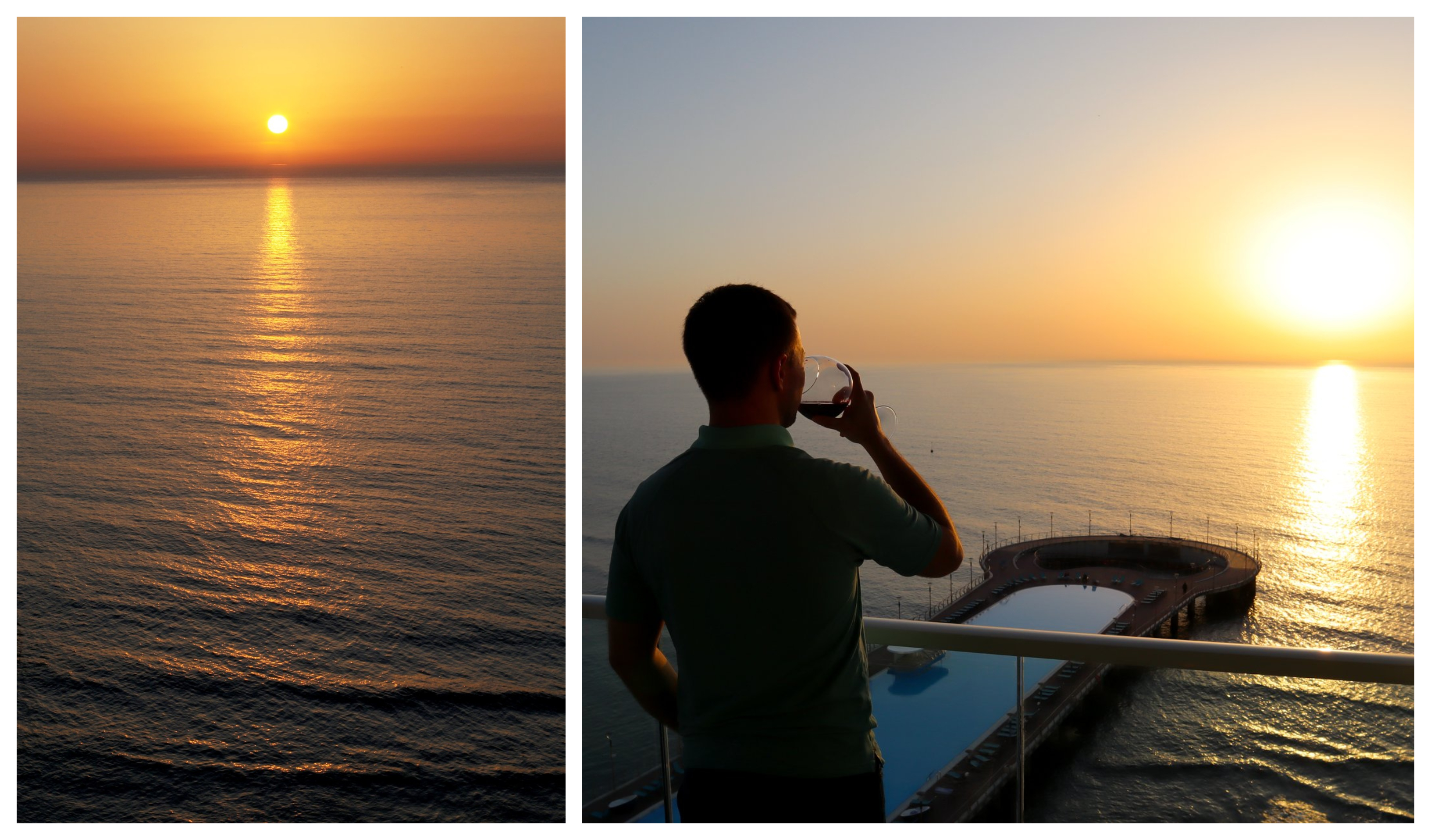 On our third day out west, we decided to drive about an hour south along the Black Sea coast to Batumi. Sean has been to this city many times, but this was my first experience in this vibrant port city. Batumi is only about 30 minutes from the Turkish border, and you can see a great deal of their influence everywhere you look. We wanted to take a trip to Istanbul during out time in Georiga since we’re so close, but with COVID-19 that didn’t ever come to fruition. With our few hours in Batumi, however, I feel like I got a bit of a taste of Turkey without ever leaving Georgia.

Batumi is one of those cities that really comes alive in the warmer months. There is a beautiful 2-kilometer boardwalk that runs along the Black Sea with tons of pop up vendors and restaurants with outdoor seating. The boardwalk is also home to the famous Ali and Nino moving statue. Ali and Nino are Georiga’s Romeo and Juliet. The story is set in 1937 and features Ali, an Azerbaijani Muslim who falls in love with Georgian princess, Nino, but sadly they are kept apart by World War II. The statue was built in 2010 and every 30 minutes or so, the two figures slide towards each other, eventually merging as their segments pass between each other. We happened to witness one such pass. 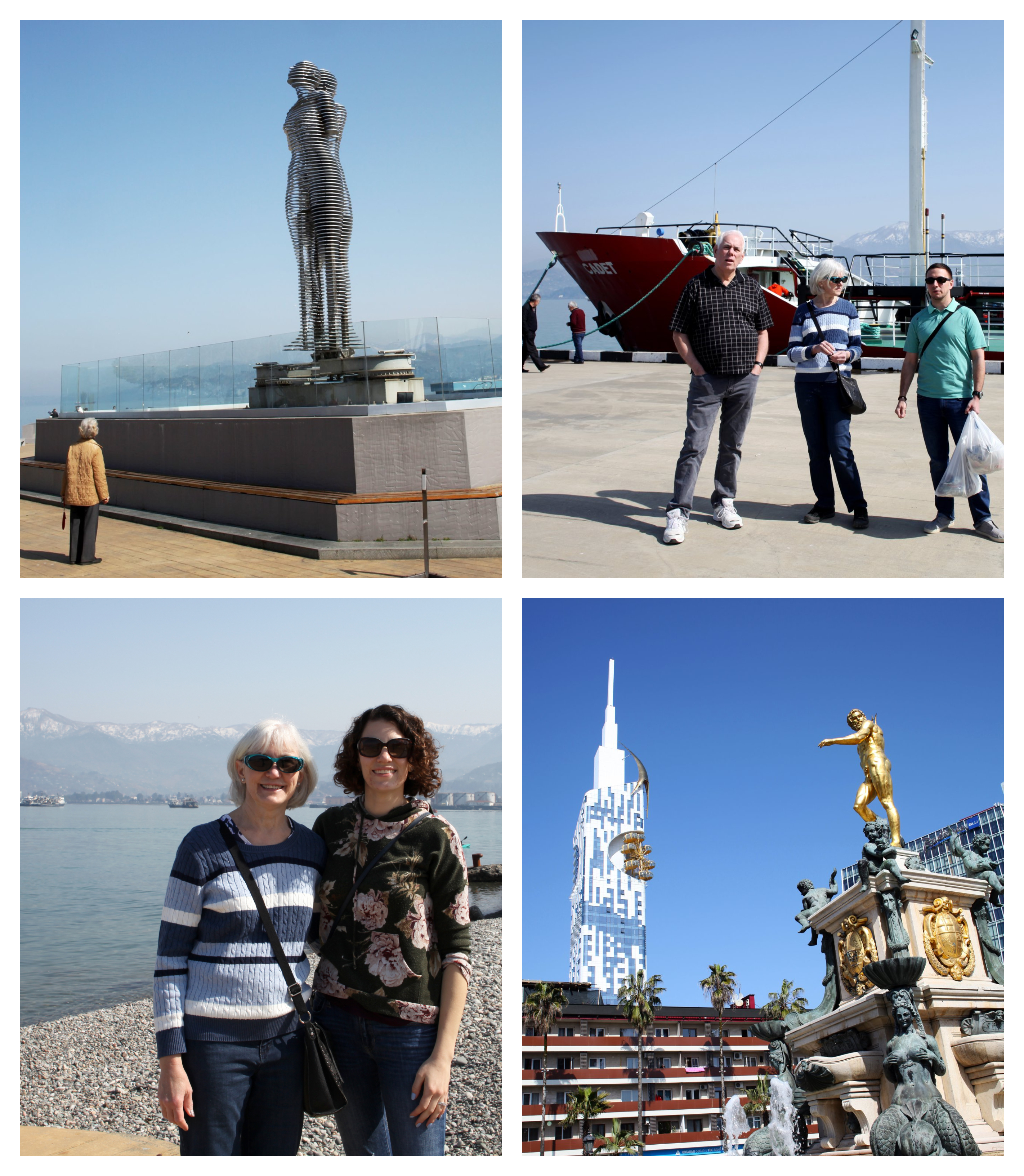 We visited Batumi on a Monday so quite a few places Sean wanted to show us were closed, but we did stop for gelato at Bellamia and was super tasty. (Yes, you can also stop at Luca Polare which is always yummy, but Bellamia is a local shop and I always like supporting little mom and pop restaurants if I can.) We didn’t end up stopping for lunch in Batumi since most everything was closed, but I can recommend Radio Kitchen & Bar when you’re in town. Sean swears by it, and I always trust his judgment when it comes to food.

We returned to Paragraph in the early afternoon to enjoy a relaxing day of swimming and lounging by the poolside before our long drive back to Tbilisi the following day.

Our final day of the trip was largely spent slowly making our way back to Tbilisi. It’s about a five-hour drive from Paragraph back to the capital, and after a few busy days, I think we were all ready for an easy day in the car. However, we knew we wanted to make a few quick pit stops along the way, particularly Shrosha for pottery shopping and the slightly-infamous “Bread Town” (formally named Surami) for their sweet raisin bread.

Since arriving in Georgia two years ago, Sean’s been begging me to get a kvevri, the large clay pots used for fermentation in Georgian winemaking. I’ve been more than a little reluctant to say yes (I refuse to allow him to set up a winemaking operation in the backyard of our Maryland home) but after two years he’s worn me down (though I’m still not entirely sure what we’ll do with the two we ended up purchasing). We were told by local friends that Shrosha is the best place for a pottery stop so we decided to try out a few roadside shops as we made our way back to Tbilisi. Kvevri range in price widely depending upon size, and the two we purchased ended up being 65 GEL for the medium-size and 30 GEL for the little one. 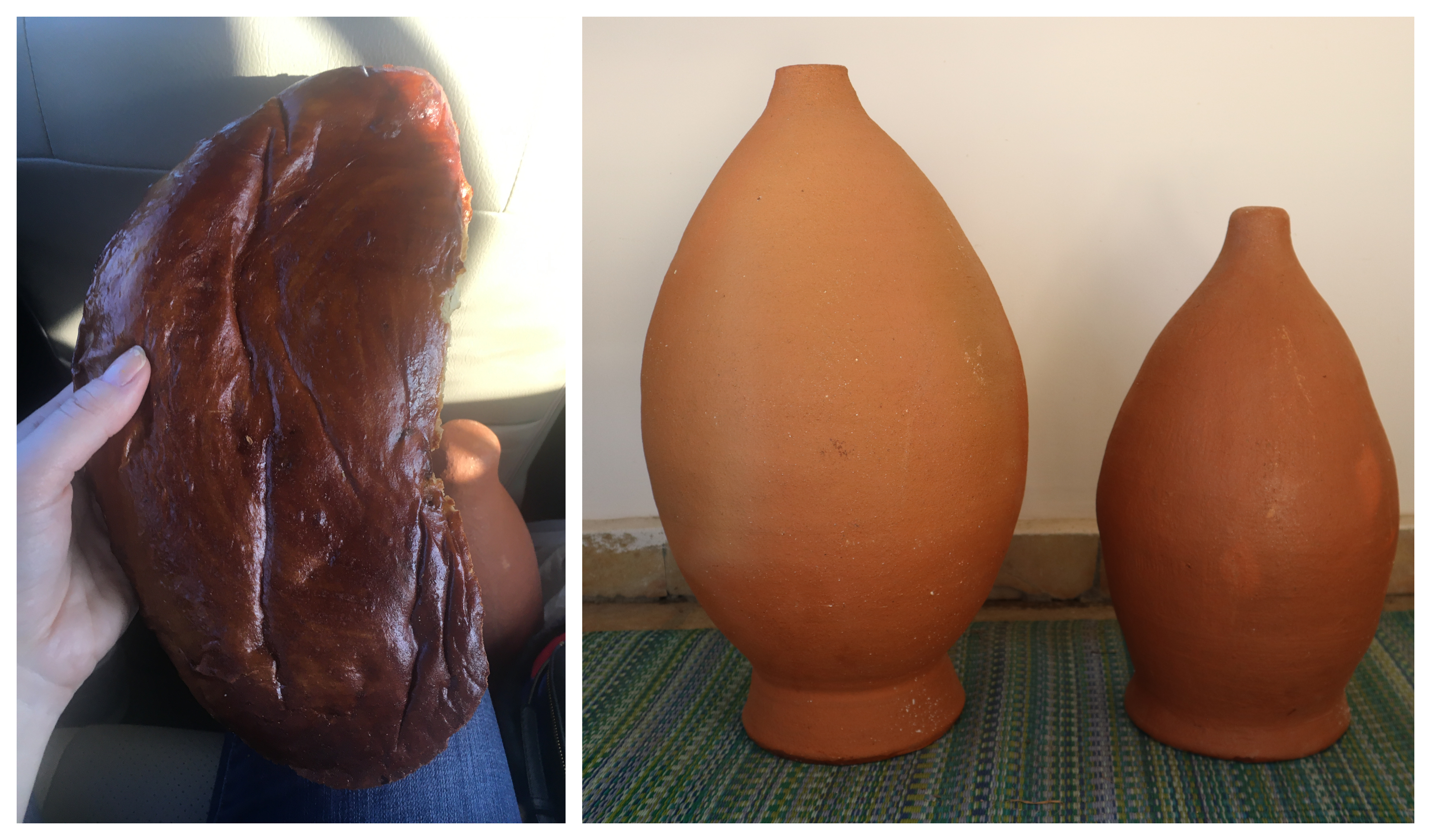 Our second stop on our journey home was the town of Surami for their sweet raisin bread. If you ask western expats in Georgia, there’s a good chance you’ll hear Surami affectionately referred to as “Bread Town.” It’s one of my favorite things to do anytime we drive between Borjomi and Kutaisi. You round a bend on the narrow two-lane highway and suddenly hundreds of women are enthusiastically waving fresh homemade bread at you. The raisin bread is actually called nazuki, and I found a great article from 2015 explaining more about this elusive treat. We always stop for a least a few loaves. They are served hot and fresh from the oven and cost about 2 GEL each. Truth be told, this was probably one of my dad’s favorite parts of the whole trip.

Whether you’re an expat living in Tbilisi or a traveler with only a few weeks in this beautiful country, I hope this blog was useful and gave you some ideas for planning your own trip. If you have any suggestions or other ideas please leave them in the comments below. I’d love to hear from you! 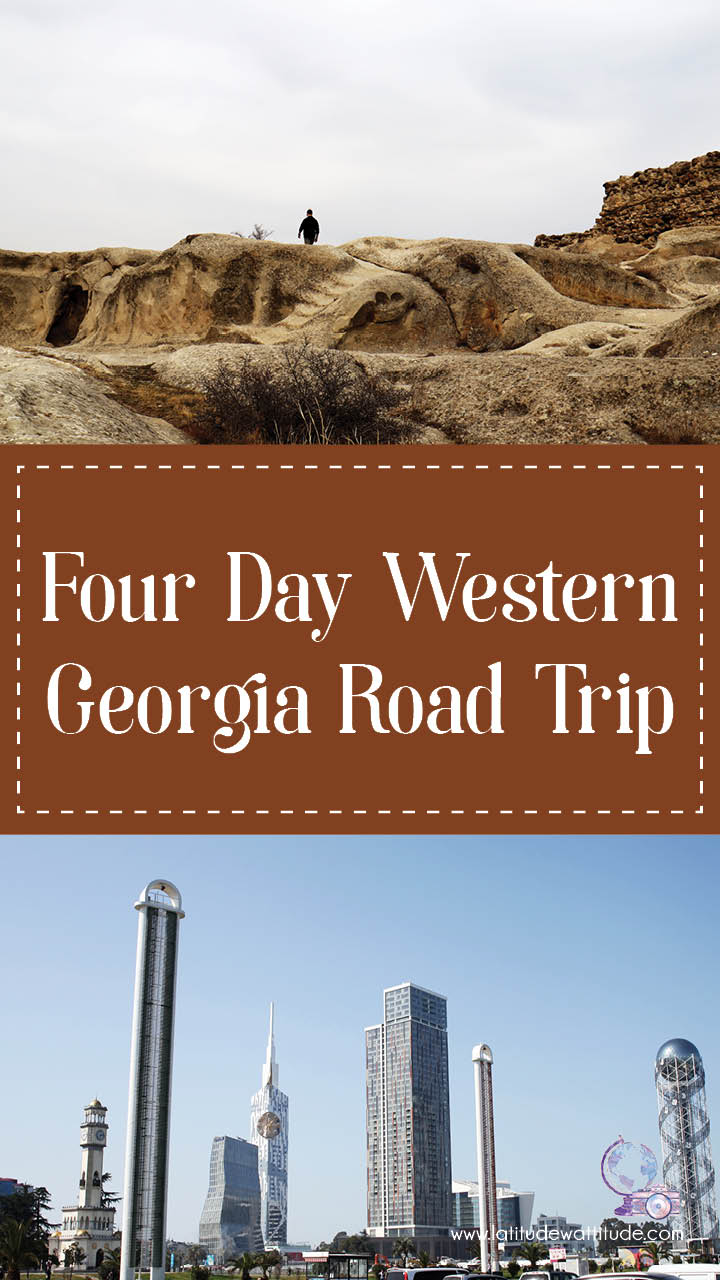