This will come as a surprise to anyone who doesn’t know me in real life: I’m currently six months pregnant. I’ve chosen to keep my pregnancy off the blog for a few reasons that I may discuss at a later date.

For anyone curious: I’m due in October. It’s a little girl. We are extremely excited and Sean has been the most understanding and supportive partner I could ever ask for as we navigate these uncharted waters.

Today, however, I want to talk about my attitude and struggles regarding my body and pregnancy. I’ve always wondered how my body would respond to growing a human being for nine months, and honestly, (mostly) so far, so ok. She gave me some issues early on but once I hit the second trimester I was feeling so much more like my old self aside from the basketball in my midsection I’m not used to being there. Up until recently I could fit into a lot of my normal clothes, and could mostly hide my belly if I wanted to.

However. From pretty early in this pregnancy I started noticing a decrease in what my body could do. It’s rather alarming.

If I had become pregnant a few years ago I think my attitude towards my body would have been focused on how it looks rather than what it can do. I wrote an essay about this a few years ago called “Dear Body” where I made promises to myself to listen to my body and take better care of it than I had for years prior. I’m happy to say I think I’ve stuck to those promises. I’m more excited now by completing a hard workout that fitting into a specific item of clothing. That attitude was years in the making and I’m proud to value myself based on what I can do rather than how I look.

During my first trimester I felt awful and though I was not on medically-ordered bed rest, due to some complications I essentially self-imposed bed rest upon myself. I didn’t (and still haven’t) have any crazy cravings so much as aversions so I wasn’t eating normally. It pretty much became whatever I could stomach for about 8-9 weeks. And, obviously, I wasn’t exercising.

When the issue causing the self-imposed bed rest subsided (good job baby girl!) and I finally started feeling better I tried to jump back into working out. I am following a pregnancy-specific workout plan for now so the routines are definitely lower-key than what I’m used to. I’ll never forget that first workout back.

I could barely lift my 5lb. dumbells. And I got winded almost immediately. I was shocked. Then, a few weeks ago we went to Kazbegi to recreate this picture: 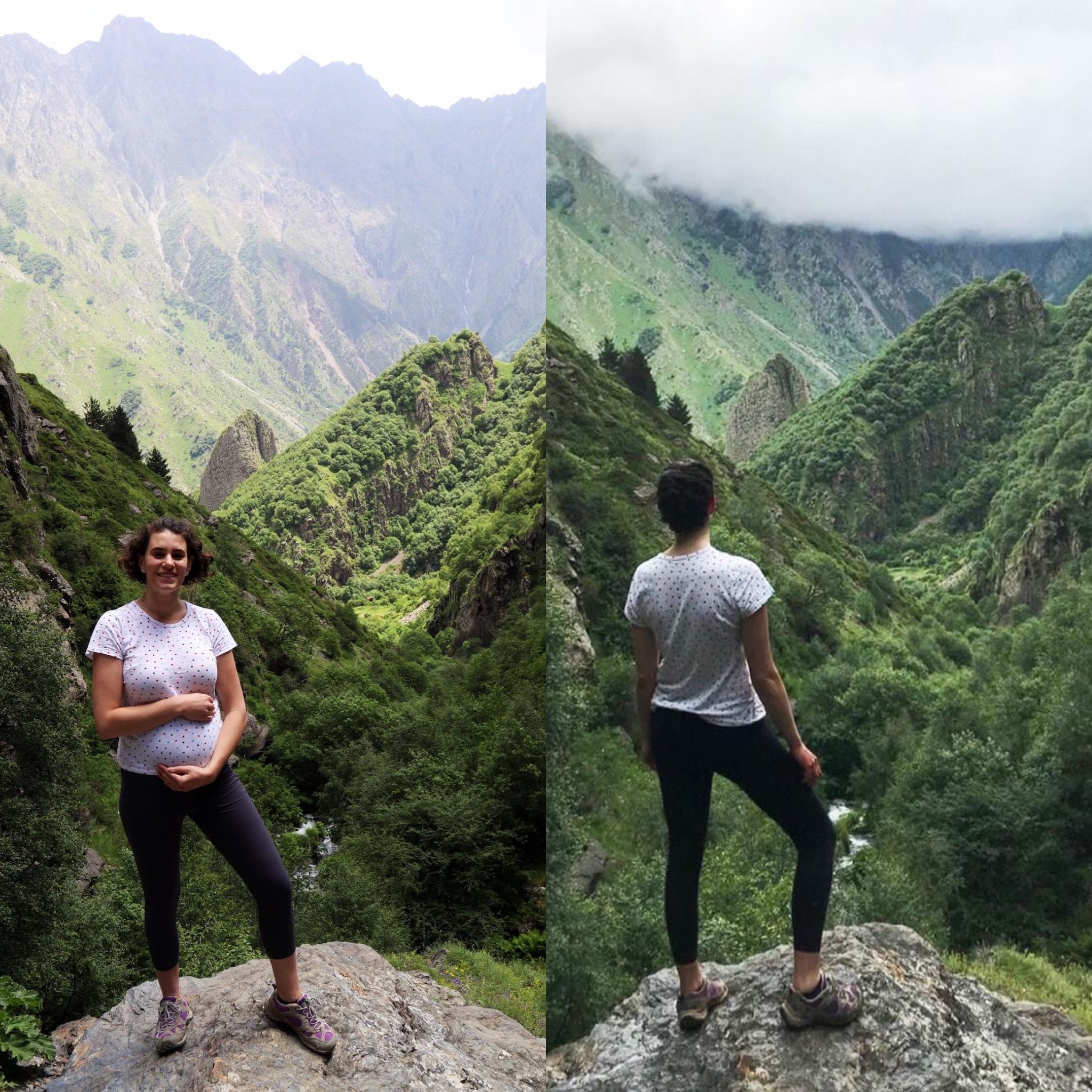 This relatively easy hike took me so much longer than normal. I get winded almost immediately. Frustrating, but I did it. But inside the tension was building.

Fast forward to this weekend. We went up to Mestia which is a hiking/trekking oasis here in Georgia. I knew going in that there was no way I’d be able to do some of the more extreme day hikes and definitely none of the overnight or multi-day excursions. I settled for a 3-mile hike up to a glacier. Sounds easy enough for someone who’s completed the Tongariro Alpine Crossing in New Zealand and the Seven Lakes trek in Tajikistan, right?

Wrong. The hike starts with a fairly steep incline and almost immediately I got so winded I had to stop. It seems like if I take more than five steps on an incline my breathing becomes ragged and my heart races. This isn’t safe for me or for baby. I think if it was just Sean and me I wouldn’t have felt too embarrassed by this, but we were with friends and I was determined to be that pregnant lady who can still keep up with the group. But, I realistically could only go about 10 feet uphill before I had to stop which left me embarrassed. I finally broke down in tears and told them to go on without me and I’ll just wait for them halfway up the first little hill.

As they left and I composed myself, I realized the main source of my embarrassment and frustration is coming from this: I’ve known exactly what my body is capable of for the last 30 years, and now every day I don’t know what to expect. I love being our baby’s home. I love feeling her moving around and knowing she’s safe and happy in there. I know that this is a temporary state of being and my breathing won’t be restricted like this forever. It doesn’t stop me from the surprise and embarrassment I feel when I fail at something that used to be easy.

Sean’s exact words were: I’m proud of you, but not surprised by you.

I had him take these two pictures, and I think you can see how just how elated I was.

The point of my story is this: if you’ve recently undergone a change – be it pregnancy, an injury, illness, whatever – and suddenly find yourself in an unfamiliar body with unfamiliar abilities, it’s ok. The only constant in this world is change, and it’s ok to take time to rediscover your body and what it’s capable of.

I know my body will continue to surprise me in the next three months as we await baby girl’s arrival, and I’m hoping between the hormone storms I can recognize and understand that these changes are normal and likely not permanent.

Suffice it to say, the following day I did not participate in the grueling 5-hour hike straight uphill to Koruldi Lakes. Instead, I hired a driver. More on that next week. 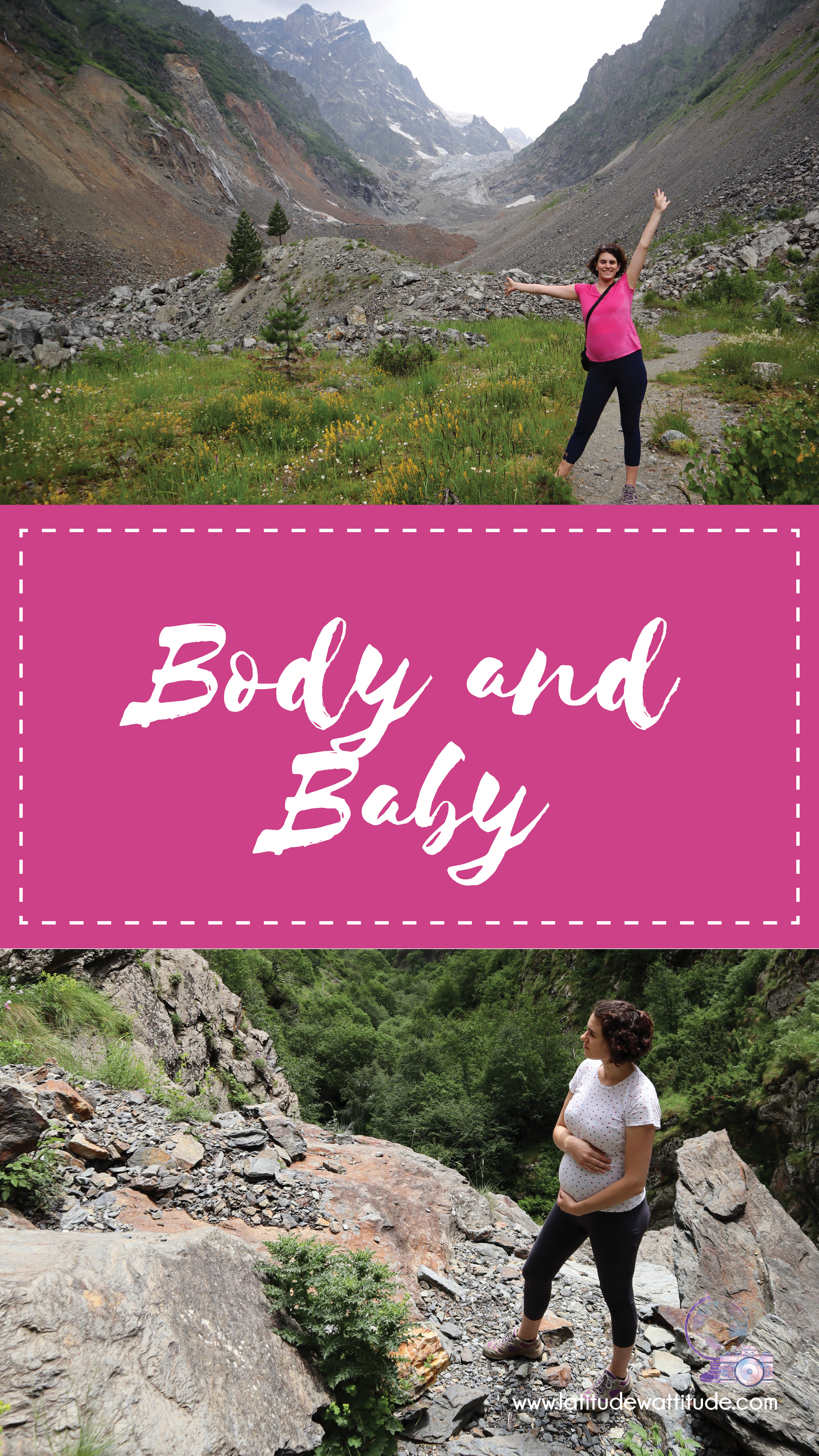 2 thoughts on “Body and Baby”