Svaneti is one of those far-away places that is a bit difficult to get to, but an absolute must-see if you have the time. As expats who have lived here two years, I feel like we had no excuse to miss this little corner of Georgia. We took a few days off work, grabbed a few friends, piled into the car, and headed northwest for five days of exploring this remote and tranquil region.

Day One: Drive to Kutaisi and Overnight

Everyone on this trip ended up working a half-day, so we left Tbilisi around 2:30 pm with Kutaisi as our destination. I spoke about Kutaisi as a great halfway point for traveling out West in my blog post from a few weeks ago, and it served the same purpose. We stayed at the same Best Western and had dinner at Sisters Restaurant at the recommendation of some friends. It was another relaxing and delicious meal in Kutaisi, and I maintain that this is the perfect stop to break up a long drive out West.

The second day of this trip is where the fun really began. We got up early to catch a few sights in the area before continuing to Mestia in Svaneti. We began our day at Bagrati Cathedral, also known as Cathedral of the Dormition, an 11th-Century masterpiece of Georgian architecture that has been lovingly maintained and restored over the years. We spent about 20 minutes exploring the interior and grounds (accompanied by the friendly resident dogs) before making our way out to town to Prometheus Cave. 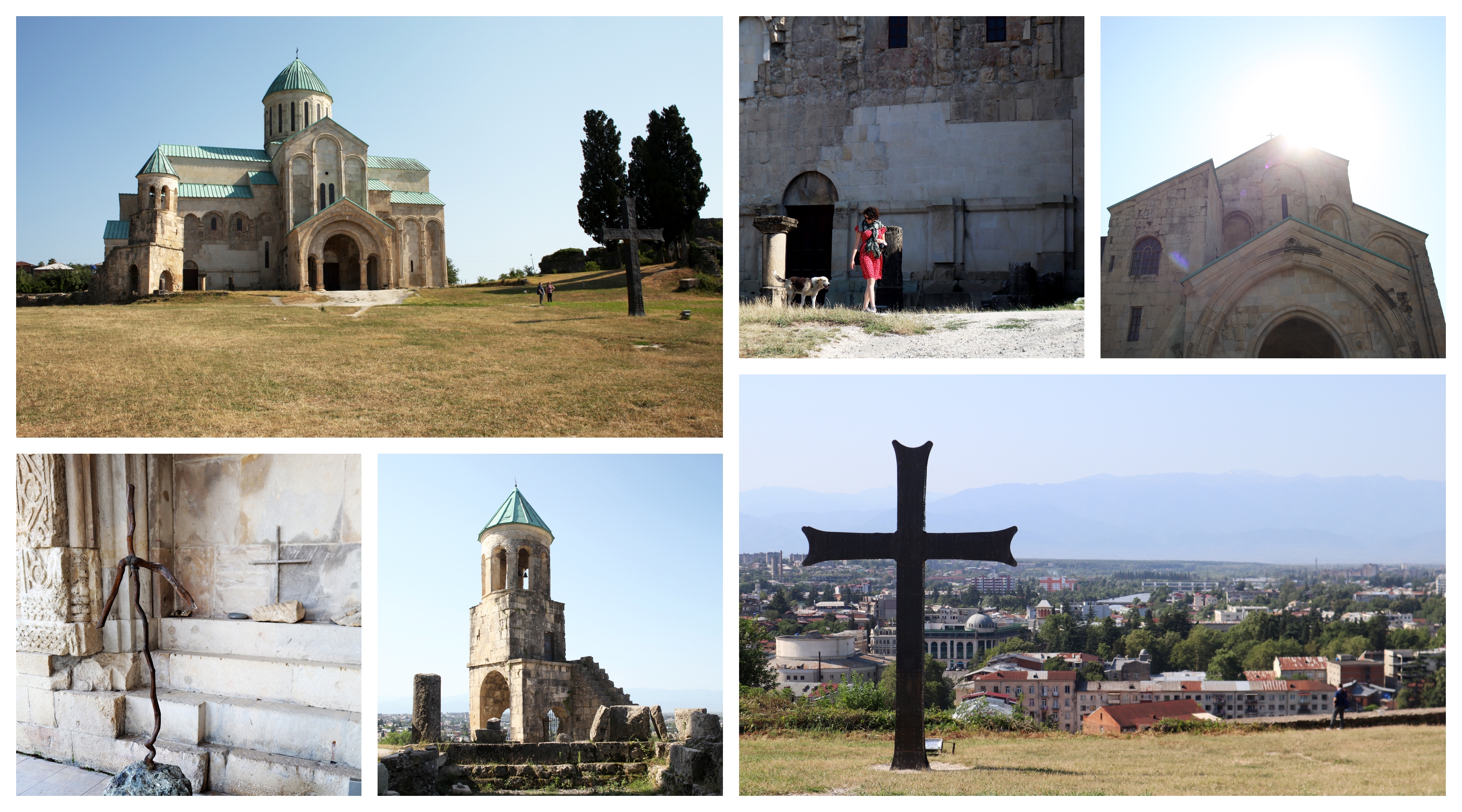 Since arriving in Georgia two years ago, Sean’s been bugging me about visiting Prometheus Cave. I wouldn’t say I was opposed to seeing it, it just never was a priority. Especially after visiting Sataplia back in March. But the thing about this particular cave, is the tie to Greek Mythology – hence Sean’s insistence that we visit. Prometheus the Titan and Epimetheus were given the task of creating man. The two ended up annoying Zeus when they stole fire from the gods for man and for refused to tell Zeus which of his children would dethrone him. As a result of this, Zeus ordered his servants to seize Prometheus, take him to the Caucasus Mountains, and chain him to a rock with unbreakable bonds. Legend has it that the rock Prometheus was chained to lies in this cave. Now, it’s not the only cave in the area making such a bold claim, but it’s the closest one to us, so we had to visit.

The cave itself is quite impressive and the journey though is guided which makes for an enjoyable experience. There are quite a lot of stairs which was a bit difficult for me with my slightly impaired breathing these days, but I managed just fine. To exit the cave, there are two options – you can either go on foot or pay extra to take a boat. We chose the boat ride, which gave off very Phantom of the Opera vibes. Well worth the extra 11 GEL. 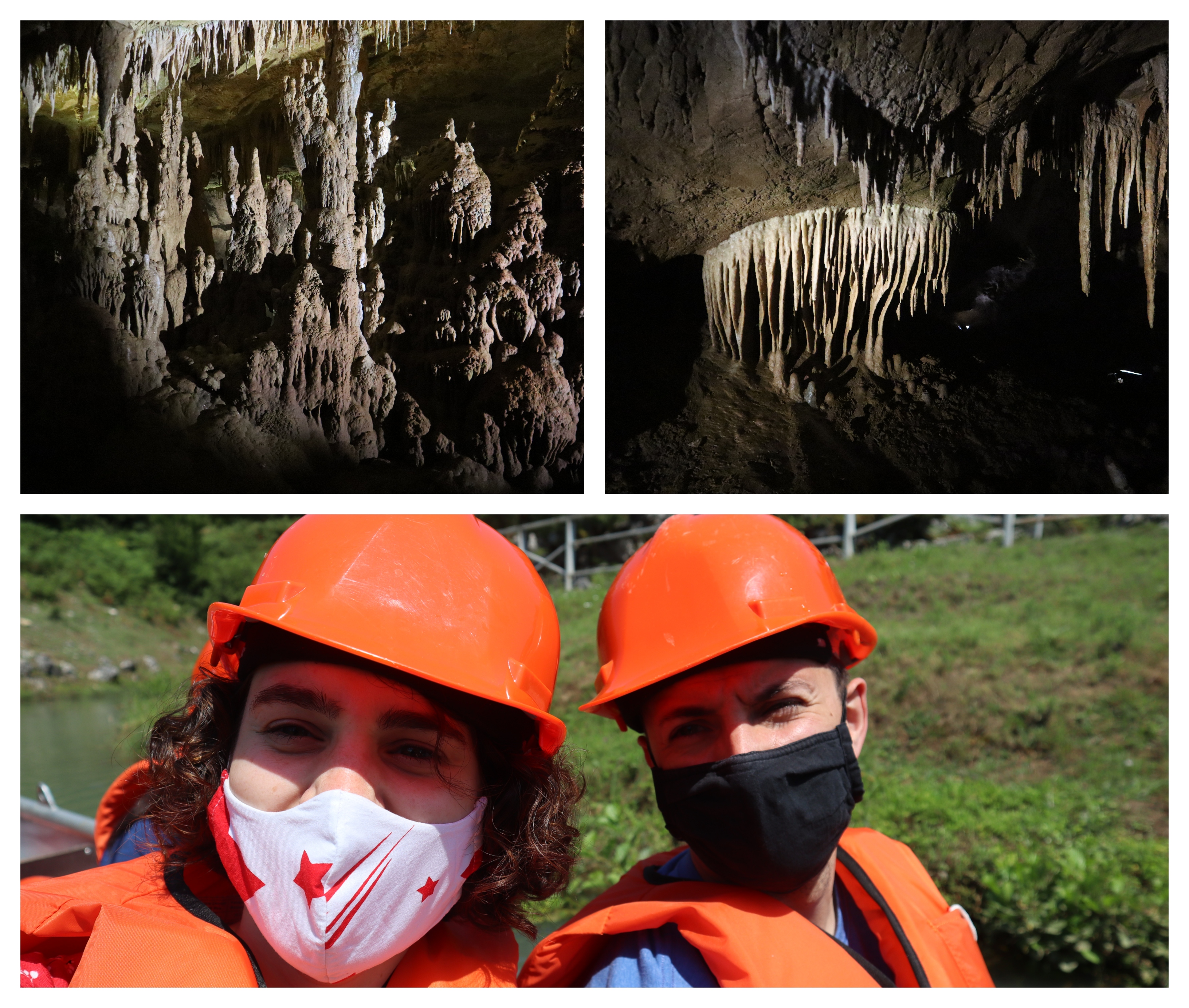 From Prometheus, we left Imereti for Svaneti and Mestia. From the cave, the drive was about 4.5 hours. The road up to Mestia is largely quite good though a bit windy and steep in places. I think it would be much more perilous in winter, but in summer it’s a lot easier than other roads we’ve been on. Our accommodations for the next three days was Posta Hotel which is a relatively new property in town. We had spacious, comfortable, and clean rooms and the staff was largely friendly and helpful. Breakfast was included which is always a plus, and their spread was pretty impressive. One thing to note, there is currently quite a bit of construction outside the hotel which can get very loud during the day and into the night. I don’t know if this would be alleviated anywhere else at the moment since it seems the whole town is under construction, but just something I wanted to note.

A few quick notes: If you have more time, you can also cram in Martvili Canyon before making your way to Mestia. We chose not to, but I think it’s definitely possible. Also, in Mestia, there are several options for homestays if you prefer that over hotels.

For our first full day in Svaneti, we had a pretty packed itinerary. Our first stop was a 1.5-hour drive to the nearby community of Ushguli. Ushguli is a community of four villages located at the head of the Enguri gorge. It is recognized by UNESCO as a World Heritage Site, is one of the highest continuously inhabited settlements in Europe. It is possible to do a trek from Mestia to Ushguli over the pass, but we chose to drive instead (mostly because there’s no way I would have made it at six months pregnant). The road out to Ushguli is pretty terrible and you definitely need a 4-wheel drive vehicle with a good amount of clearance. We picked our way along until we were about three kilometers from town when we were met with construction. Unfortunately, there had been a rockslide that morning and the road would be impassable for several hours. not wanting to get stuck on the other side, we decided to turn back. Thankfully we did manage to get some stunning photos of Ushba, one of the more striking mountains in Georgia with its twin peaks. 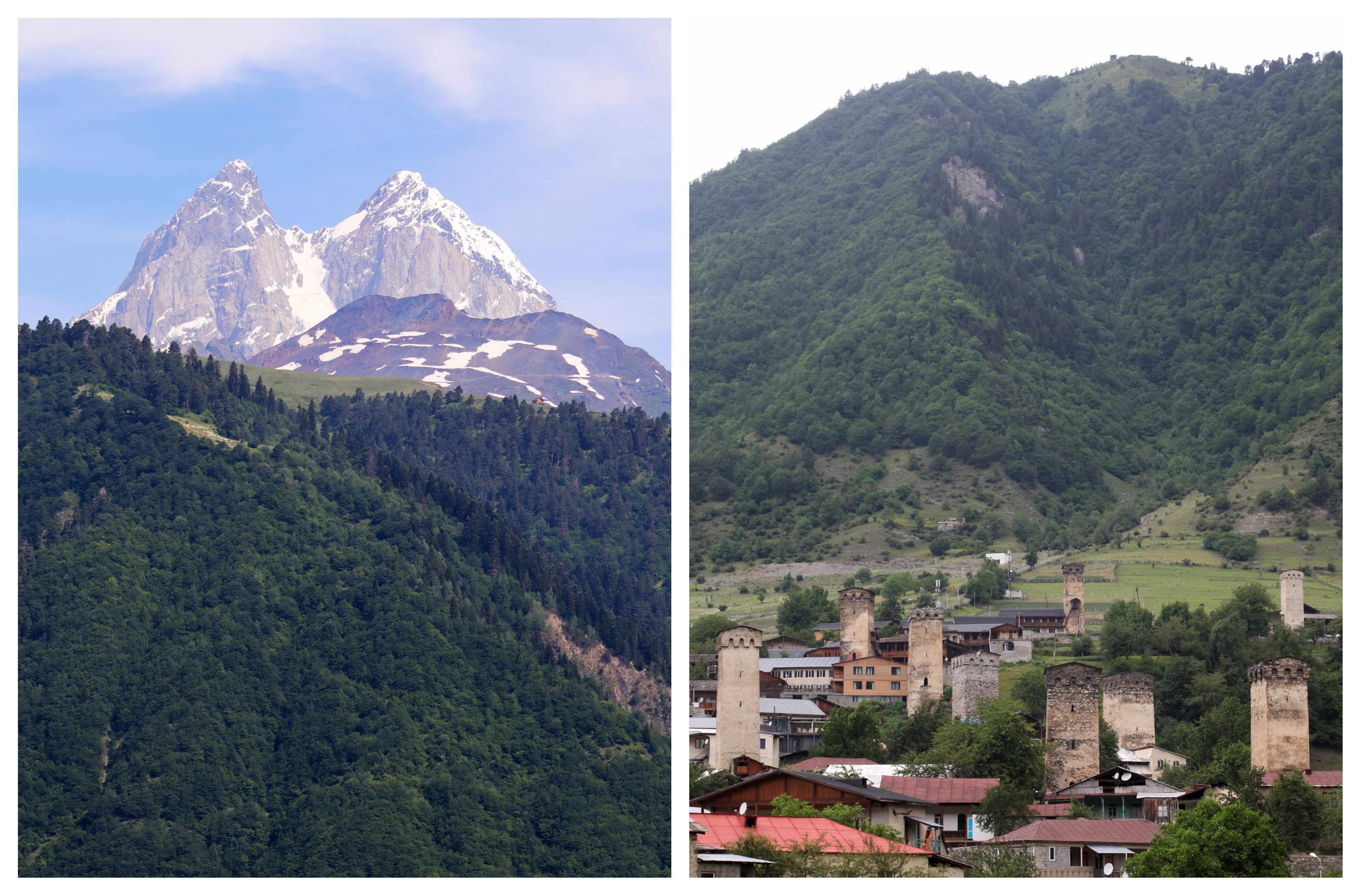 Along this road, there is a little roadside attraction known as the Tower of Love. I found mixed information about this legend online, but the consensus seems to be that two lovers were trapped in the tower for quite some time before they were rescued alive. Today it’s a tourist attraction and a chance for visitors to glimpse the inside of one of the famous Svan Towers. These towers are often built into houses and are used a defense from both human and natural threats such as avalanches or rockslides. The oldest towers date back to the 8th or 9th century, the newest was built in the 18th century. 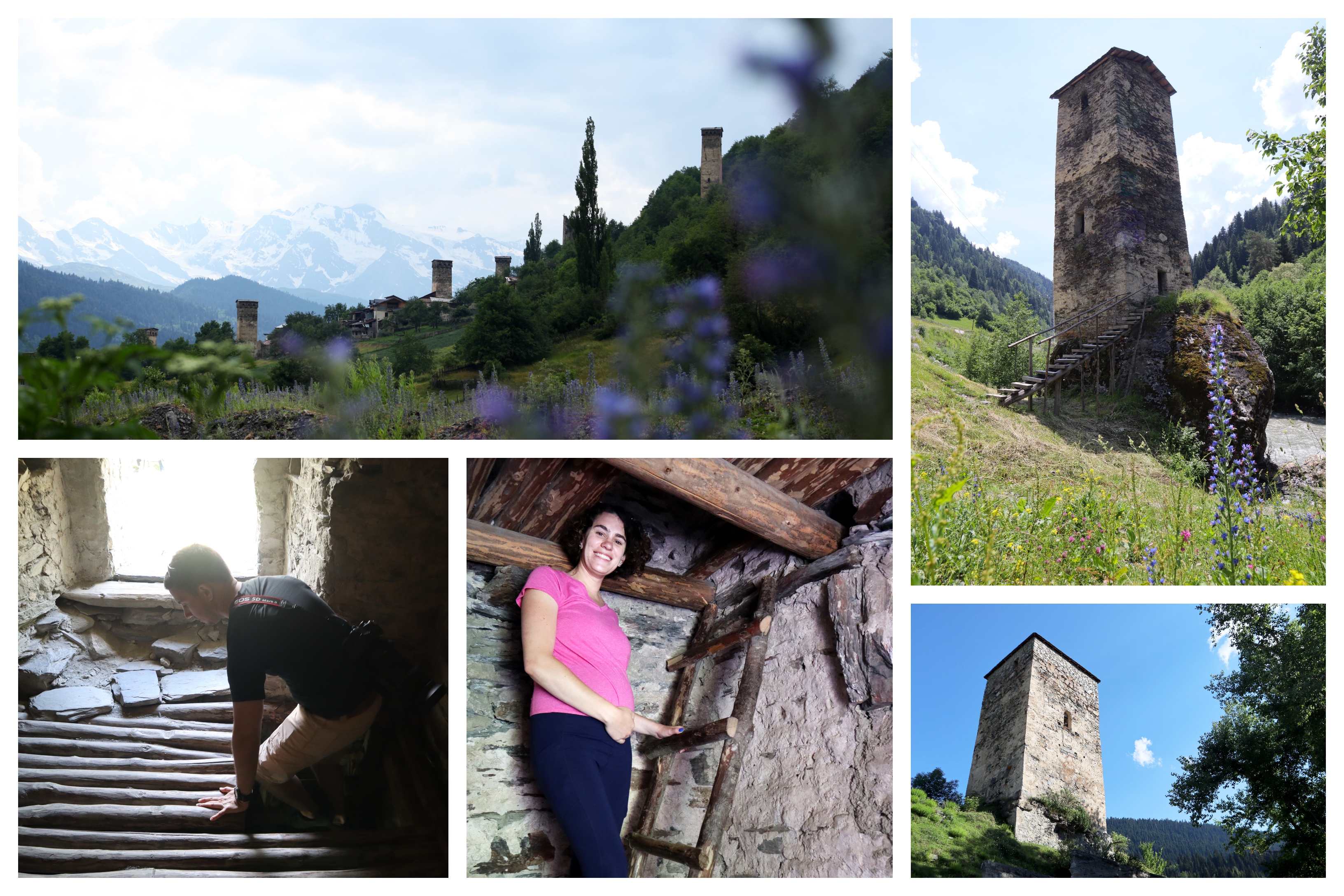 After the Tower of Love, we decided to hike the Chalaadi Glacier Trail which is a moderately-easy 2-3 hour hike from the “official” starting point. I spoke about this hike last week in my Body and Baby post, so I won’t go into too much detail here. I’d highly recommend this for less experienced hikers or folks with children. The bridge right at the start looks a little dicey but feels solid enough, and there’s a safe parking area right at the start to leave your car. 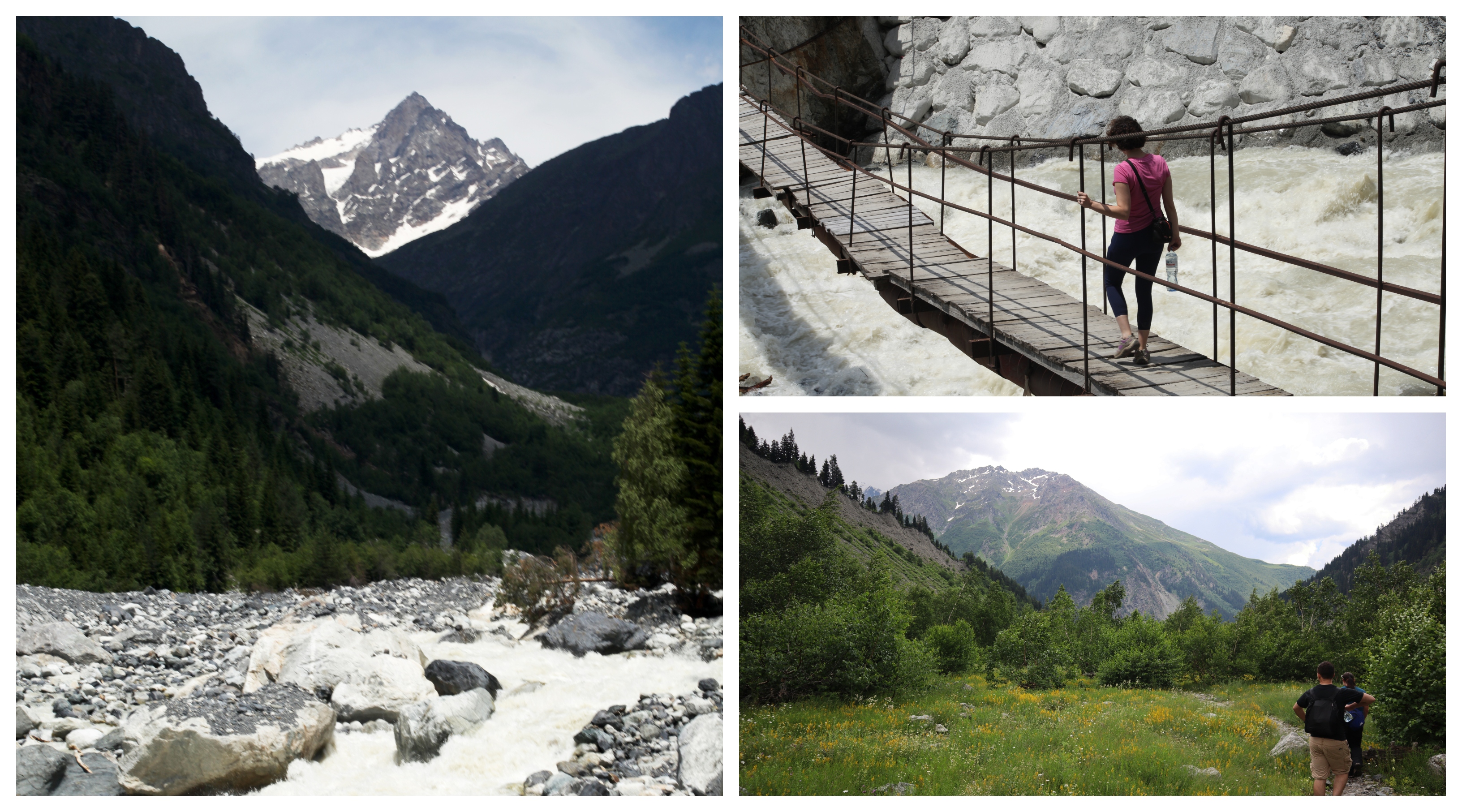 A few quick notes: It’s possible to hire a driver to take you to Ushguli if you don’t have a car with 4-wheel drive or don’t feel comfortable on bad roads. Depending upon the hotel, the likely can arrange it for you or put you in direct contact with drivers in the area.

For our last full day in Mestia, a few members of our group wanted to embark on a more challenging hike up to Koruldi Lakes, a grueling 5-7 hour trek uphill with a 1,400-meter elevation change up and down. I would have enthusiastically joined them, but after my experience hiking up to the glacier the day before, I figured it would be better for everyone – baby included – if I hired a driver for this one. So Sean and one of our friends left for the hike, and a few hours later our other friend and I started after them in a hired van. I’m glad we hired a driver who knows the roads well to navigate the tight switchbacks with sheer drops. We met them on the trail near the top and once the joined us about 30-minutes later, we all enjoyed a picnic lunch with some stunning scenery. 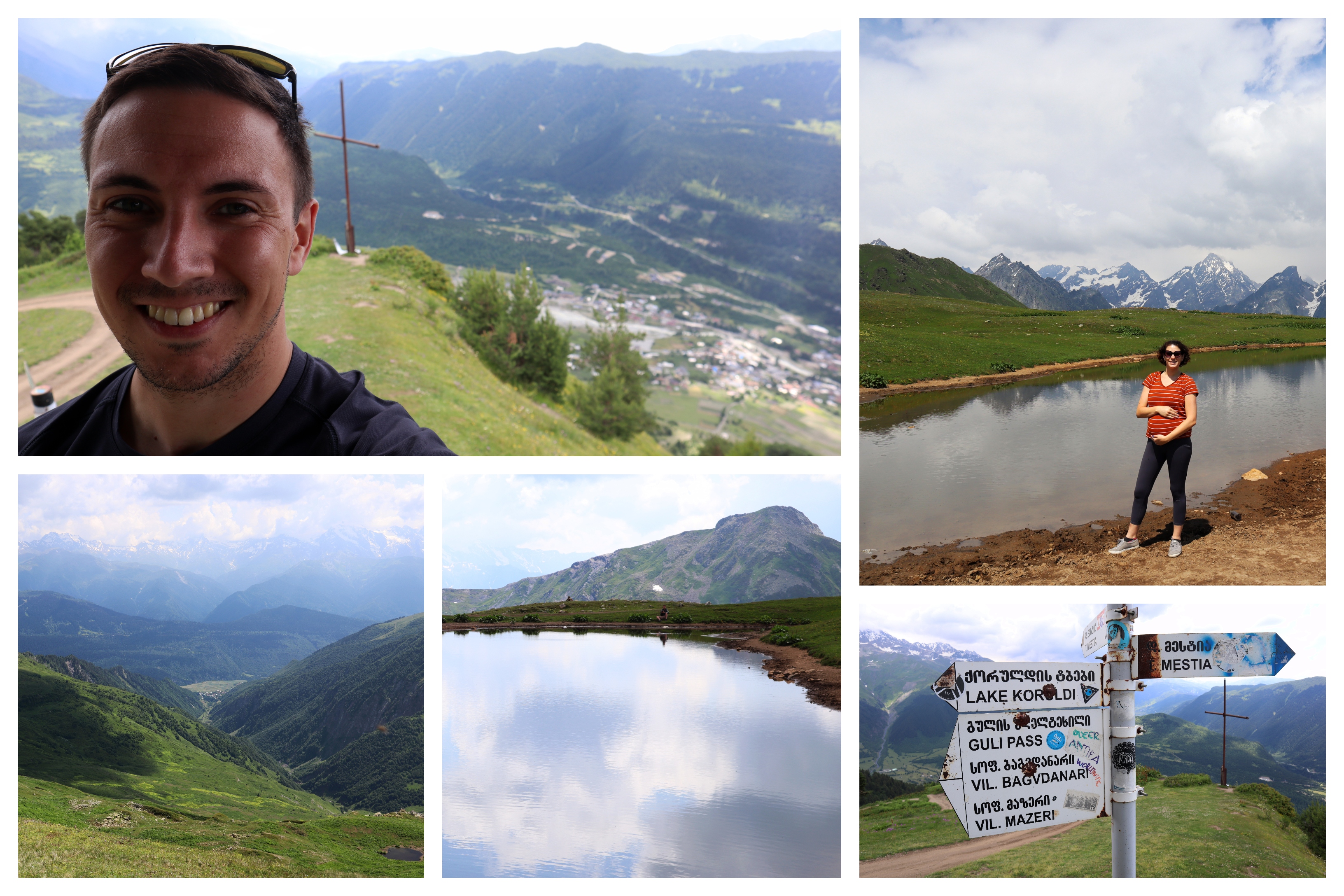 The Koruldi Lakes are nestled at the foot of Mt. Ushba, and though they themselves are not impressive, on calm days they reflect the mountains in the most beautiful way. Many hikers use this as a halfway point to more elevated viewpoints, but our group was perfectly content to stop here for the day. We were also visited by a beautiful herd of horses who graciously posed for some photos before moving along to higher ground. 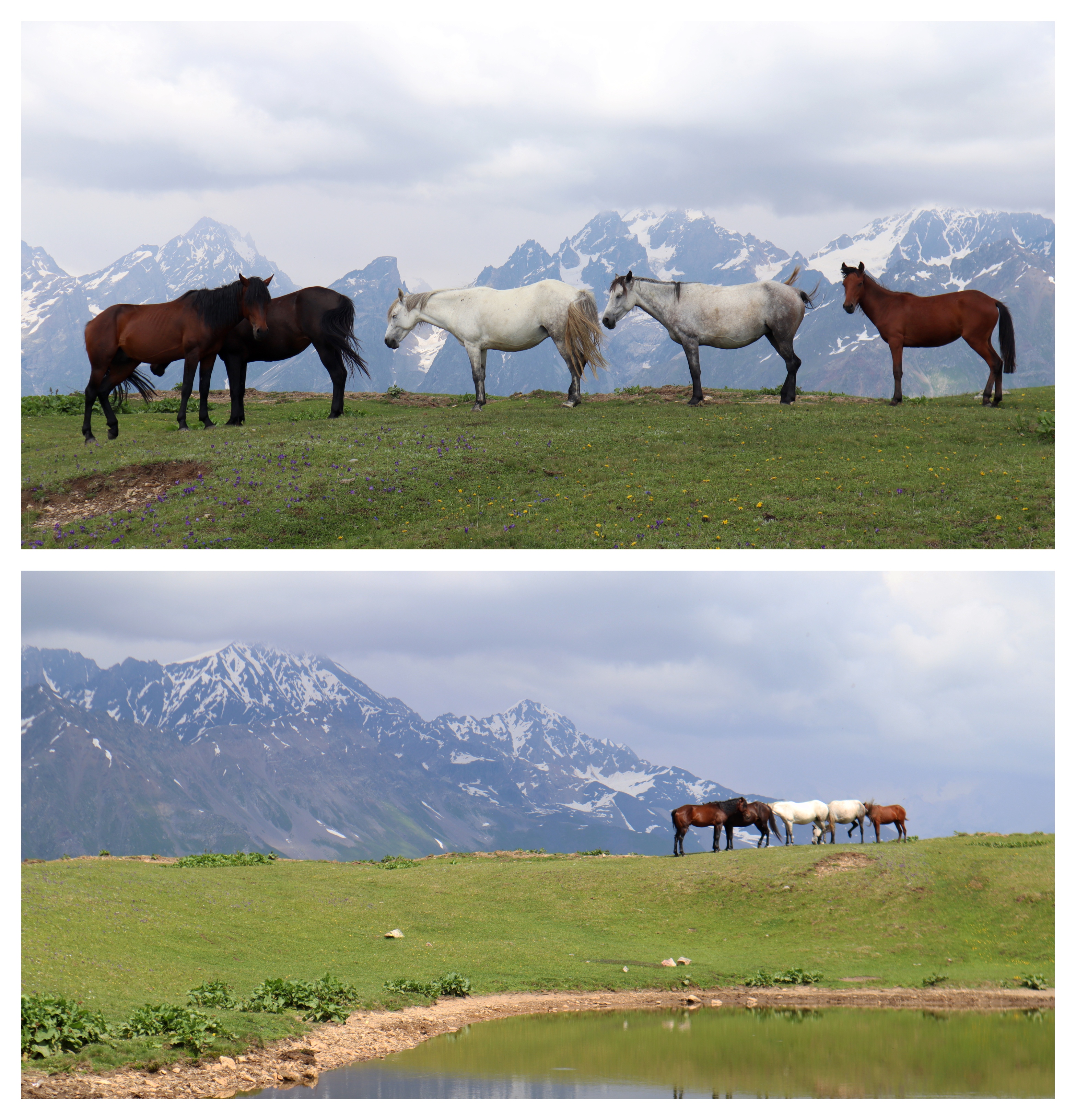 On our fifth and final day, we, sadly, spent most of the day in the car making our way back to Tbilisi. In total it takes about 8-hours to drive straight through. If you cut your time in Mestia short (though why would you!) or if you have an extra day, you could break up the drive back with a stop in Kutaisi again or Zugdidi. You could also add on Shekvetili or Batumi and then return to Tbilisi on more favorable, direct roads. The possibilities are endless, really!

If you have any other ideas for making the most of a trip to Svaneti, please feel free to comment below. Sadly, our time here is running thin, but we are already starting a list of ideas for a return to Georgia sometime in the future. 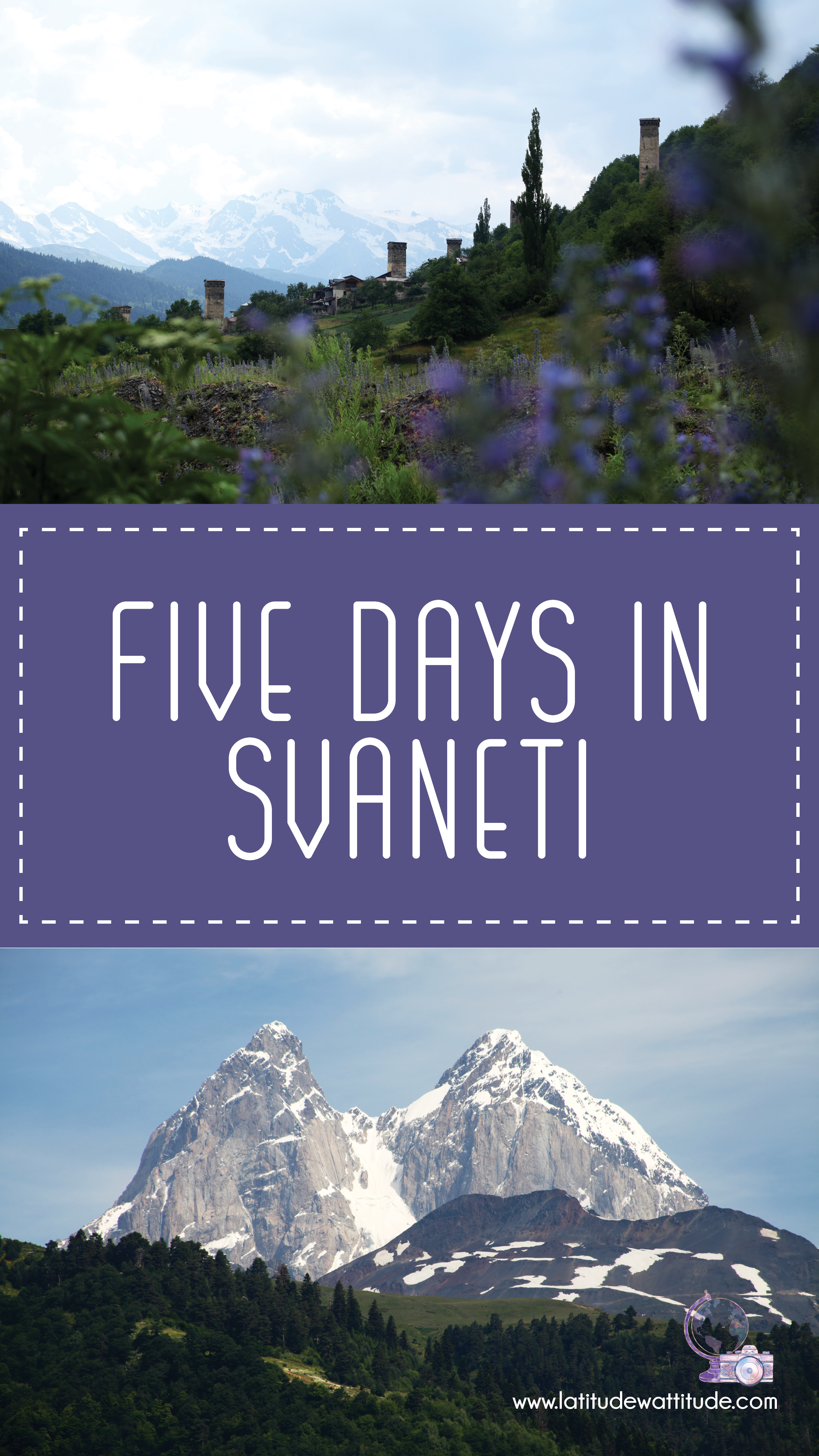 4 thoughts on “Five Days in Svaneti”